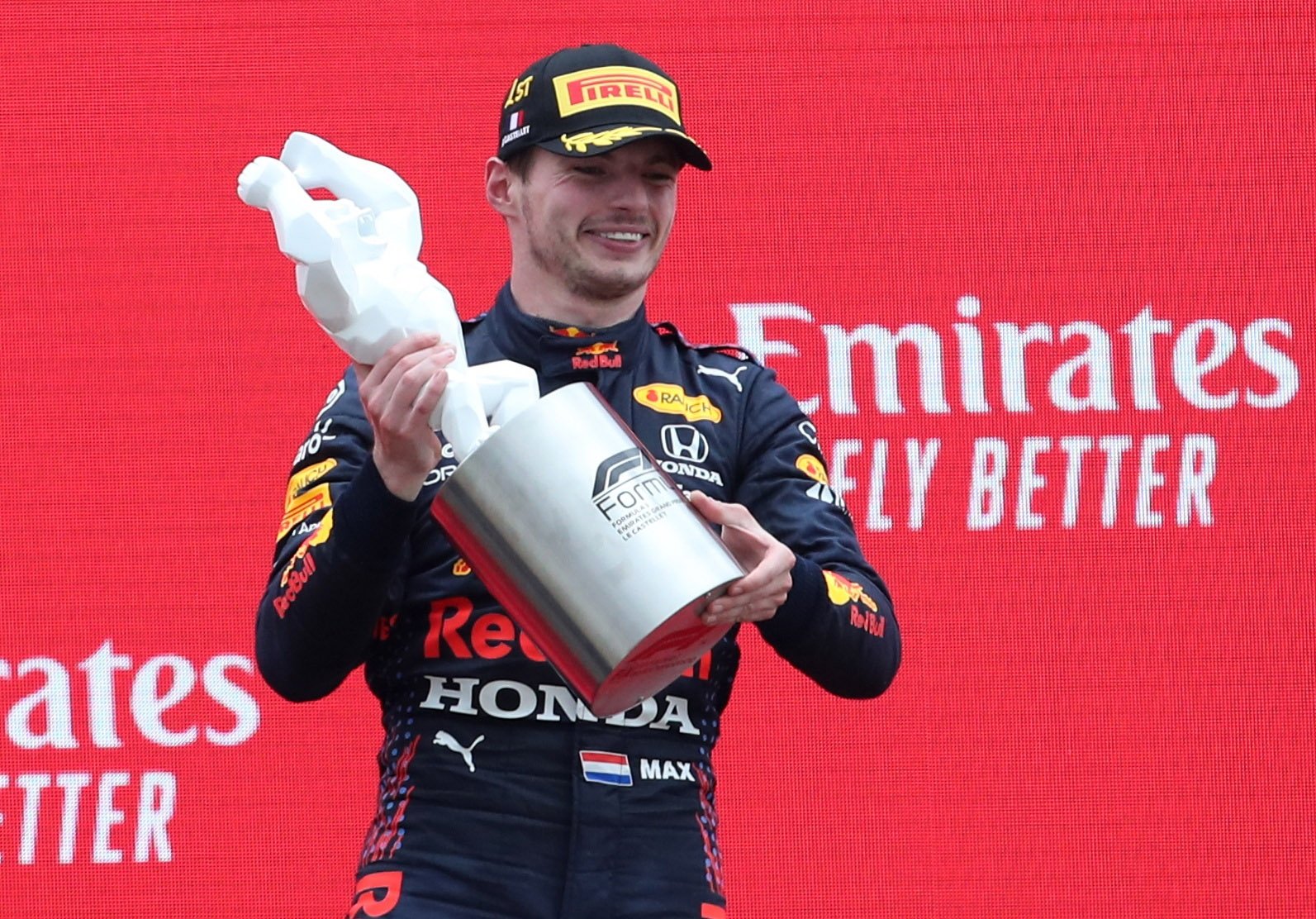 The win extends the Dutch's lead over Hamilton in the drivers' title race and leaves the Mercedes team "with a big fight" to retain control of its F1 fiefdom.

The Red Bull driver hunted down and overtook the world champion with over a lap to go at a gusty Le Castellet to claim his third win out of seven races this season.

"Towards the end I enjoyed it! At the beginning it was super difficult out there with the wind," said Verstappen.

This was a massive statement by the Dutch driver and his resurgent Red Bull team who won their third successive race after Monaco and Baku.

It pushed Verstappen 12 points clear of Hamilton ahead of back-to-back races on Red Bull turf in Austria.

Mercedes, for so long used to ruling the roost, are relishing the two-team title battle.

"We're in for a big fight this season and we'll have to dig deep as a team. We are up for it!" they tweeted.

Sergio Perez in the other Red Bull came in third with Valtteri Bottas in the second Mercedes finishing fourth at the circuit where the mesmerizing light blue and red striped contours evoked a trippy psychedelic 1960s album cover.

Red Bull team principal Christian Horner had said before the race "if we can beat them here we can beat them anywhere" of Mercedes, who was itching to get back onto a regular track like the Circuit Paul Ricard after getting lost on the streets of Monaco and Baku.

But things got off to a bumpy beginning for pole-sitter Verstappen, who went off the track in a horror start coming out of turn one, Hamilton accepting the unexpected gift to take the lead.

"I couldn't keep the car under control," complained Verstappen.

Hamilton had led 105 of the 106 laps for his wins here in 2018 and 2019, and he set about extending his near-total stranglehold at the Provencal track.

Approaching a third of the 53-lap race Hamilton had established a near three second gap back to Verstappen, with Bottas and Perez in pursuit.

With drivers starting to complain of tire wear Charles Leclerc was the first to come into the pits for a change of footwear for his Ferrari.

Verstappen wasn't far behind, with Hamilton coming in for a slick stop on lap 20, coming out as Verstappen flashed past with Perez, still to pit, the new leader.

The Mexican, winner in Baku last time out, was hauled in on lap 25, leaving Verstappen in the lead and Hamilton half a second behind.

"We can't keep this up until the end of the race that's for sure" Verstappen told his pits over the team radio referring to tires on lap 29.

And on lap 32 in he came in again, resuming in fourth, 25 seconds behind Hamilton, but with better grip he was only seven seconds behind in third by lap 40.

With nine laps to go Verstappen muscled past Bottas, the gap ahead to Hamilton just five seconds.

Hunting his prey down it made for an epic end for the 15,000 fans allowed in due to the easing of coronavirus restrictions in France.

And he duly picked off the Silver Arrows on the penultimate lap to trigger wild celebrations in the Red Bull garage.

"The whole race me and Lewis were fighting each other, so it will be like this the rest of the season," Verstappen said.

"You only having to look how close it is between the teams. It's nip and tuck for the championship."

He added that "today was payback for Barcelona!" in reference to how Mercedes had hoodwinked them with a two-stop strategy at the Spanish Grand Prix.

Hamilton was generous in his praise for Verstappen.

"Congrats to Max he did a great job today, they had the better strength all weekend."

The Briton, stuck on 98 career wins, added: "Considering we had such a difficult Friday I am really happy with today's result of course we didn't win and we was in the lead but I had no tyres left at the end so unfortunately lost the position but still it was a good race.