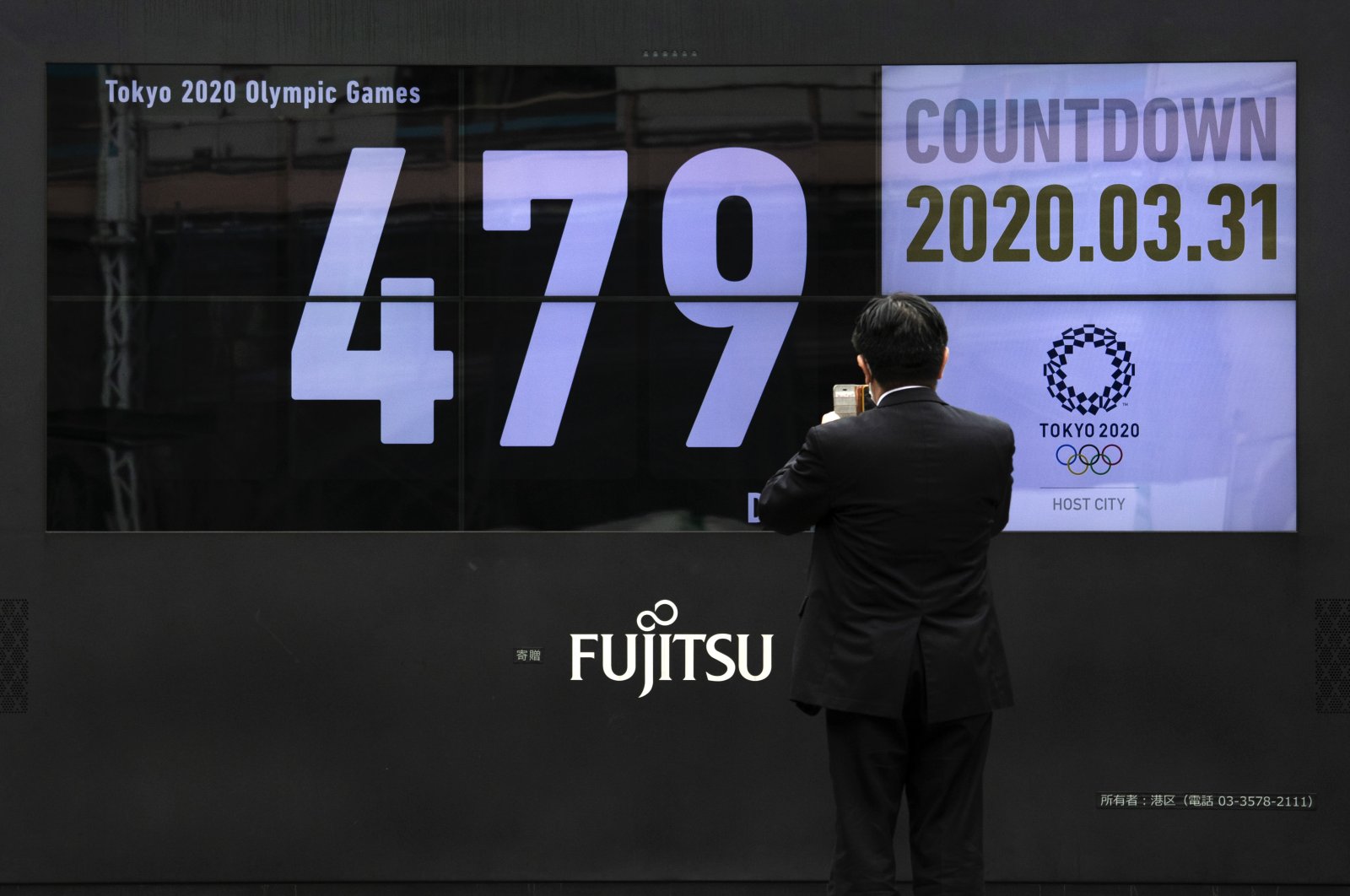 A man takes pictures of a countdown display for the Tokyo 2020 Olympics after it was restarted following the decision to postpone the Games, Tuesday, March 31, 2020, in Tokyo. (AP Photo)
by Compiled from Wire Services Apr 02, 2020 10:27 am
RECOMMENDED

The postponement of the Tokyo Olympics and the shutdown of the sporting calendar because of the coronavirus pandemic are expected to hit international sports federations hard financially.

Many sports that are part of the games depend heavily on the payouts every four years from the International Olympic Committee (IOC).

"The situation is tense and very gloomy. An assessment will be made, but clearly some posts are under threat," said an official of a major international federation.

The 28 international federations (IF) of the sports that were due to be present at the Tokyo Olympics would have received substantial sums from the IOC.

The postponement of the games until 2021, however, could lead to a freeze of their payment.

"We have a lot of international federations with substantial reserves, but others work on a different business model. They have income from major events which are suspended, which can be a problem for the cash flow if they don't have enough reserves," said Andrew Ryan, director general of the Association of International Olympic Summer Sports Federations (ASOIF), which is responsible for distributing this money.

The five additions to the Tokyo Games program – karate, surfing, skateboarding, climbing and baseball/softball – are not eligible.

The Olympic payout totaled $520 million after the Rio Games four years ago.

"The Olympic money could be less than for Rio 2016," Ryan warned. "My advice is to budget the same as in Rio".

The federations receive money on a sliding scale determined by their audience and size.

The three largest, athletics, swimming and gymnastics, can expect approximately $40 million. For the second tier, made up of cycling, basketball, volleyball, football and tennis, the sum is $25 million.

For group three, which contains eight sports, including boxing, rowing, judo and table tennis, it is $17 million. The nine sports in the next level, including sailing, canoeing and fencing, receive $12 million.

For the three in the last category, rugby, golf and modern pentathlon, the payout is $7 million.

Meanwhile, the largest associations, such as football's FIFA, which has a $1.5 billion nest egg, or basketball body FIBA which has $45.5 million in reserves, IOC aid represents a small proportion of their income.

But for others, it is vital.

"Some IF probably don't have the cash flow to survive one year," said Ryan.

For most federations, the postponement of the Olympic Games has a domino effect, forcing them to reschedule their own money-earning competitions.

"The revenues from these events will eventually come in," said Ryan. "But this impacts the cash flow."

World Athletics has already postponed the 2021 World Championships in Eugene, Oregon, to 2022.

The International Swimming Federation (FINA) will have to do the same for its World Championships scheduled for next summer in Fukuoka, Japan, when they would probably clash with the Tokyo Games.

"One edition of the World Championships means for us $10 million in revenues," said one sports federation official, speaking on condition of anonymity.

"If this income is postponed, totally or partially, for a year, we will face major problems, especially if the IOC money, originally expected in September, is not paid out."

The Singapore-based International Table Tennis Federation (ITTF) has already taken steps, with "the executive committee agreeing to reduce their expenses and senior staff offering to take a salary reduction," said Marketing Director Matt Pound, but he added that further cuts would take place if needed.

The ITTF has suspended all its competitions until June, and that is costly.

"The IOC will eventually pay out its aid, but what weighs most heavily is the uncertainty about whether our competitions will be held and whether our sponsors will be maintained," he said.

The IOC is not prepared to go into details of what it plans.

"It is not possible at this stage to assess the overall impact" of the postponement of the Tokyo Olympics, an official told Agence France-Presse (AFP). "It depends on a number of variables that are currently being studied."

According to an official of one federation, "the IOC will discuss on a case-by-case basis, sport by sport".

Another option is for the federations to ask for a share of the public aid set up to deal with the coronavirus crisis in countries such as Switzerland, where 22 ASOIF members are based, or the United Kingdom, home of World Sailing.

"Can sports federations benefit from federal aid? The answer is yes, in principle," Philippe Leuba, state councilor of the canton of Vaud, in charge of the economy and sport, told AFP.