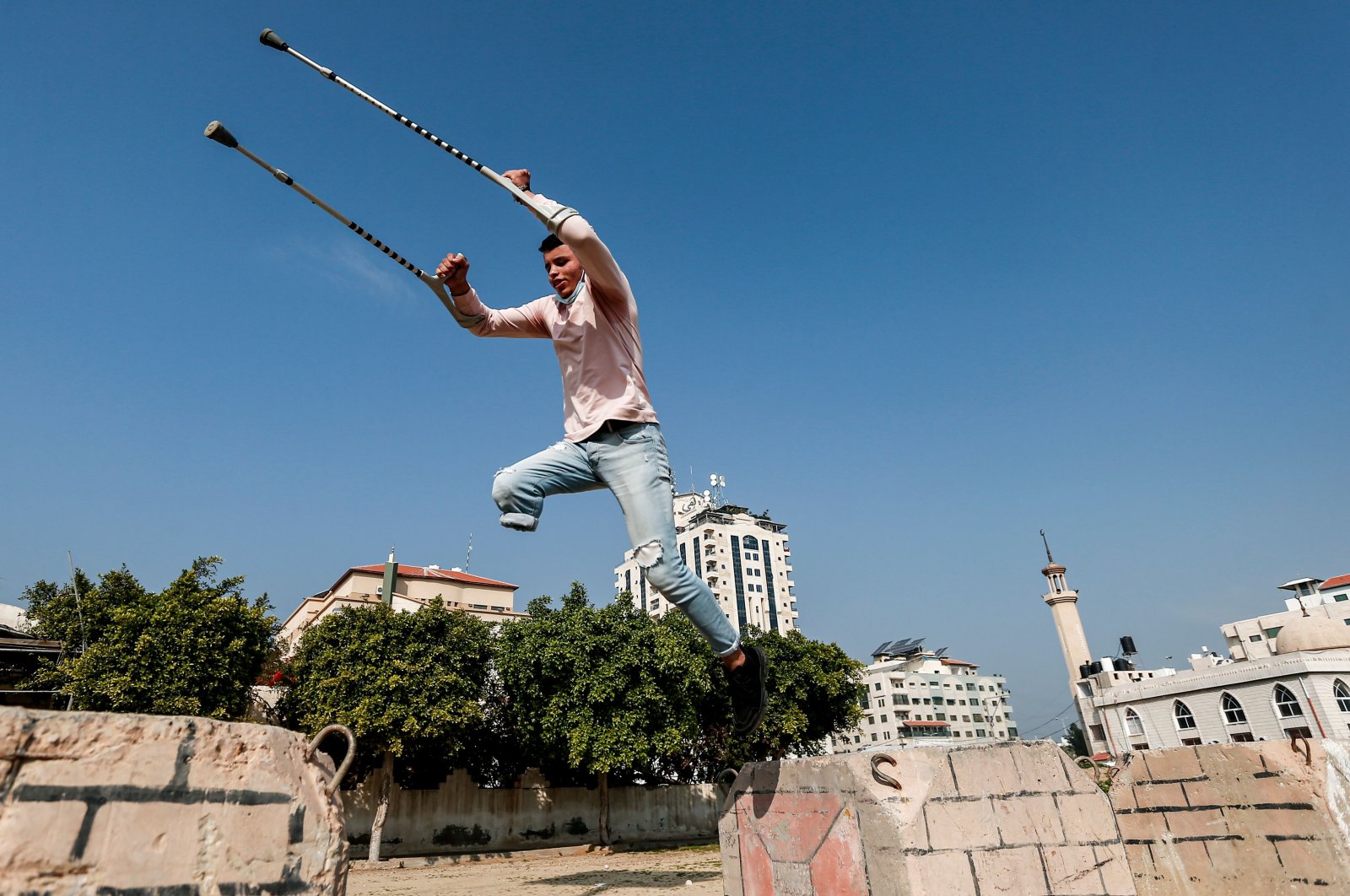 Mohamed Aliwa, a Palestinian youth whose leg was amputated near the knee in 2018 after he was hit by Israeli army fire during protests along the fortified border separating the Gaza Strip from Israel, shows off his parkour skills despite his disability and while on crutches in Gaza City, Jan. 4, 2021. (AFP Photo)
by French Press Agency - AFP Jan 27, 2021 11:09 am
RECOMMENDED

Using crutches, Palestinian Mohamed Aliwa leaps from one concrete slab to another, determined that his missing leg won't stop him from doing parkour, a sport that brings respite from grim reality in Gaza.

The Palestinian teen's right leg was amputated near the knee in 2018 after he was hit by Israeli army fire during protests along the fortified border separating the Gaza Strip from Israel.

Along with his lower leg, he lost his dream of being a professional parkour athlete, he told Agence France-Presse (AFP).

But watching his friends jumping from obstacle to obstacle, the 18-year-old, who now sometimes makes use of a prosthetic limb, decided that his disability shouldn't bring his moves to an end.

"I asked my friends to help me walk, and little by little I came to move and jump almost like them," he said, talking in a rehabilitation center which he visits at least once a week.

Parkour, an extreme sport also known as free-running, originated in France in the 1990s.

"Sometimes I feel frustrated," says Aliwa. "But I told myself that if I could do that (again), then everything else in my life would be easy."

He says the sport gives him "incredible energy."

In Gaza, young people have been practicing parkour for years; bounding from ruin to ruin in an enclave pockmarked by three wars between Israel and the resistance movement Hamas, which has ruled Gaza since 2007.

But even the easiest jump carries risks, and that is why Jihad Abu Sultan, 32, opened what he says is the "first parkour academy in the Palestinian territories," with the support of a French sporting goods brand.

"I started doing parkour in 2005," he said at his club in al-Shati refugee camp, near Gaza City.

"At the time, we didn't have a dedicated space; we trained in cemeteries and on the ruins of buildings destroyed by Israel."

Abu Sultan says that individuals practiced the sport on an ad hoc basis until two months ago when he came together with fellow enthusiasts to establish the club, which they call "Wallrunners."

It teaches the sport "in a safe way, far from the dangers of the street," he told AFP.

It has a modest budget but already has some 70 members, including seven girls, who can jump from one wooden block to another, perform somersaults and swing on parallel bars.

On the ground are rubber mats, to soften falls.

The Gaza Strip has been under Israeli blockade for more than a decade and unemployment is about 50%, rising to 65% among young people, according to the World Bank.

For some, Parkour shines a ray of light into what is a dreary existence.

"For a generation of young Palestinians who have grown up in a flood of under-employment, it has become a method of self-expression, an escape, and a way of life," says the Wallrunners website in English.

"Parkour is young, dynamic, and subversive. A sport that is perhaps custom fit for places like Gaza, and the energy, creativity and resilience of its youth."

The club is due to hold the first parkour competition in Gaza in February if restrictions linked to the novel coronavirus pandemic allow it.

Aliwa will not be able to compete but will watch his fellow athletes.

"I wish I had my leg back, to resume a normal life, to work out in the gym and do parkour" to the limits that he achieved previously, he said.