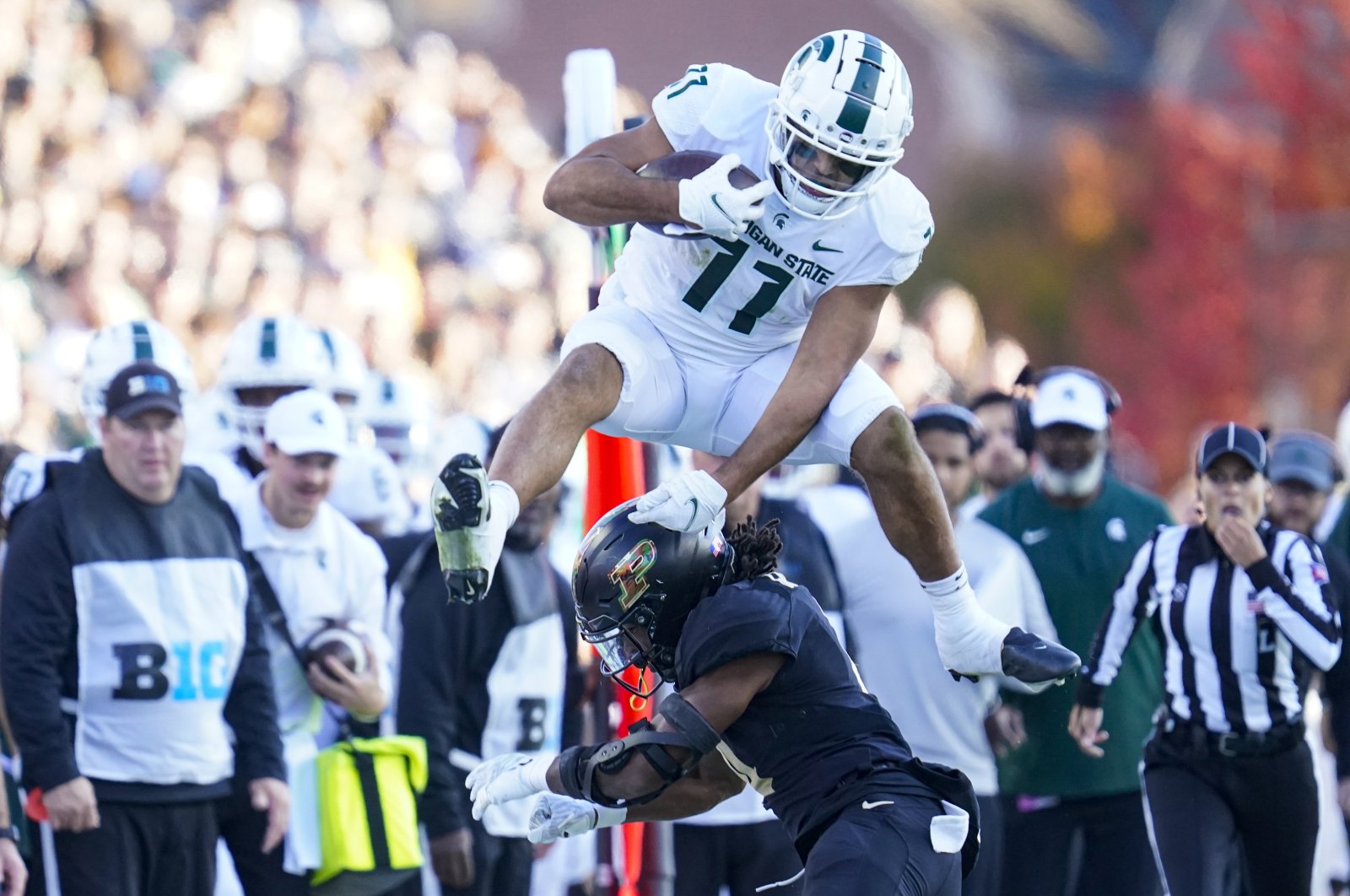 If quality wins over top-5 teams were the sole factor in determining eligibility for the Colege Football Playoff (CFP), then the Purdue Boilermakers – or perhaps more appropriately, "Spoilermakers" – would be a lock for a January bowl date.

Purdue coach Jeff Brohm already had a reputation for running trick plays – and for leading his unranked team to upsets of highly ranked opponents.

His Boilermakers added to that legacy on Saturday.

Aidan O'Connell matched his career high by throwing three touchdown passes – including one on a reverse, flea-flicker screen pass to Jackson Anthrop – and Purdue toppled a Big Ten giant for the second time this season, beating No. 5 Michigan State 40-29 and leaving the conference without an unbeaten team.

“We run a multitude of trick plays, you guys have seen that," Brohm said. “This is one we do, kind of double reverse stuff, you know, throw it behind the line of scrimmage. To be honest with you, I stole it from a YouTube video of a high school team years ago and the first time we ran it, it went for a touchdown."

For Brohm, exotic gadget plays have been a regular feature even before he arrived on Purdue's campus. In fact, his innovative play-calling was one reason the Boilermakers hired him from Western Kentucky after the 2016 season.

This time, the beautifully executed gimmick – O'Connell handed off to Anthrop on an end-around, who gave it to receiver Milton Wright on a reverse, who pitched it back to O'Connell, who tossed a screen to Anthrop – resulted in a 39-yard touchdown that set the stage for something bigger.

The score put the Boilermakers ahead 21-7, and Purdue went on to control most of the game against the previously unbeaten Spartans (8-1, 5-1 Big Ten, No. 3 CFP).

Purdue (6-3, 4-2), pulled off its second top-five upset in four weeks, became bowl-eligible for the first time in three years and extended its FBS record for wins by an unranked team over a top-five foe to 17 – three of them under Brohm.

This time, Anthrop, O'Connell and record-breaking receiver David Bell savored the celebration as the lights flashed, the band played and thousands of fans rushed the field.

“It was just a great day for us," Brohm said.

The Spartans' first loss to Purdue since 2006 could have implications across college football. They fell one game behind No. 6 Ohio State in the Big Ten East Division. No. 2 Cincinnati could be a beneficiary, ascending in the esteem of the College Football Playoff selection committee. And the Big Ten could miss the playoff entirely for the third time in five years.

Michigan State stumbled despite another strong showing by Kenneth Walker III – 23 carries for 146 yards and one score. And the Spartans had plenty of problems defending O'Connell, trickery aside.

“We have to look at the film, make the corrections on the things we didn’t do well and we have to own it,” Michigan State coach Mel Tucker said. “We weren’t able to move the chains and convert when we needed it.”

O'Connell was 40 of 54 for a career-high 536 yards while matching his career best in TD passes. David Bell caught 11 passes for 217 yards and one TD, his 15th career 100-yard receiving game – the most of any Purdue player. John Standeford had 14.

Michigan State tied the score at 21 when Spartans quarterback Payton Thorne scored on a 39-yard run early in the third quarter. But King Doerue broke the tie with a 1-yard TD run on the ensuing series and the Boilermakers added three field goals before Thorne's second TD pass to Tre Mosley and a 2-point conversion cut the deficit to 37-29.

Purdue sealed the win with a 22-yard field goal with 41 seconds left.

Purdue: Brohm pulled off a rare feat by beating two top-five teams in the same season. The last time the Boilermakers did that was in 1960, when they topped Ohio State and Minnesota. With three games left, they are tied atop the West Division with Wisconsin and Minnesota.

Michigan State: The Spartans will slide behind Ohio State in the AP Top 25. How far they fall in the CFP standings will help determine whether a one-loss Michigan State could get back into the playoff picture.

Purdue: The Boilermakers should return to the Top 25. Until beating Iowa on Oct. 16, Purdue had not been ranked since 2007.

Purdue: Faces its second straight top-10 foe when it visits No. 6 Ohio State next Saturday.