Australia scrambles for Djokovic ban defense ahead of court battle 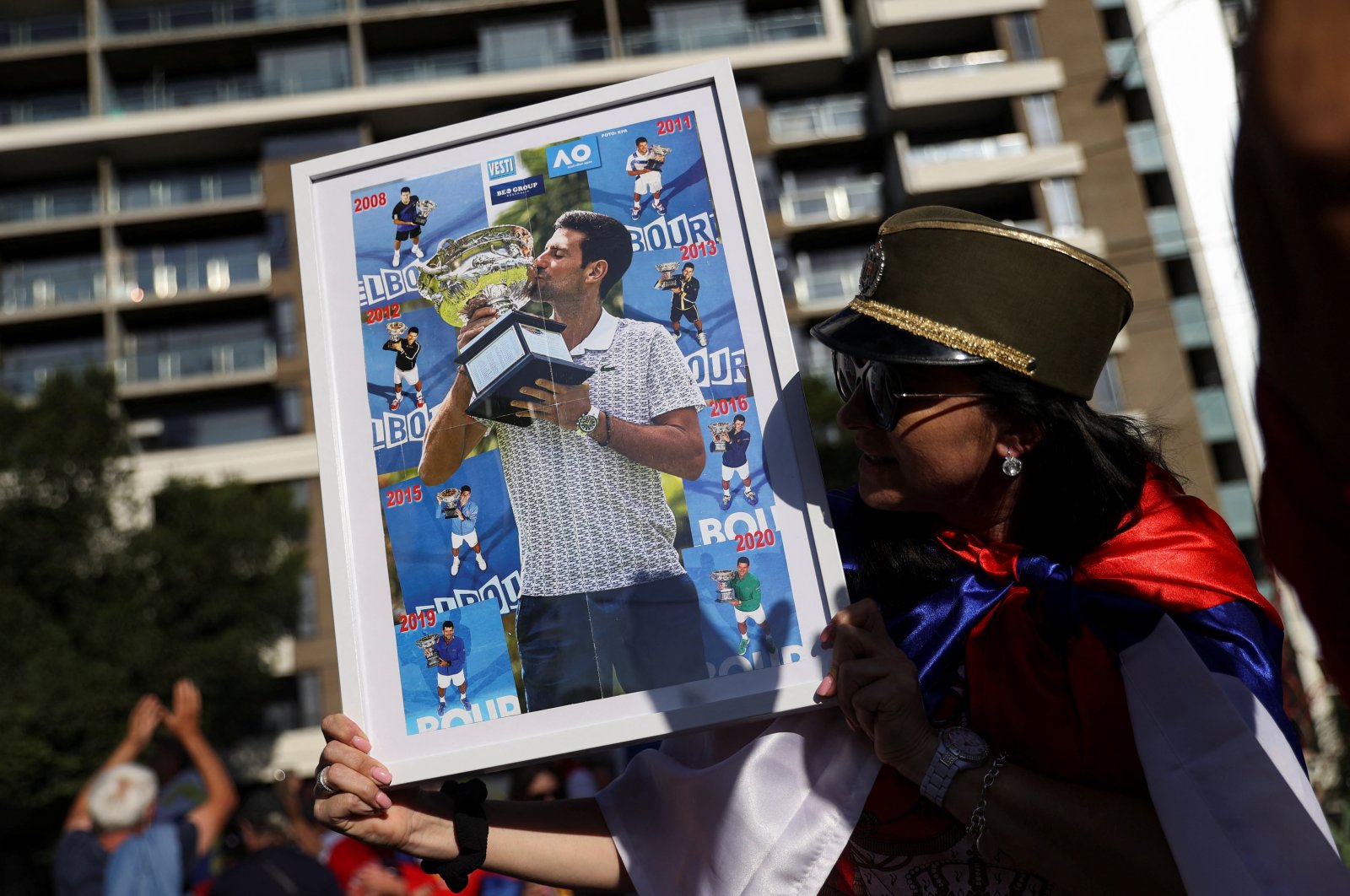 A supporter of Serbian tennis player Novak Djokovic holds his photo during a rally outside the Park Hotel, where the star athlete is believed to be held, Melbourne, Australia, Jan. 9, 2022. (Reuters Photo)
by REUTERS Jan 09, 2022 1:38 pm

As Djokovic fights deportation, the drama in Melbourne has rocked world tennis, caused tensions between Serbia and Australia, and become a flashpoint for opponents of vaccine mandates around the world

The Australian authorities rushed Sunday to submit a legal defense of their decision to bar world No. 1 Novak Djokovic from entering the country over his COVID-19 vaccination status, ahead of a court hearing Monday.

Djokovic was hoping to win his 21st Grand Slam at the Australian Open, starting next week, but instead of training, the Serbian star spent his fourth day in immigration detention, at a hotel used to accommodate asylum seekers.

He is challenging the decision to cancel his visa after being stopped on arrival at Melbourne Airport early Thursday.

A vocal opponent of vaccine mandates, Djokovic had declined to reveal his vaccination status or reason for seeking a medical exemption from Australia's vaccine rules. He broke his silence on Saturday with a legal challenge saying he had been granted an exemption due to contracting – and recovering from – the virus in December.

The Melbourne drama has rocked world tennis, caused tensions between Serbia and Australia, and become a flashpoint for opponents of vaccine mandates around the world.

Australia says its health department notified tournament organizing body Tennis Australia in November that a recent COVID-19 infection was not necessarily grounds for exemption in the country, as it is elsewhere.

Djokovic's lawsuit says the Department of Home Affairs wrote to him this month to say he had satisfied the requirements to enter the country.

Tennis Australia CEO Craig Tiley said in his first media interview since the furor began that his organization had spoken with federal and state officials for months to ensure the safe passage of players.

"Primarily because there is (so) much contradictory information the whole time, every single week we were talking to Home Affairs, we were talking to all parts of government to ensure that ... we were doing the right thing and (following) the right process with these exemptions," Tiley told Channel Nine television.

Home Affairs, which was due to file its defense on Sunday, requested a delay of the matter's hearing from Monday to Wednesday, a court representative told Reuters. The application was rejected, according to a ruling on the federal court's website.

A Home Affairs spokesperson was not immediately available for comment about its legal defense.

Health Minister Greg Hunt, asked about the furor at a media conference Sunday, declined to comment since it was before the court but noted that several other people involved in the tournament had their visas revoked.

Finance Minister Simon Birmingham, asked about the matter on Channel 9 television, said without referring directly to Djokovic that "there's a clear difference between visas and entry requirements" and "entry requirements ... sit over and above the visa conditions."

Czech player Renata Voracova, who was detained in the same detention hotel as Djokovic and had her visa revoked after issues with her vaccine exemption, left the country without challenging her status, the Czech Foreign Ministry said.

Djokovic's situation has drawn an unlikely crowd to the modest Melbourne hotel which, until this month, was best known for media reports about asylum seeker occupants claiming they were served food containing maggots.

Anti-vaccine protesters, refugee advocates and Djokovic fans have converged outside the building, which is under police guard.

"We are sorry that he has been detained, but we ask you: Why does it take the presence of a celebrity to bring attention to our plight?" said Bangladeshi refugee Mohammad Joy Miah, who has been at the facility since 2020.

Since the hotel's windows don't open, Miah gave his speech over the phone, which a supporter projected through a megaphone at a protest outside the facility on Sunday.

Home Affairs was not immediately available to respond to Miah's comments.

Serbian Prime Minister Ana Brnabic said Djokovic had been given gluten-free food, tools to exercise and a SIM card to stay in contact with the outside world.

"It's a positive tone from the Australian side. The Serbian government is ready to provide all the guarantees necessary for Novak to be allowed to enter Australia, the Serbian president is also involved," Brnabic said.