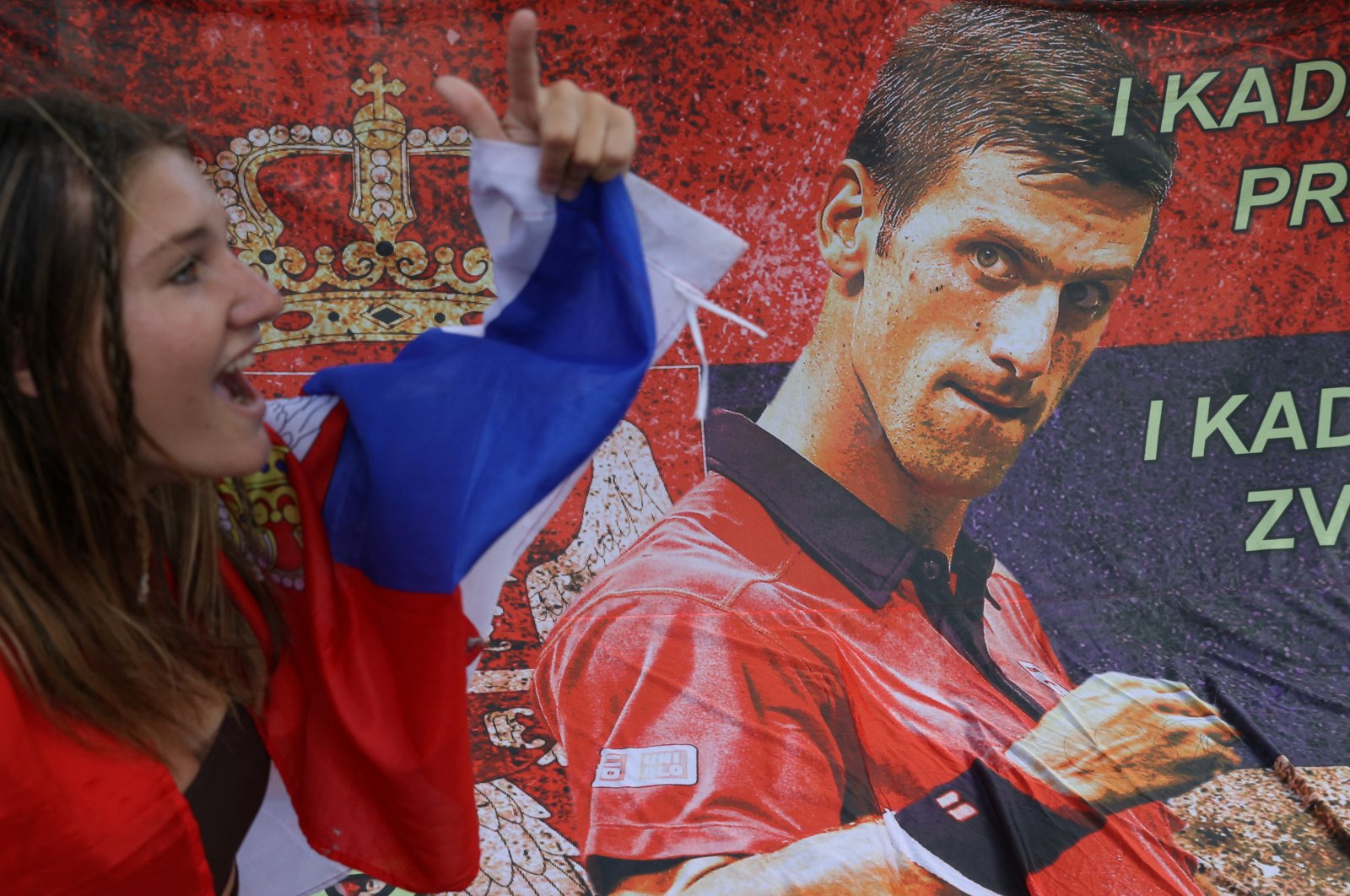 A supporter of Serbian tennis player Novak Djokovic rallies outside the Park Hotel, where the star athlete is believed to be held, Melbourne, Australia, Jan. 7, 2022. (Reuters Photo)
by REUTERS Jan 07, 2022 10:37 am

The Serbian world No. 1 remains at a hotel-turned immigration detention center for asylum seekers, an arrangement that has caused furor back in his home country with President Aleksandar Vucic accusing the Australian government of harassment and persecution

As Novak Djokovic's lawyers continued to fight deportation from Australia, the Serbian world No. 1 spent Orthodox Christmas in Australian immigration detention on Friday.

As the row escalated, officials said two other players who entered the country under the same exemption granted to Djokovic were under investigation.

Border officials detained Djokovic at Melbourne's airport when he arrived Wednesday evening and revoked the visa he had been granted on the basis of a medical exemption from Australia's strict COVID-19 vaccination requirements.

The initial decision to grant entry to Djokovic was met with outrage in Australia, a country with an adult vaccination rate of more than 90% that is battling its worst surge in infections since the pandemic began.

The Australian government pushed back Friday against suggestions by Serbian supporters, including Djokovic's family, that the star player was effectively a prisoner, stressing he is free to leave the country at any time.

"Mr. Djokovic is not being held captive in Australia, he is free to leave at any time that he chooses to do so and Border Force will actually facilitate that," Home Affairs Minister Karen Andrews told reporters.

Djokovic's lawyers successfully scrambled for urgent legal approval for him to remain in the country until a full court hearing in his case against the federal government on Monday.

The public hearing is expected to reveal more details about the exemption granted to Djokovic and the documentation he provided to immigration officials at the border to support it.

The 34-year-old has not revealed the grounds for the exemption and has consistently refused to disclose his vaccination status, while publicly criticizing mandatory vaccines.

As he was confined for a second day to his room in the modest Park Hotel, where several Afghan immigration detainees have been held for months, Djokovic's plight was met with a mixed response from his rivals in elite tennis.

"It is one that threatens what remains of his career and his chance to cement himself as the greatest player of all time," Becker wrote in an opinion piece in The Daily Mail newspaper.

Spanish champion Rafael Nadal told reporters in Melbourne he felt sorry for his rival "but at the same time, he knew the conditions since a lot of months ago."

"Novak, stay strong, buddy," Sandgren told Reuters. "Hope you get out of there soon."

Australia's Nick Kyrgios, one of Djokovic's fiercest critics, said he believed in vaccination "but how we are handling Novak's situation is bad, really bad."

Djokovic's wife, Jelena, posted a photo on Instagram of the couple embracing on a beach to mark Orthodox Christmas on Friday, saying "the only law that we should all respect across every single border is love and respect for another human being."

His family held an emotional news conference at his restaurant in Belgrade on Thursday before protesting in front of parliament, with his father Srdjan saying "they are stomping all over Novak to stomp all over Serbia."

Some critics say Prime Minister Scott Morrison is using the issue to boost his pandemic-fighting credentials with an election looming in coming months amid record daily infections, claims the government denies.

Djokovic will get his day in a court Monday, when a judge attempts to unravel the complexities of Australia's federal system, under which states and territories can issue vaccine exemptions, but the federal government controls international borders and can veto those exemptions.

Djokovic had received permission to enter Victoria without a vaccination from the state government, which does not have the authority to issue visas to international visitors. While the reason for his medical exemption was not officially released, The Age newspaper reported it was because he had contracted COVID-19 in the past six months.

Vaccines are not mandatory in Australia, but they are required for a range of activities.

Morrison said Tennis Australia had been advised weeks ago that a recent infection did not meet the criteria for exemption, even though a government task force that provides guidance on such matters had recommended that an infection in the past six months should be sufficient to qualify.

Tennis Australia and Victoria government officials said Djokovic had received no preferential treatment, adding that he was among "a handful" of approvals for exemptions in an anonymous and independent assessment of 26 applications.

With the tournament kicking off on Jan. 17, Andrews confirmed Australian Border Force was assessing the credentials of two others who entered the country under the same exemption granted to Djokovic.

A source familiar with the matter told Reuters there was a third participant and exemptions may have been granted to other players or officials who are yet to arrive in Australia.

Tennis Australia has not commented on the matter since Djokovic was detained.