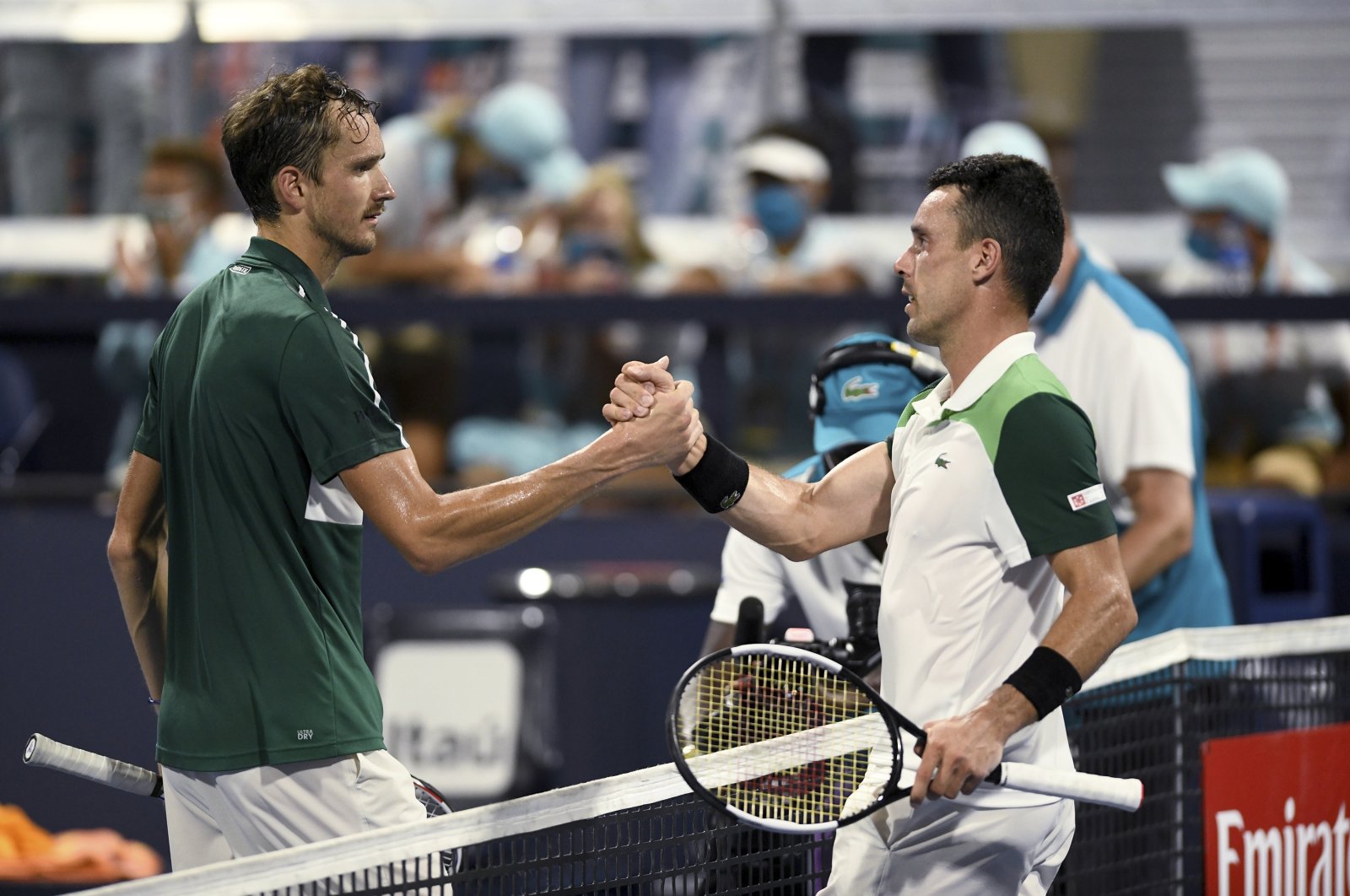 Top-seeded Daniil Medvedev crashed out of the Miami Open Wednesday on a day of upsets that also saw Australian Open champion Naomi Osaka ousted from the quarterfinals.

Seventh-seeded Spaniard Roberto Bautista Agut beat Medvedev 6-4, 6-2, for his third win in as many meetings with the Russian who was runner-up to Novak Djokovic at the Australian Open and ascended to No. 2 in the world with his victory at Marseille in March.

Women's world No. 2 Osaka – seeded second behind top-ranked Ashleigh Barty in the prestigious ATP Masters and WTA hardcourt tournament – had bowed out hours earlier, the Japanese star's 23-match winning streak coming to a crashing halt with a 6-0, 6-4 loss to Greece's Maria Sakkari.

Sakkari will face eighth-seeded Canadian Bianca Andreescu for a place in the women's final.

Osaka, playing her first tournament since lifting her fourth Grand Slam title at the Australian Open, won just eight points in the first set as she failed to muster a single winner.

Osaka broke in the second game of the second set and seized a 3-0 lead before Sakkari roared back for a victory that ended Osaka's chance of overtaking Australia's Barty – who had already booked her semifinal spot – atop the world rankings this week.

Osaka acknowledged that the rankings race may have affected her against Greece's 25th-ranked Sakkari.

"The last time I was in this (press conference) seat, I wasn't really thinking at all about rankings, but someone asked me that question, so then I did start to ponder about it a lot.

"So maybe unwillingly that put pressure on myself. But I feel like even if it did, I should be able to rise above that," Osaka said.

Osaka hadn't dropped a set at love since her last defeat, which came in February 2020 in a Fed Cup match.

"She has the most wins so far this year so she's in great form – it meant a lot to me," said Sakkari, who let loose a scream of delight after the final point.

"To be deadly honest, I got a little tight in the first two games of the second set," said Sakkari, who had saved six match points in her fourth-round win over American Jessica Pegula.

"I stayed within myself and started fighting back, hitting a few more balls and winning a few points against her."

Andreescu, the 2019 U.S. Open champion trying to work her way back this year after a 15-month injury absence, broke Sorribes in the final game of the opening set, launching a run of eight straight service breaks.

Andreescu was irked by a time violation early in the second set, in which Sorribes held serve for the only time in the set for a 5-3 lead – enough of an edge to level the match.

Up a break at 3-2 in the third, Andreescu saved three break points to hold, broke Sorribes again only to drop her own serve but finally sealed it with a stinging backhand down the line on her second match point.

"She's an incredible fighter," Andreescu said. "I have no idea how I pushed through, but I fought as hard as I could and I'm super happy."

Bautista went into his clash with Medvedev with the confidence of two prior victories over the Russian, and once again he had the winning formula.

The Spaniard gained the first break of a tense opening set for a 5-4 lead, then saved a break point to pocket the set on his second opportunity.

He broke Medvedev to open the second set, and the Russian never found a way back in, unable to convert two break points before dropping his serve again to trail 4-1.

Bautista served out the match in a no-nonsense style, with a love game after one hour and 32 minutes.

Against Sinner, he'll be looking to avenge a three-set defeat in the third round at Dubai.

Sinner handled everything Bublik could throw at him on Wednesday – from a 168 kph (105mph) forehand return to an underhand serve.

In the end the Italian's 28 forehand winners were plenty to book a semi-final berth in just his third Masters 1000 appearance.