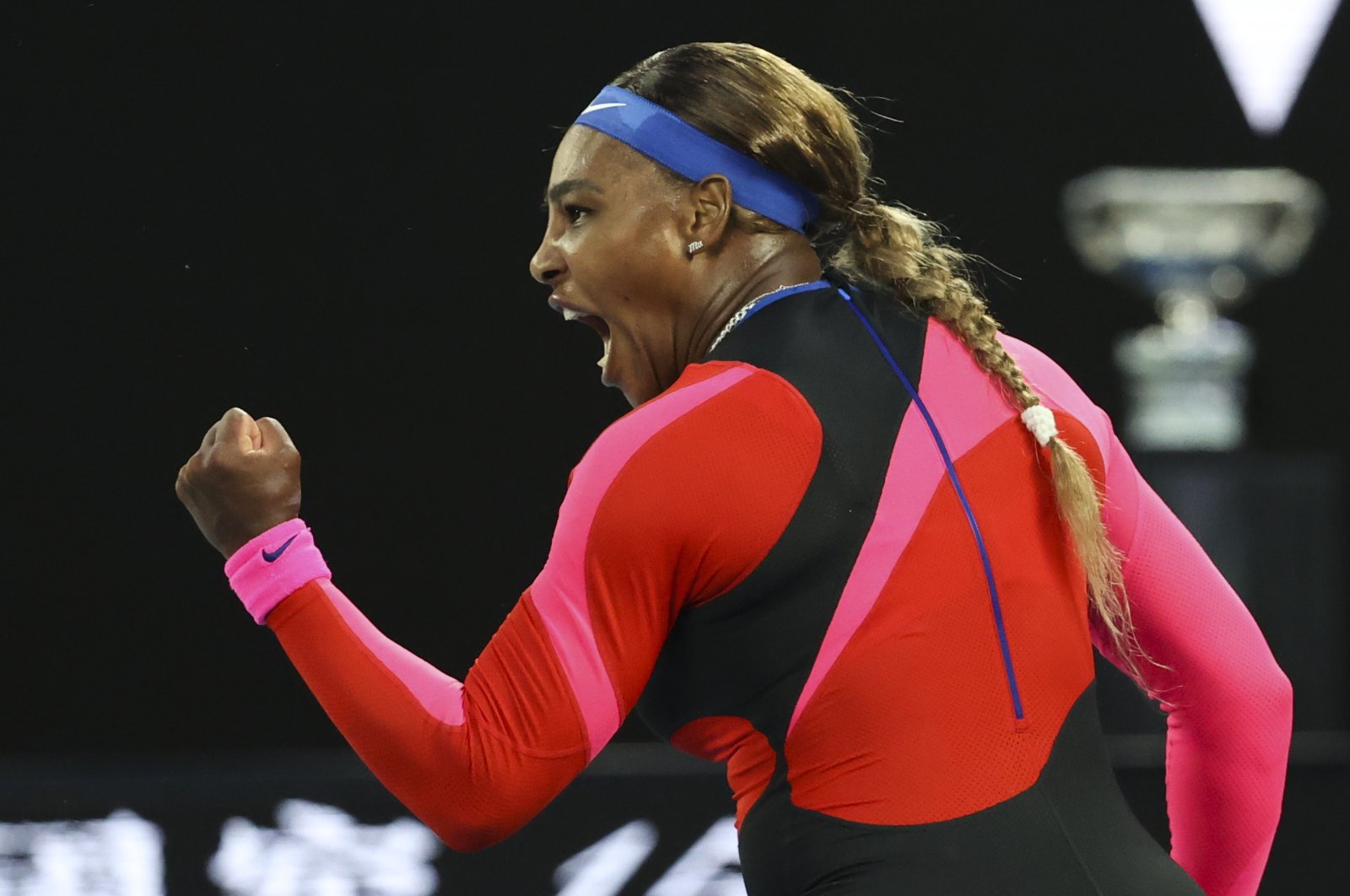 Serena Williams was not pleased with the way her play suddenly was slipping in the Australian Open quarterfinals.

After one mistake against No. 2 seed Simona Halep – who won the last time they played each other – Williams pointed at her racket strings and made a sour face, as if to indicate it wasn’t her fault. After another, Williams looked up at her guest box with palms up and asked, "What is happening?"

That dismay didn't last long. Williams recalibrated her shots with the help of terrific footwork, overcame 33 unforced errors and claimed the last five games, beating Halep 6-3, 6-3 Tuesday to return to the final four at Melbourne Park for the first time since she won the tournament in 2017. That was her most recent Grand Slam title.

"I just realized I was making a lot of unforced errors in those games that I lost. And I knew that I had an opportunity to play better," said Williams, now two wins away from claiming her record-tying 24th major singles championship. "So I was just like, ‘Just stay in there. You just can keep going.’ And that’s what I just did."

She set up a showdown against No. 3 Naomi Osaka, a three-time Slam champ who will carry a 19-match winning streak into Thursday’s semifinals.

"She’s Serena," Osaka said. "I feel really intimidated when I see her on the other side of the court."

This will be their fourth matchup; the most memorable, of course, was Osaka's victory in the 2018 U.S. Open final.

On that night, Williams got into an argument with the chair umpire after her coach, Patrick Mouratoglou, was caught trying to relay a signal – that’s not allowed in Grand Slam play – and wound up being docked a game. Osaka’s win closed with thousands of fans filling Arthur Ashe Stadium with boos, and both of the athletes in tears during the trophy ceremony.

"We both have had closure," Williams said, "and we have reached out to each other."

There were no spectators Tuesday in Rod Laver Arena because they’ve been banned from the tournament during a five-day government lockdown in response to a local rise in COVID-19 cases (the applause and other crowd noise TV viewers hear is added to the broadcast feed and isn’t actually happening in the stadium).

Displaying the improved movement that Mouratoglou says has been a point of emphasis and Williams says is a result of a problematic left Achilles tendon finally healing, the 39-year-old American covered the court impeccably. She stretched points with defense or swung at balls while they were still on the rise, trying to take time away from Halep.

"I know that, throughout my career, speed has been one thing that’s been super good in my game," Williams said.

Plenty was super good in the first set. Serves at up to 124 mph (200 kph). Returns that included a cross-court forehand winner on Halep’s very first service point, a stinging shot about which Williams said with a chuckle: "I just saw it, and it looked like a donut, and I went for it."

Then the miscues started mounting – a double-fault here, a wild volley there – and Williams trailed 2-0, then 3-1 in the second set.

But she put a stop to that slide.

A key moment came at 3-all, when Williams earned her sixth break chance of the game by taking a 21-stroke exchange that ended with a wide forehand from Halep. Williams converted that break on a 13-shot point in which she ran wide of the doubles alley for a forehand that extended things until Halep dumped a forehand into the net.

"My feeling after this match is that I was not that far," two-time major champ Halep said, "but also: She was stronger in the important moments."

Williams is 0-4 in Grand Slam finals since her last championship. One of those defeats came against Osaka at Flushing Meadows. Another came at Wimbledon in 2019 against Halep, who made an unheard-of total of three unforced errors in a performance she described as "the best day, actually, of my life."

If Williams is going to get No. 24 on Saturday, she could end up needing to have beaten each of the top three players in the rankings: Halep, Osaka and, perhaps in the final, No. 1 Ash Barty, whose quarterfinal against No. 25 Karolina Muchova is Wednesday.

The other remaining quarterfinal is between two Americans, No. 22 Jennifer Brady and unseeded Jessica Pegula.