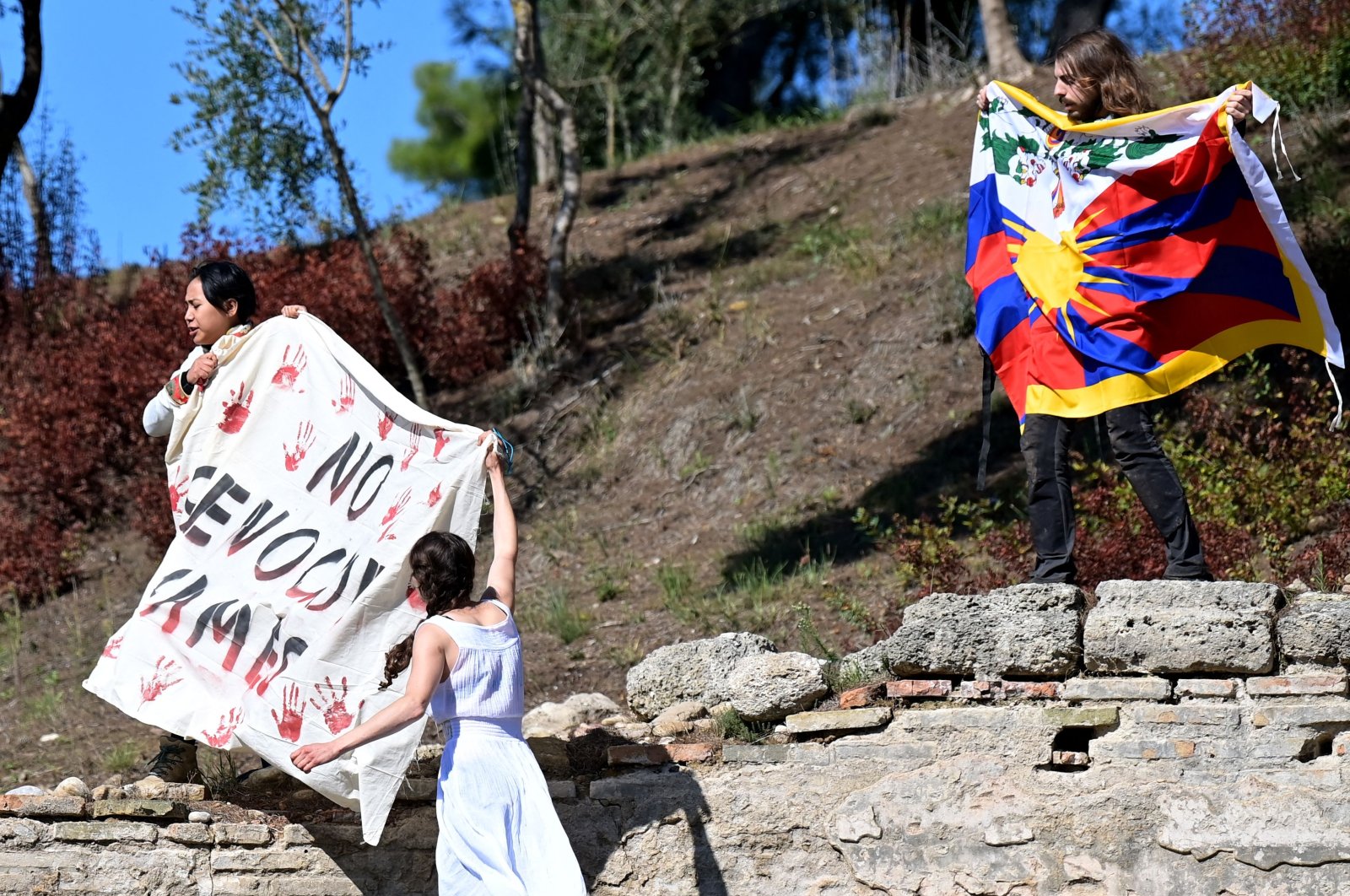 Three protesters unfurl a banner and a Tibetan flag during the flame-lighting ceremony for the Beijing 2022 Winter Olympics at the Ancient Olympia archeological site, birthplace of the ancient Olympics in southern Greece, Oct. 18, 2021. (AFP Photo)
by REUTERS Oct 18, 2021 4:53 pm
RECOMMENDED

Protesters disrupted the torch-lighting ceremony for the Beijing 2022 Winter Olympics in Greece Monday as they called for a boycott over human rights issues.

Two women and a man sneaked past a tight police cordon and entered the archaeological site of the ancient Greek stadium and temple where the Olympic flame is traditionally lit and which had been sealed off for days.

They held up a Tibetan flag seconds after the torch was lit by an actress playing the role of a high priestess at the Temple of Hera a few meters away.

The three protesters shouted for a boycott of the Games in Beijing, as invited officials, including Greek President Katerina Sakellaropoulou and International Olympic Committee (IOC) President Thomas Bach, looked on.

The ceremony itself was not interrupted, as had been the case for the 2008 Beijing Summer Games, and the activists, who did not reach the actual stadium or temple, were quickly led away by police.

Greece's Olympic Committee (HOC), in charge of organizing the event, said it was disappointed the ceremony had been used for political purposes. The IOC, when asked for a comment, referred to the HOC statement.

"The lighting of the Olympic flame represents 3,000 years of Greek history and a commitment to peace and dialogue," the HOC said.

"While the HOC respects individual rights to freedom of expression, it is disappointing that this traditional cultural event has been used by a few individuals for other purposes."

The Chinese capital will become the first city to host both the Winter and Summer Games when it stages the Feb. 4-20 event but protests and calls for boycotts over the country's human rights record have marred the run-up.

Four other activists were detained by police outside the stadium an hour before the ceremony and taken to the local station. They have not been charged. Two more were arrested in Athens on Sunday after protesting at the Acropolis monument.

Activists are planning more protests and a news conference Tuesday when the flame will be officially handed over to Beijing Games organizers in Athens.

"The Olympic Games cannot address all the challenges in our world," Bach said in his address inside the ancient stadium prior to the protest.

"But they set an example for a world where everyone respects the same rules and one another. They inspire us to solve problems in friendship and solidarity."

Rights groups and U.S. lawmakers have called on the International Olympic Committee (IOC) to postpone the Games and relocate the event unless China ends what the United States deems ongoing genocide against Uyghurs and other Muslim minority groups.

Chinese authorities have been accused of facilitating forced labor by detaining around a million Uyghurs and other primarily Muslim minorities in camps since 2016.

It was the second time, after the Beijing 2008 Games, that the torch lighting ceremony was disrupted by protests by human rights activists, who had stormed that ceremony and repeatedly disrupted the international torch relay that followed.

"Under the robust leadership of the Chinese government ... we can and will deliver a streamlined, safe and splendid Olympic Games to the world," Beijing Games Vice President Yu Zaiqing said.