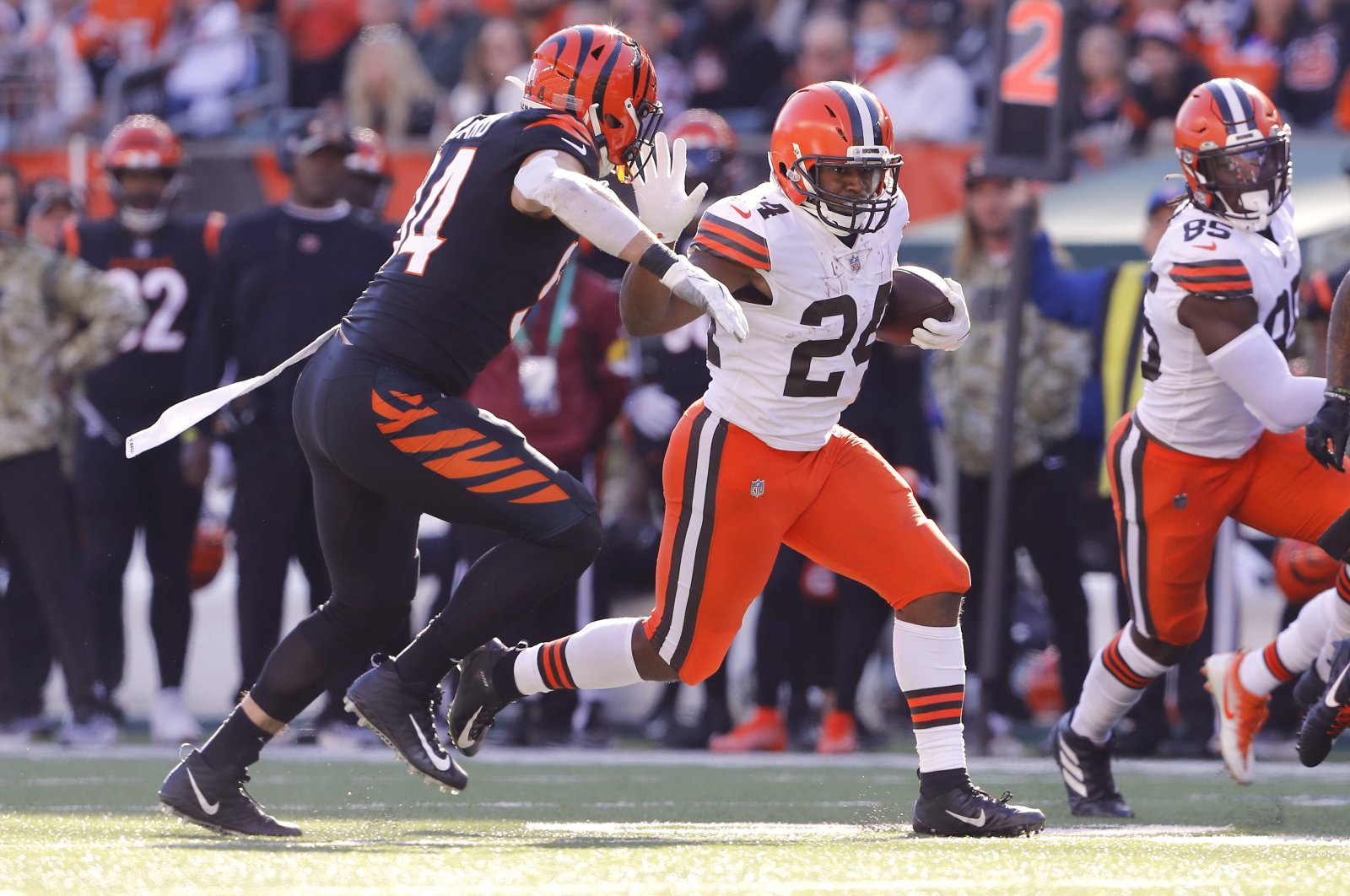 The Cleveland Browns came out on top in the Battle of Ohio, providing for the second week in a row an answer to the age-old question, "Who dey think gonna beat dem Bengals?"

Cleveland (5-4) got by just fine without Odell Beckham Jr., their embattled wide receiver, in sending host Cincinnati (5-4) to its second straight loss.

Nick Chubb rushed for 137 yards and two touchdowns on just 14 carries, and Baker Mayfield finished 14-of-21 passing for 218 yards and two scores for the Browns, who turned three Cincinnati turnovers into 13 points to win for the sixth time in the past seven meetings against their in-state and AFC North rival.

Cleveland's 41 points matched its total from the three previous games combined. The team is expected to waive Beckham on Monday. He did not play Sunday.

Wright's 21-yarder with 12:10 left in the game snapped a 6-6 tie, and the Jacksonville defense did the rest. The Jaguars sacked Josh Allen four times, including Dawuane Smoot's 9-yard sack with 1:11 left that took Buffalo out of field-goal range.

Allen's 4th-and-16 pass for Stefon Diggs with 1:02 remaining fell short, and Jacksonville (2-6) ran out the clock for the biggest win of Urban Meyer's first season as the Jags' head coach.

Allen completed 31 of 47 passes for 264 yards and tossed two interceptions for Buffalo (5-3), which outgained Jacksonville 301-218 but hurt itself all day. The Bills were flagged 12 times for 118 yards, drawing five 15-yard penalties.

Matt Ryan threw two touchdown passes, ran for another score and drove visiting Atlanta to a game-winning field goal as time expired in a victory over New Orleans.

Ryan's 64-yard completion to Cordarrelle Patterson set up Younghoe Koo's winning 29-yard field goal. The Falcons escaped after Trevor Siemian had rallied the Saints (5-3) from an 18-point fourth-quarter deficit to a one-point lead on an 8-yard touchdown pass to Kenny Stills with 1:01 left.

Ryan completed 23 of 30 for 343 yards and connected with Olamide Zaccheaus on both scoring passes for the Falcons (4-4).

Teddy Bridgewater threw for a touchdown and rushed for another to lift visiting Denver over Dallas.

Bridgewater completed 19 of 28 passes for 249 yards, Tim Patrick finished with four catches for 85 yards and Jerry Jeudy had six receptions for 69 yards. Melvin Gordon rushed for a touchdown and rookie Javonte Williams added a season-high 111 yards on the ground to send the Broncos (5-4) to their second straight win.

Dallas' Dak Prescott completed 19 of 39 passes for 232 yards with two touchdowns and an interception in his return from a one-game absence due to a calf injury. Prescott connected on 5- and 4-yard touchdown passes to Malik Turner late in the fourth quarter for the Cowboys (6-2), who saw their six-game winning streak come to a halt.

The loss of quarterback Aaron Rodgers after he tested positive for COVID-19 proved costly for the Packers (7-2), who lacked offensive consistency and had their seven-game winning streak snapped. Jordan Love, making his first NFL start, passed for 190 yards, going 19 of 34, though the Packers went only 2-for-12 on third-down plays.

New England did much of its good work on defense against Carolina, with J.C. Jackson scoring on an 88-yard interception return in the Patriots' victory in Charlotte, N.C.

Carolina (4-5) has lost five of its past six games. In the past three games, the Panthers have a total of one touchdown.

Without Saquon Barkley, the New York Giants (3-6) leaned on running back Devontae Booker and a stingy defense to grind out a victory against Las Vegas (5-3) at East Rutherford, New Jersey.

Barkley did not play due to a lingering ankle injury. Booker finished with a career-high 99 rushing yards on 21 carries as the Giants finished with 149 rushing yards as a team. Quarterback Daniel Jones was 15 of 20 for 110 passing yards with a touchdown pass and no interceptions.

Raiders quarterback Derek Carr was 30 of 46 for 296 yards with a touchdown and two interceptions by New York cornerback Xavier McKinney, including one returned for a score.

Backup quarterback Jacoby Brissett, who hadn't won a game since 2019, helped Miami snap a seven-game losing streak at the expense of visiting Houston.

Miami (2-7) turned the ball over five times but still managed its first home win in five tries. Brissett completed 26 of 43 passes for 244 yards, one touchdown and two interceptions. Miami also lost three fumbles, including one by Brissett.

The Texans' Tyrod Taylor was intercepted three times as Houston (1-8) extended the longest active losing streak in the AFC to eight games.

The Vikings' Anthony Barr deflected and intercepted Lamar Jackson's pass at the Minnesota 38 on the opening drive of overtime, but the Vikings (3-5) went three and out.

Jackson passed for 266 yards, three touchdowns and two interceptions for the Ravens (6-2) and ran for 120 yards on 21 carries. It was Jackson's 10th 100-yard rushing game, tying the NFL record set by Michael Vick. Kirk Cousins completed 17 of 28 passes for 187 yards and two touchdowns for the Vikings, while Dalvin Cook ran for 110 yards on 17 carries.

James Conner ran for 96 yards and two scores and had five receptions for 77 yards and another touchdown, and Arizona (8-1) beat San Francisco (3-5) in Santa Clara, California.

For Arizona, Colt McCoy was 22-of-26 passing for 249 yards and a touchdown in place of the injured Kyler Murray, and Eno Benjamin ran for a score.

In addition to Murray being sidelined with an ankle injury, the Cardinals played without wide receivers DeAndre Hopkins (hamstring) and A.J. Green (COVID-19).

Justin Herbert threw for 356 yards and two touchdowns and rushed for Los Angeles' other touchdown. Keenan Allen caught 12 passes for 104 yards, while Austin Ekeler rushed for 59 yards and also caught three passes for the Chargers (5-3).

In its first game without star running back Derrick Henry, Tennessee used its defense to control Los Angeles in an impressive win.

Tennessee (7-2) won its fifth straight game despite gaining just 194 total yards. But its defense sacked Matthew Stafford five times (Jeffery Simmons getting three of them) and intercepted him on consecutive passes early in the second quarter to turn the game around.

With the Rams up 3-0, Stafford flung the ball out of the end zone while in Simmons' grasp and David Long picked it off and returned to the 2. Ryan Tannehill hit Geoff Swaim on the next play with 12:21 remaining for a 7-3 lead. On the next play from scrimmage, Kevin Byard picked off Stafford and returned the ball 24 yards for a score and a 14-3 Titans lead.