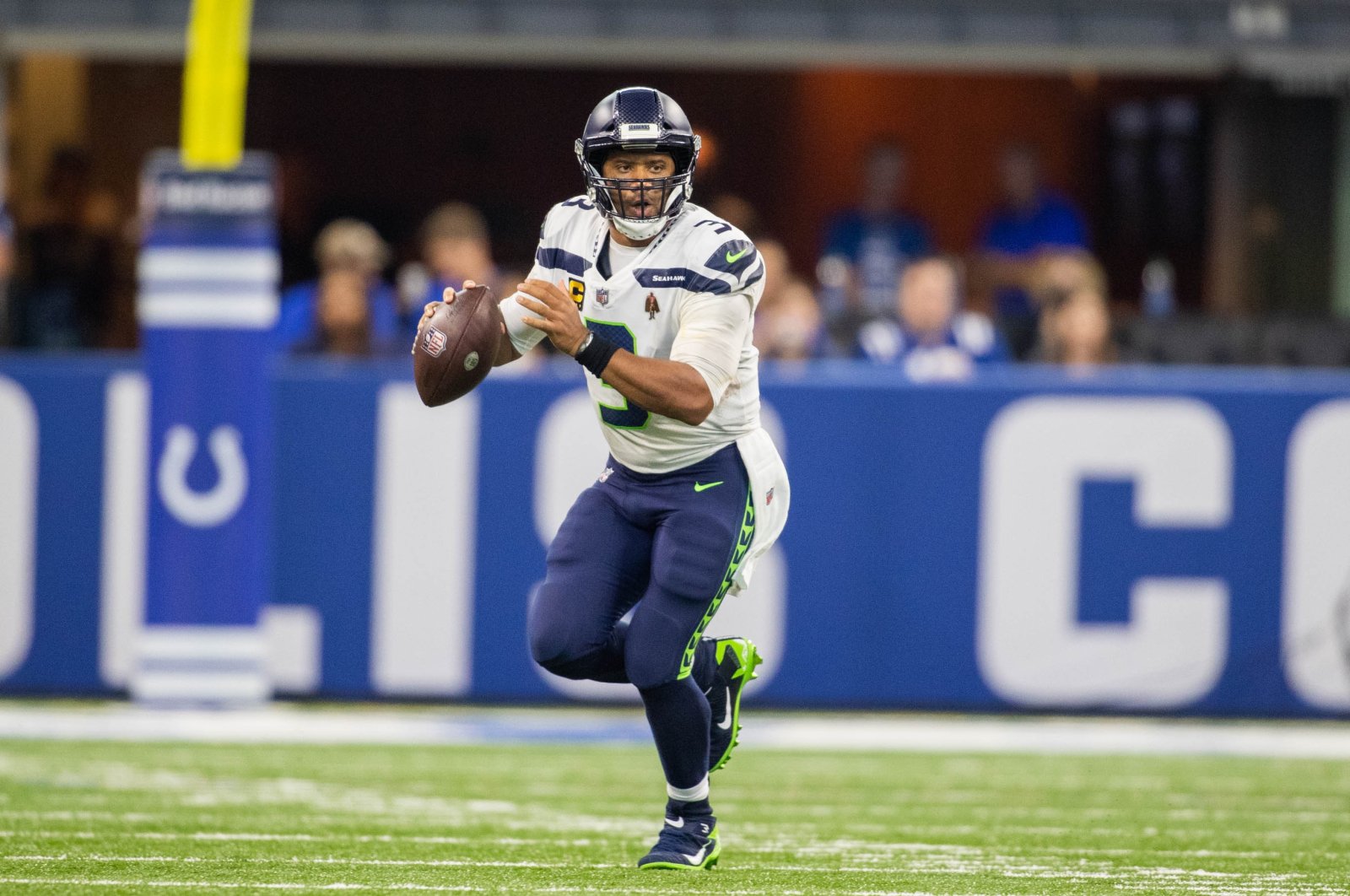 Russell Wilson chasing his 100th regular-season victory, the Bengals going up against their former quarterback now taking snaps for the Bears, and Green Bay hoping to recover from last week's debacle where they nearly laid a goose egg are just some of the storylines to watch in the rest of this week's NFL action.

After carving up the Colts’ secondary in the opener, Russell Wilson will no doubt be ready to lead his Seahawks against the Titans on Sunday as the “12s” return to the stands for the first time since Dec. 29, 2019, because of the COVID-19 pandemic.

The defending AFC South champion Titans are looking to avoid a 0-2 start following a poor effort at home in a 38-13 loss to Arizona last week.

Ryan Tannehill was sacked six times, Derrick Henry averaged only 3.4 yards per carry and the defense gave up 416 yards.

“We know last week wasn’t our standard,” said Henry, who led the NFL with 2,027 yards and 17 touchdowns in 2020. “We just need to come out here and focus on being better, being locked in on what we have to do, play by play, and each rep. That is all we need to do. Guys are hungry to be better and just trying to put it together this week.

“We want to play to our standard, play to our identity, and we know it starts out here each and every day. Each and every rep, just locking in, working hard, focusing on what you have to do so you can go out there and play at a high level on Sunday.”

Week 2 kicked off Thursday night with Washington (1-1) edging the Giants 30-29 on Dustin Hopkins' 43-yard field goal on the final play – after an initial miss was negated by New York going offside. Graham Gano made five field goals for the Giants (0-2).

Carson Wentz’s debut with the Colts looked more like the way he finished last season in Philadelphia, as he was constantly hit, hurried and harassed during a 28-16 loss to Seattle. It won’t get much easier facing Aaron Donald and the stingy Rams with an undermanned offensive line. Two-time Pro Bowl left tackle Eric Fisher’s status is uncertain, and right tackle Braden Smith is dealing with a foot injury.

Meanwhile, Matthew Stafford’s debut with the Rams couldn’t have been any better. He passed for 321 yards and three touchdowns with a career-high 156.1 rating in a 34-14 win over Chicago. The Rams aim to win a road opener for the fifth straight year under coach Sean McVay.

Patrick Mahomes and Lamar Jackson face off for the fourth straight season in a matchup of MVP quarterbacks. Jackson is 0-3 vs. Mahomes, 30-5 against everyone else.

“It’s not about me and Mahomes,” Jackson said. “Not to me. Probably to everyone else. But it’s the Ravens vs. the Kansas City Chiefs.”

He’s right, and the injury-depleted Ravens need a win after blowing a 14-0 lead Monday night against the Raiders.

Mahomes rallied the Chiefs to a win over Cleveland and still hasn’t lost in September. He’s 11-0 with 35 TDs and zero interceptions in the opening month.

The Saints began the post-Drew Brees era with a resounding win over Aaron Rodgers and the Packers thanks to an efficient performance from Jameis Winston and a dominant defensive effort.

Carolina’s Sam Darnold led his new team to a win over his old team last week, but he’ll face a tougher test against the Saints than the Jets presented. Expect Christian McCaffrey to continue to get a heavy workload after totaling 187 yards on 30 touches in his first game back from an injury-riddled 2020 season.

Andy Dalton makes his first home start with the Bears and most fans hope it’ll be his last. Nearly all of Chicago wants to see first-round draft pick Justin Fields, who played well in a brief appearance in the opener.

The Bengals got Joe Burrow back and he got them back in the win column. He had help from his college teammate Ja’Marr Chase, who had five catches for 101 yards and one TD in the overtime win over Minnesota. Joe Mixon, also back from injury, ran for 127 yards.

A popular pick to upend Kansas City in the AFC, the Browns wasted a 12-point halftime lead and lost a playoff rematch to the Chiefs. The Texans should help them avoid a 0-2 start.

Despite routing Jacksonville and spoiling Urban Meyer’s NFL coaching debut, the Texans are still expected to be one of the worst teams in the league.

Baker Mayfield won’t have Odell Beckham Jr. but threw for 321 yards without him, and he can turn to the backfield duo of Nick Chubb and Kareem Hunt anytime.

No. 1 overall pick Trevor Lawrence looks to improve on a so-so start. Meyer wants him to improvise more. It would help if Jacksonville didn’t fall behind by a few scores early and could rely more on James Robinson’s running and a more balanced attack.

The Bills, an even more popular pick than the Browns to overtake the Chiefs in the AFC, started out flat, losing at home to Pittsburgh. MVP runner-up Josh Allen got sacked three times and completed just 59% of his passes.

The good news for Buffalo is facing an opponent it has dominated recently, winning five straight. The Dolphins are 0-2 in home openers under coach Brian Flores. Tua Tagovailoa was efficient in a win at New England last week. He’ll need to do more to beat the Bills.

This is the first matchup featuring two of the five 2021 first-round QBs as Mac Jones leads the Patriots against Zach Wilson and the Jets, with both players seeking their first win.

New England has won the last 10 meetings and rookie quarterbacks are 6-21 against Bill Belichick since 2000. Robert Saleh has the home-crowd support as he looks for his first win as Jets coach.

Nick Sirianni’s impressive head coaching debut coupled with Jalen Hurts’ stellar performance in a convincing win at Atlanta made the duo the talk of Philly. The praise won’t last long if they stumble against the 49ers.

Jimmy Garoppolo led San Francisco to a big lead before the Niners had to hold off the Lions in a 41-33 win. Trey Lance threw a TD pass on his first NFL attempt, but Garoppolo can keep the rookie on the sideline by continuing his steady play.

George Kittle had a career-best 15 catches for 183 yards in a loss to the Eagles last October and he should have plenty of opportunities to do more damage.

Fresh off leading the Raiders to an impressive comeback win, Derek Carr and Jon Gruden lead their team across the country on a short week. It’ll be a tough challenge against the Steelers.

A win over another playoff team from the AFC North would be a major step forward for Gruden’s rebuilding project that began in 2018.

Ben Roethlisberger is three TDs away from becoming the eighth quarterback to throw 400 career touchdowns.

Kyler Murray was spectacular in the opener for the Cardinals, who also got an excellent defensive effort led by Chandler Jones with his five sacks. J.J. Watt plays his first home game in Arizona while eight-time Pro Bowl cornerback Patrick Peterson returns to face his former team.

Kirk Cousins and the Vikings had several chances to beat the Bengals but couldn’t do it and now must win on the road to avoid 0-2.

The defending Super Bowl champion Buccaneers needed some magic from Brady and a winning field goal from Ryan Succop to hold off Dallas in the NFL’s kickoff game. Brady has never lost to the Falcons in eight meetings and Tampa is a 12 1/2-point favorite.

Arthur Smith’s head coaching debut was a dud as Matt Ryan and the Falcons were held to two field goals. Look for Ryan to try to exploit Tampa’s injury-depleted secondary.

Dak Prescott picked up where he left off last season before an ankle injury sent him to the sideline. But his outstanding performance against the Bucs wasn’t enough because the Cowboys still are weak defensively.

Justin Herbert threw for 337 yards against Washington’s strong defense, so he could have a career day facing Dallas. The Cowboys are battling more injuries with the possibility that four starters will be out. Defensive end DeMarcus Lawrence headlines that list.

Aaron Rodgers looked more like a guy who spent the offseason contemplating his next move than the reigning MVP in a shocking blowout loss to New Orleans last week.

Facing the Lions should get Rodgers and the Packers back on track. Detroit rallied to turn a 28-point deficit into only an 8-point loss in Dan Campbell’s head coaching debut, but the Lions’ best chance to beat Rodgers would be if the game was being played in Florida, where he is 3-5.