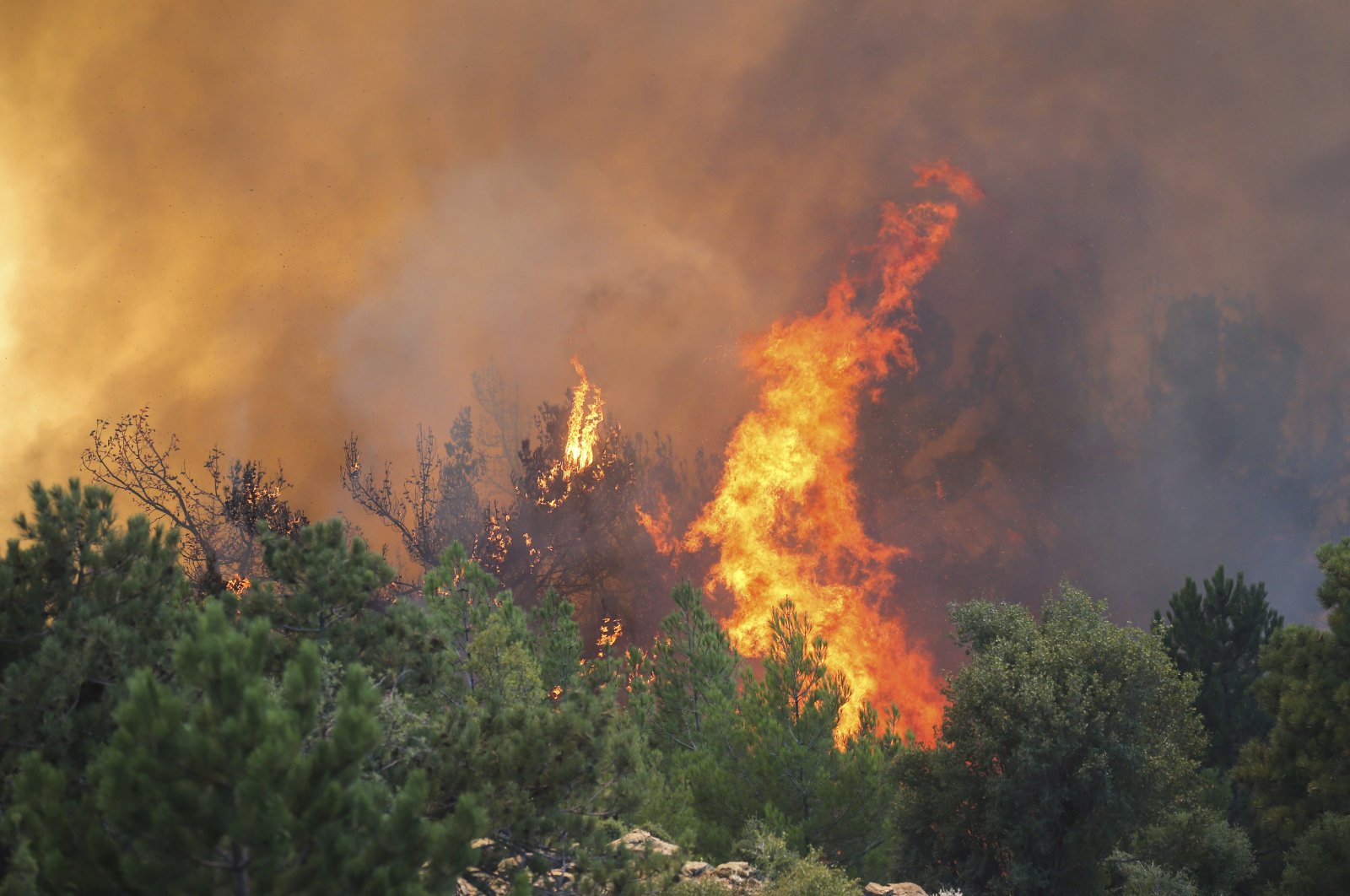 Turkey managed to contain most of the 270 forest fires that took hold in the country’s south in recent weeks. Nevertheless, a single fire still threatens areas of the southwestern province of Muğla. Another fire that broke out in the Bozdoğan district of the western province of Aydın on Monday was put out hours later.

According to the latest figures by the Minister of Agriculture and Forestry Bekir Pakdemirli, the forest fire in the Köyceğiz district of Muğla, home to popular resort towns, is still out of control.

The fire in Köyceğiz started in scrubland before spreading to a large forest on July 29. Firefighters on the ground were faced with the challenge of responding to the fire on the slopes of a steep valley. Water bomber planes and helicopters made hundreds of flights to stop the flames from spreading further to residential areas. Nine helicopters were in the area on Tuesday for extinguishing efforts.

The first major fires began in Manavgat in the Antalya province, which neighbors Muğla, on July 28. Soon, more fires broke out in Antalya, Muğla and other southern provinces, including Adana and Osmaniye. The efforts of firefighters and volunteers paid off days later, though the fires left widespread destruction in their wake, completely burning villages, particularly in Antalya.

Investigations are still underway to determine the cause of the fires, though authorities had expressed that they suspected the PKK terrorist group's involvement. A suspect was apprehended over one of the fires in Manavgat last week. On Monday, another suspect, accused of starting a fire in Antalya’s Akseki district, was remanded in custody. Authorities did not disclose whether the suspects were affiliated with any terrorist group.

Speaking to reporters at a coordination center in Muğla late Monday, Agriculture and Forestry Minister Pakdemirli said 5,350 firefighters, 15 airplanes and 64 helicopters had been deployed to contain the fires. The minister noted that the blaze in Milas was difficult to contain as flames in scrubs have a longer burning rate, unlike pine forests. He said that they also managed to stop the fire from reaching a thermal power plant and had cleared the area around the plant of flammable materials as a precaution. Later in the day, Pakdemirli announced that Milas fire has now been taken under control.

On the Köyceğiz fire, Pakdemirli said it was “confined to the valley,” “under control” and will not spread further.

Sent to Turkey to assist in its fight against the wildfires, a Spanish crew has played an important role in containing the fires affecting large areas of forestland. In an interview with Anadolu Agency (AA), Maj. Juan Borrego, the field coordinator for the Spanish team, described their experience in Turkey and how they came together to douse fires in Marmaris, Milas, and Köyceğiz. Borrego applauded the coordination between his crew and the Turkish units, noting that the Spanish crew was made up of 27 members, five working in emergency management and 22 responsible for flights. The crew has experience containing fires in their home country, he said, but the wildfires in Turkey were the largest the Spanish team has ever faced. The team was impressed by the Turks' hospitability and, despite the reason for their visit, enjoyed their time in Turkey, he said. The Turkish coordination center handled the situation well given that there were several pilots of foreign origin involved in the process and planes with varying engines, capacities and water-loading systems.

Firefighter pilot Reynaldo Fernandez Boyero said that he would drop water on the fires 15 times a day, with his aircraft capable of carrying about six tons of water. He helped contain wildfires in Köyceğiz, along with the blazes that were approaching a power plant in Milas, he explained. He said the wildfires were the largest he had ever encountered in almost a decade, adding that the Spanish crew was very sad to see how the flames burned large areas, forcing many people to evacuate villages.

According to the Spaniard, working with foreign pilots was also an educational experience, and the team learned a great deal. The fight against wildfires will continue until they are all brought under control, he said, adding they would gladly do their part. The firefighting units start their operations at first light and work tirelessly without a break until nightfall, he said.