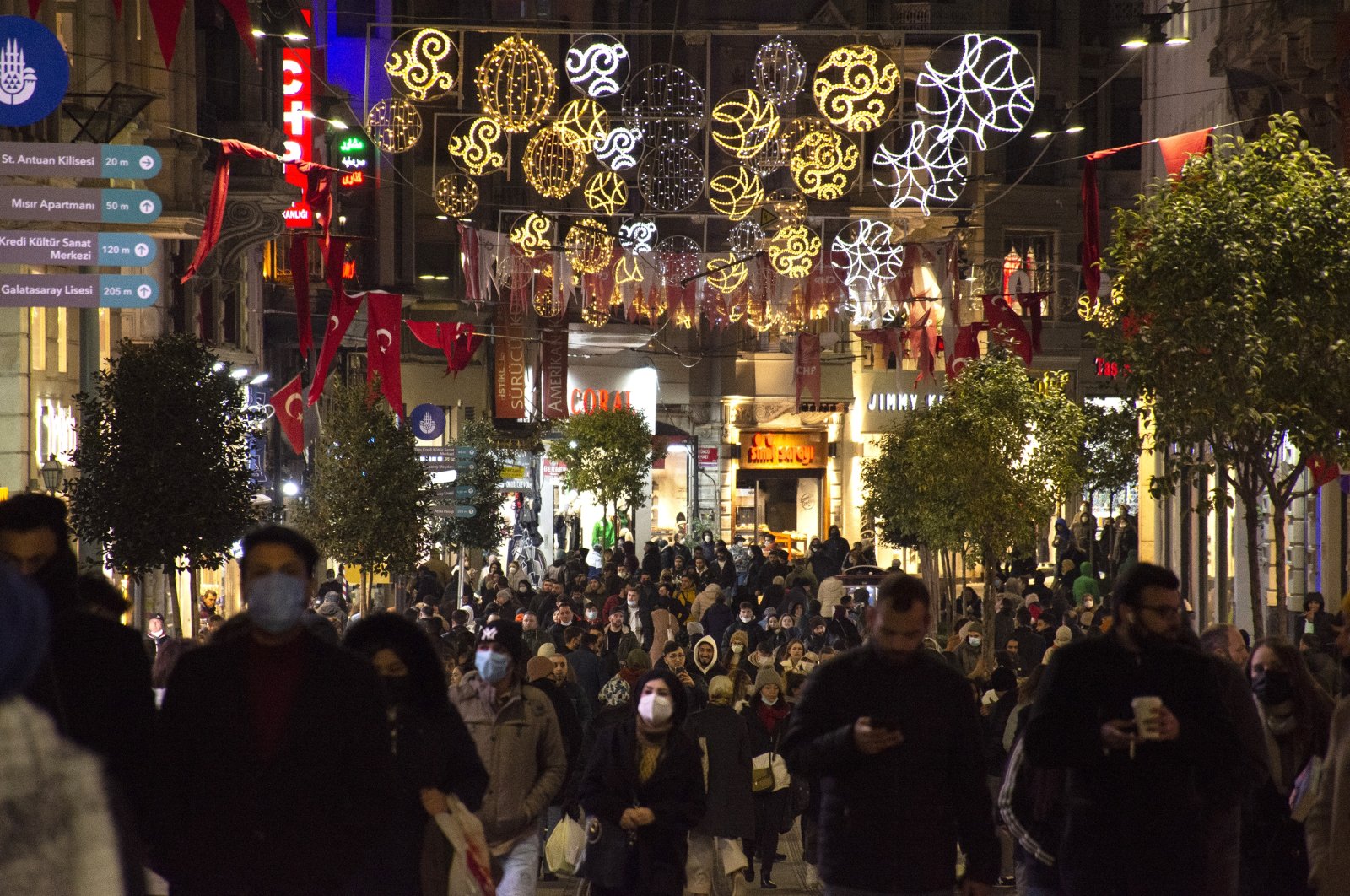 Although the difference is small, three big cities reported a drop in weekly coronavirus cases in Turkey where the omicron variant emerged as a new threat in the pandemic, accounting some 10% of the cases

Turkey's trial with the COVID-19 pandemic continues as the country prepares to bid farewell to the second year under the shadow of the deadly epidemic. The latest figures by Health Ministry shows that the pandemic is still going strong in most of the 81 provinces though the daily cases dropped recently.

The weekly figures for the period between Dec. 11 and Dec. 17 released on Monday indicate that Çanakkale in the west had the highest number of cases, 456 per 100,000 people of provincial population. On the other hand, big cities, despite the difficulty of containing the pandemic due to population density, saw a decline in cases.

Weekly figures are a precursor of the pandemic, which has gone through several "waves" in the country since it made its foray in March 2020. Nowadays, the number of daily cases fluctuate around 20,000 while the daily fatalities are below 200. Nevertheless, it took the country months to reach this new low, after a lengthy spell in the pandemic where daily cases were around 30,000.

No data is available yet but the omicron variant worries experts in terms of its ability to cause a new wave. Health Minister Fahrettin Koca had announced last week that the new variant, stronger than its predecessor, delta, in terms of the speed of transmission, was responsible for more than 10% of infections in the country.

Along with Çanakkale, Kırklareli in the northwest leads in the weekly figures, with 445 cases per 100,000. Ordu in the Black Sea region follows with 386 cases. Sparsely populated southeastern provinces have the lowest case numbers. Nine provinces are singled out by Minister Fahrettin Koca for sharpest rise in the weekly cases: Rize, Isparta, Artvin, Eskişehir, Trabzon, Kastamonu, Nevşehir, Ordu and Erzincan. Four of them are located in the Black Sea region, which had been at the top of the list of provinces with most cases in the past.

Turkey has tried every measure to contain the coronavirus pandemic since 2020 and imposed tight restrictions on daily life until last summer. Currently, only a handful of measures remain in place, including a mask mandate, social distancing and hygiene rules while the unvaccinated people are required to undergo polymerase chain reaction (PCR) tests regularly for access to usually crowded places. All coronavirus patients and their contacts are also being tracked through unique codes assigned to every citizen.

Rather than curfews and lockdowns, Turkey prefers a more eased approach to the pandemic nowadays while boosting its vaccination program instead. The program, launched in January 2021, has administered nearly 130 million doses while the number of people who were given two doses of vaccine exceeded 51 million, in the country of more than 83 million people.

As the country strives to overcome vaccine hesitancy among the public, jabs are viewed as the only way to curb the impact of the pandemic. With new variants emerging, experts call on people not to feel a false sense of protection from COVID-19 after getting two doses of the vaccines. They urge booster shots, particularly for those who had their two previous doses with inactive vaccines. Booster shots bear importance against new variants as the efficiency of two doses against them or the need for tweaking the vaccines to fight omicron is still being studied.

Professor Tevfik Özlü, a member of Health Ministry's Coronavirus Scientific Advisory Board, says that a third dose, three months after the second dose, is a must for the public, especially because of omicron. "As far as we know from the current studies, omicron is not affected much by the vaccines, even after two doses," he warned. Özlü told Demirören News Agency (DHA) on Monday that existing measures against the pandemic, which provides personal protection for every individual, are significant for protection against omicron as well. "We have to follow the same rules as we did against all variants of coronavirus. You don't have to do anything extra. Do not mingle with crowds much and do not socialize much. You have to keep your distance from others and properly wear your mask while you are near others. Thus, you will be protected," Özlü said. The professor added that the third dose was important to renew the body's immunity against omicron. "With the measures and vaccination, we can be spared from the damage of omicron."

Serap Şimşek Yavuz, another member of Coronavirus Scientific Advisory Board, warns that even three shots of the vaccine may not be sufficient to feel confident against omicron. "Though omicron appears to cause milder infections, no one should feel safe unless they take proper measures. Even if you can recover, you can infect someone else and in the end, may cause fatalities. Omicron, after all, is a fast-spreading variant," she told the Sabah newspaper on Monday.