‘COVID-19 caseload would be much higher without vaccination’ 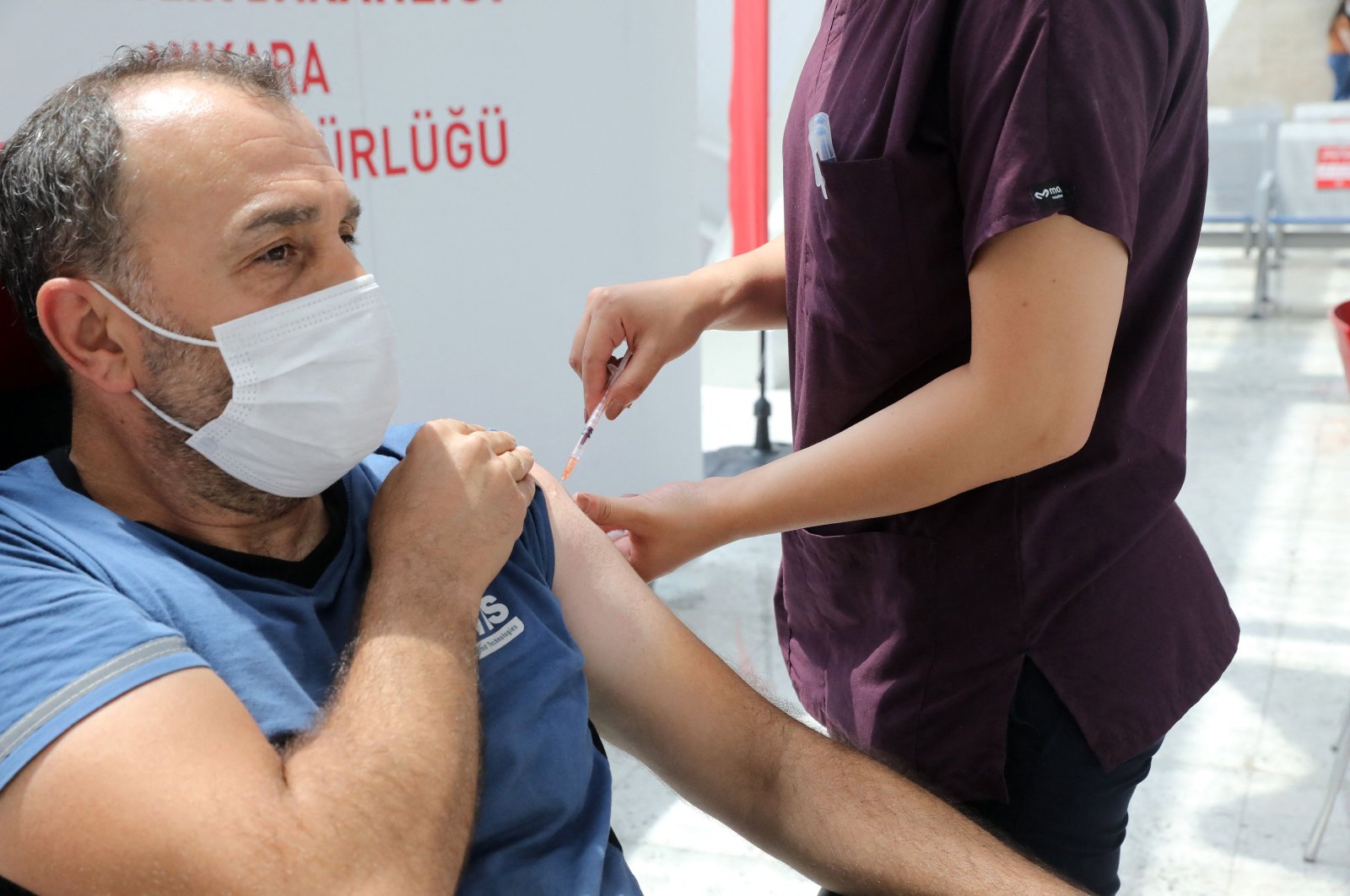 As the number of daily cases of COVID-19 infections continues to rise in Turkey, the health minister urged more people to get vaccinated as a COVID-19 Scientific Advisory Board member noted that the situation would be much worse without vaccines

With the arrival of summer and the lifting of restrictions, daily infection rates have been spiking in Turkey recently. Health Minister Fahrettin Koca and Coronavirus Scientific Advisory Board member professor Mustafa Necmi Ilhan urged citizens to get vaccinated as soon as possible to avoid even higher infection rates.

“Nearly 23 million people have not been vaccinated yet,” Koca said in a tweet early Sunday.

“The number of people who haven’t got the second dose stands at 17 million,” he added, noting that the number of senior citizens and people from other special groups who require a third dose but have yet to do so stands at 9 million.

“To have the desired results, we have to complete the process fast,” he said.

“The problem now is slacking off on the precautions. Let’s take back control,” Koca concluded.

“We all know that gathering in crowds, especially in poorly ventilated areas and concentration of the population are the biggest factors for spike in COVID-19 case numbers,” he told Ihlas News Agency (IHA) on Saturday.

“This trend seems to continue for some more time,” Ilhan added.

“To be honest, it wouldn’t be wrong to assume that the caseload would be much higher now if vaccines weren’t available.”

“In those provinces, the case numbers get higher faster too. When we consider the relation between vaccination and the spike in case numbers, it is a must that we call upon our citizens there to get vaccinated as soon as possible,” he added, underlining that local officials and health workers should encourage the population to get vaccinated.

Ilhan also added that the provinces with low vaccination rates also tend to have younger populations compared to other cities.

“There is a resistance among the youth to get vaccinated; they don’t want to get the jabs much,” he said.

“Unfortunately, some of our colleagues who are engaging in anti-vaccine efforts have a part in this, and also the disinformation on social media,” Ilhan added.

“But one of the factors that prolonged the human life expectancy from 40s to 70s, 80s is the mass vaccination,” he said.

“We have to persuade our youth. There are urban legends and myths that have not been scientifically proven,” Ilhan concluded, pointing to the so-called arguments that anti-vaxxers propagate to instigate fear among the public, leading to more and more casualties each day.

The country continues its intensive vaccination campaign to curb the spread of COVID-19, and all residents aged 18 and over are eligible for shots.

According to the Health Ministry, nearly 39.3 million people have received their first dose, while over 22.4 million are fully vaccinated.

To date, over 63% of the adult population has received at least one vaccine dose.

A new decision by the Health Ministry may further boost the campaign by saving on precious vaccines. Though Turkey does not suffer from any problems accessing the two vaccines it approved, China’s CoronaVac and the Pfizer-BioNTech COVID-19 vaccine, it still needs to ensure its stocks are not depleted as a precaution and for “booster” doses.

The ministry canceled second dose appointments for people who had recovered from coronavirus and were administered the first dose of the Pfizer-BioNTech vaccine. Last month, the ministry pulled the timeframe of vaccine requirements for recovered coronavirus patients from six months following recovery to three months. Experts say one dose of the Pfizer-BioNTech vaccine is sufficient to develop an immune response.

Now, vaccination aversion remains the biggest challenge for the country. Social media is awash with messages of anti-vaxxers and vaccine skeptics voicing their concerns over the jabs. Conspiracy theories such as “tracking chips” being used in vaccines, unproven allegations that jabs cause infertility and rumors that vaccinations make people "magnetic” proliferate. Officials repeatedly urge people to get vaccinated, while scientists look to assure the public that the vaccines are safe.

In the meantime, work is underway on locally made vaccines. Most are still in the early stages of development, but scientists hope to achieve results this year. Vaccines being developed in the country range from an inactive vaccine to an intra-nasal spray and a virus-like particle (VLP) vaccine. President Recep Tayyip Erdoğan told reporters that universities and pharmaceutical companies are working hard, and he expected “mass production” would start in September or October “based on what they pledged.”

The country has also started to inoculate volunteers with a Turkish-developed COVID-19 vaccine.

"This is the last phase in its development as it has entered the human trials phase," Health Minister Koca said.

Koca also noted that studies are being carried out to determine which vaccines can be mixed and matched if scientific research proves that a third dose is necessary. The country has contemplated offering a third dose to citizens in the six-month period after the second dose. Experts say a vaccine other than what a person received for their first two doses can be used. Thus, the country could have more access to vaccines, something vital amid the ongoing “vaccine wars” between countries. Professor Ismail Balık, who heads the Department of Infectious Diseases at the Faculty of Medicine of Ankara University, says a locally made vaccine currently in the trial phase, can be used as a third dose. Balık told Demirören News Agency (DHA) on Tuesday that the vaccine developed by Erciyes University was an “inactive vaccine,” using the same technology as CoronaVac and would be fit for people injected with the Chinese vaccine.

The Ministry of Health also confirmed 12,381 new infections and 58 COVID-19 related deaths in the last 24 hours, while as many as 5,383 more patients recovered.

Amid a nationwide drop in cases and an expedited vaccination drive, Turkey entered a normalization phase on July 1, lifting almost all virus-related restrictions.

However, seeking to limit the spread of the virus' delta variant, the country has suspended flights from India, where the strain was first detected.

Meanwhile, arrivals from the U.K., Iran, Egypt and Singapore must have negative COVID-19 test results within 72 hours before their departure.

Since December 2019, the pandemic has claimed over 4.09 million lives in 192 countries and regions, with more than 190.65 million cases reported, according to the U.S.-based Johns Hopkins University.