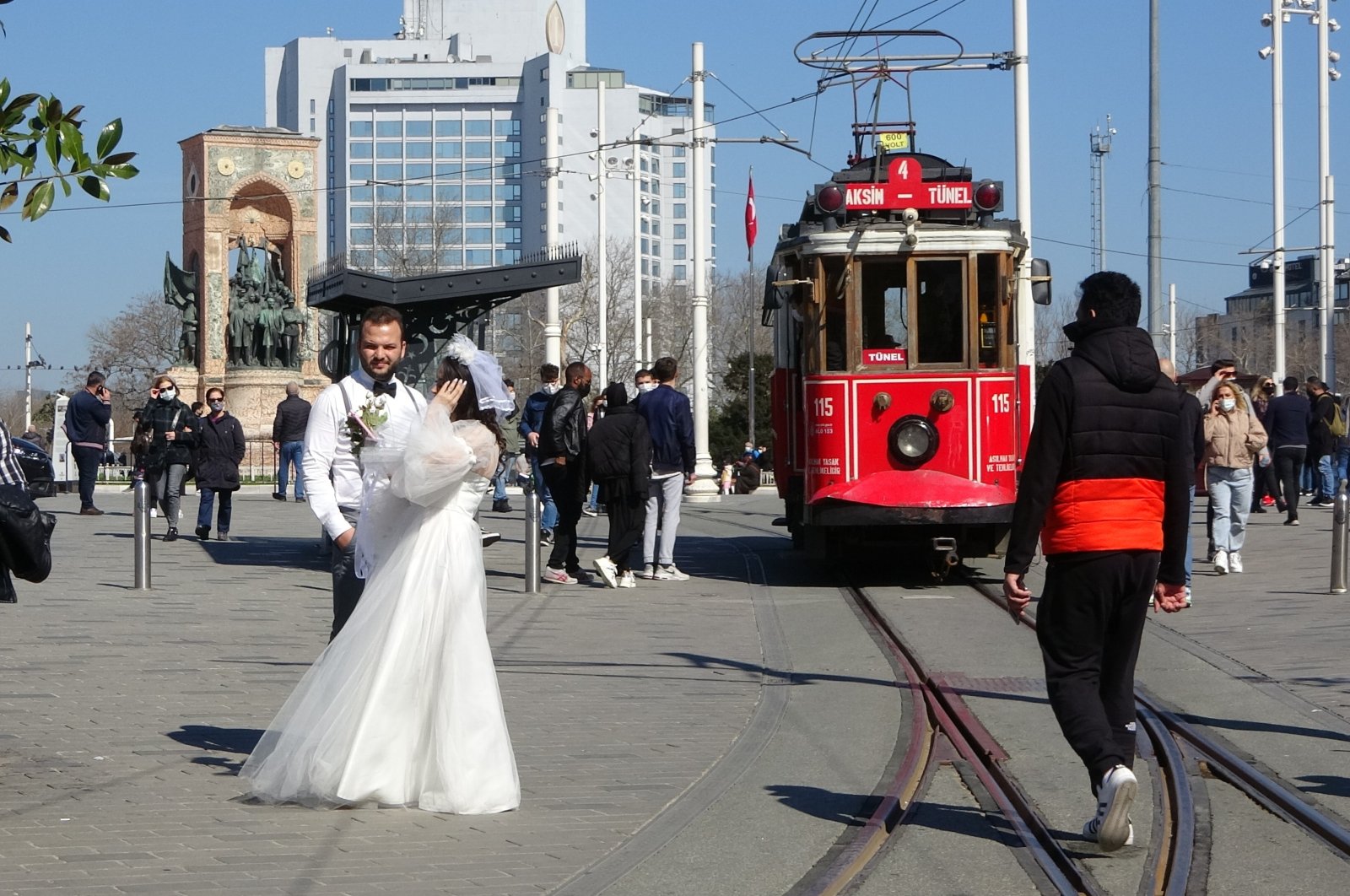 A newlywed couple poses for a photo in Istanbul's famous Taksim Square as people enjoy the first Saturday without a lockdown, March 6, 2021. (IHA Photo)
by Daily Sabah with Agencies Mar 07, 2021 12:51 pm

Turkey’s three biggest cities, Istanbul, Ankara and Izmir, experienced a rise in coronavirus cases over the last week as the eastern and southeastern parts of the country enjoyed relative calm, data from the Health Ministry showed Sunday.

According to the data, the number of cases per 100,000 people in Istanbul recorded a jump to 111 from 89 compared to the previous week, while Ankara’s caseload increased to 54 from 39 as Izmir’s coronavirus cases hit 66 from the previous week’s 53.

The data also showed that northern provinces in the Black Sea region still have the highest ratio of coronavirus cases to healthy people.

Northern Samsun province currently ranks first in the number of coronavirus cases with 348 patients for every 100,000 citizens – a significant increase from the previous week’s 262.

Meanwhile, northern Sinop province registered its biggest weekly increase with a jump to 314 from the previous week’s 160.

There was also good news in the region, Ordu province recorded a drop in cases, reporting 280 compared to the previous week's 301.

Uşak province is an exception being that it is the only “blue” city, meaning that it is among the towns with the least number of cases in the western region of the country.

Other than Uşak, all other “blue” cities are located in the eastern and southeastern parts of Turkey, which all have below 35 patients in every 100,000 citizens.

Even though the eastern and southeastern parts of the country continue to enjoy relative calm, things are more complicated in the big cities, especially Istanbul.

With the easing of COVID-19 restrictions, traffic jams occurred in many big cities in Turkey but Istanbul, a city of nearly 20 million people notorious for its congestion, was hit particularly hard.

After more than 100 days of restrictions that took a toll on businesses and confined millions to their homes for most of the week, the government announced a new "normalization" process.

The new era, named the "controlled normalization process" by President Recep Tayyip Erdoğan, is hailed by residents of provinces reporting low case numbers, but people living in coronavirus hot spots will have to hold on a little longer for a return to the old days when movement was not restricted. The curfews have been partially lifted, and some closed businesses were allowed to reopen across the country, except in places at the highest risk level.

Erdoğan gave the good news to the public after a Cabinet meeting on Monday and announced the weekend curfews in "low- and medium-risk provinces" would be removed. In riskier places, they will remain in place on Sundays, and a night curfew for weekdays and Saturday nights will remain intact. Primary schools, which have been closed for months, also reopened on Tuesday, after a one-day delay. In-person education also resumed for middle and high schools in low- and medium-risk provinces. Schools in rural areas with no COVID-19 cases already reopened last month.

The major beneficiaries of normalization are undoubtedly the owners and staff of restaurants and cafes, which were mandated to serve only takeaway meals since November 2020. Except for high-risk regions, eateries were permitted to reopen Tuesday. Under the new rules, they will be allowed to operate from 7 a.m. to 7 p.m. at half capacity and will be mandated to ask for customers' Hayat Eve Sığar (HES - Life Fits Into Home) code, which is used by the Health Ministry to trace COVID-19 positive people.

Despite the resumption of normal life, the pandemic has devastated many smaller restaurants and cafes that suffered heavy financial losses. Though takeaway services continued, they were limited and businesses that could not afford to hire extra staff to make the deliveries suffered the most. The government last month announced that the country would provide financial support to the affected businesses. The support can be claimed by businesses, such as restaurants and cafes, whose 2019 turnover was TL 3 million ($426,433) or less. Businesses, whose turnover has decreased by 50%, will be provided between TL 2,000 and TL 40,000 payment support for loss of turnover. The government in January also announced it would be postponing income tax, withholding tax and sales tax payments for businesses that have seen activities temporarily suspended.

More restrictions will be lifted or reintroduced based on the number of COVID-19 cases in each of the 81 provinces. Certain basic rules, like mandatory masks and social distancing, also remain.

The country has implemented a color-coded, regional approach to tackling the virus. Provinces at very high risk are deemed "red," while others with lesser cases are respectively classified as "orange, yellow and blue." The categorization is based both on the number of cases and vaccination rate as the country started its inoculation drive on Jan. 14, 2020. This month, Turkey's Health Ministry started issuing maps showing the average number of weekly cases for each province. The authority to remove or impose restrictions was delegated to provincial public health boards, straying from the previous centralized approach.

Vaccination is the secondary criteria for reopening, and Erdoğan said that Turkey has vaccinated over 10% of its total population so far. As of Tuesday, more than 9 million people had been vaccinated, including nearly 2 million people who were administered their second jabs after a 28-day interval.