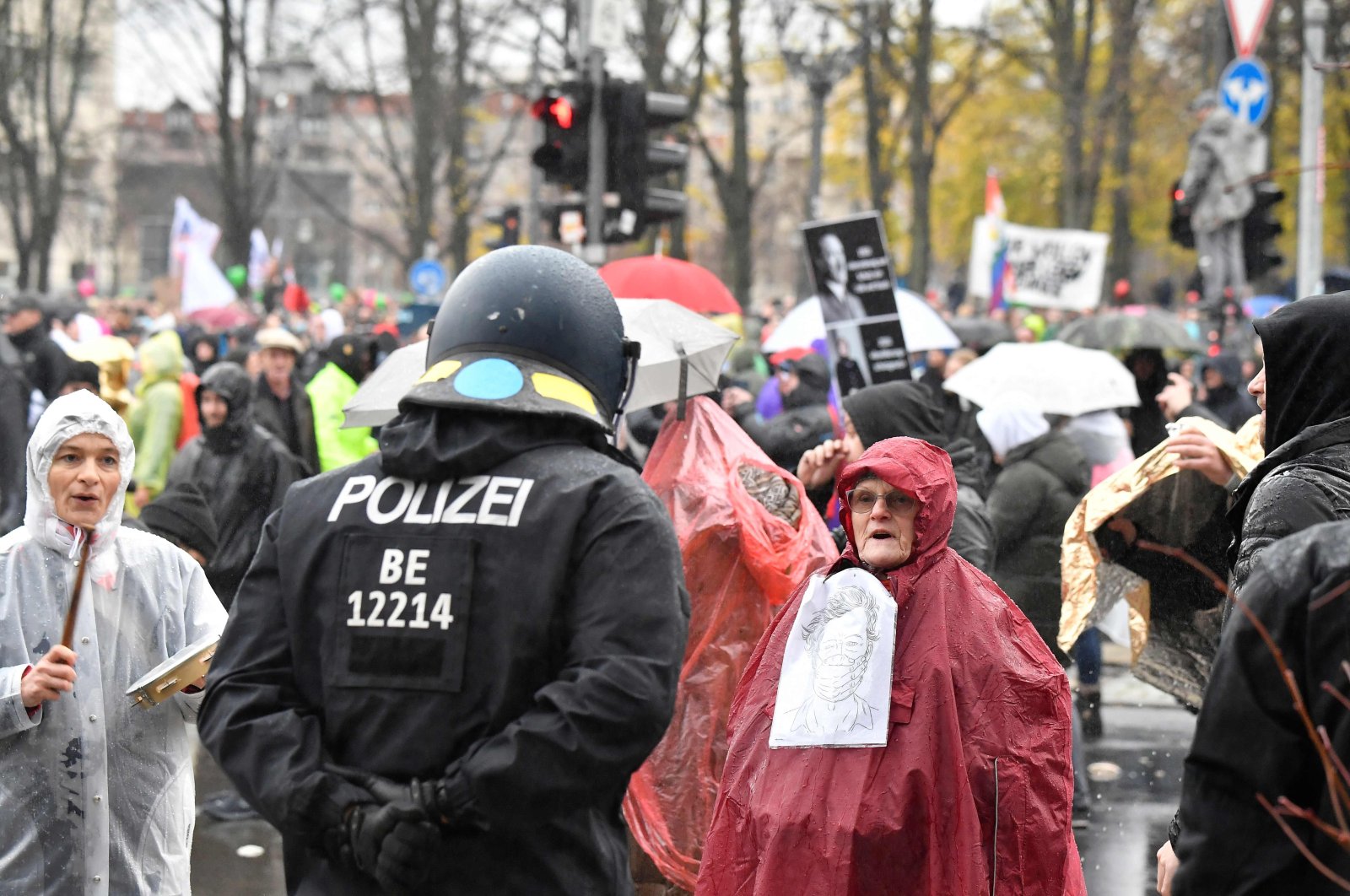 A police officer talks with protesters demonstrating against measures imposed by the German government to limit the spread of the coronavirus, close to the Reichstag building housing the Bundestag (the lower house of parliament) in Berlin, Germany, Nov. 18, 2020. (AFP Photo)
by Daily Sabah with AA Feb 06, 2021 6:13 pm
RECOMMENDED

Cemil Başöngen, 50, and his daughter, Yasemin Başöngen, 17, were hospitalized as a result of police violence in Germany's North Rhine-Westphalia state.

Speaking to Anadolu Agency (AA), Cemil Başöngen, a factory worker living in Germany since 2001, said that the police used disproportionate violence against him and his daughter due to a simple incident on Feb. 3.

He said the incident occurred after his daughter had an argument with her friends, who then called the police.

"While I was waiting for her outside, the police came within five minutes. The police had told my daughter to step away and so she went downstairs ... Because my daughter went downstairs, a female police officer angrily went after her and knocked down my 17-year-old daughter with another officer that had entered from outside (the house)," Başöngen recounted.

He said he was also attacked by another male officer when he tried to separate the police from his daughter in a bid to protect her.

"That burly cop got on top of me. He punched me twice and I lost consciousness and he handcuffed me behind the back. At that time, they took my daughter in a police car. I was already unconscious and didn't see this," he said.

Once at the police station, Başöngen said he saw his daughter's face and hair were covered in bloodstains.

"When they opened the handcuffs and let me see my daughter, her face and hair were covered in blood. Before getting out of the vehicle in front of the police station, they had severely beaten her up. Her cheekbone was broken. Her nose was bleeding. There was no need for this beating. They called an ambulance and took her to the hospital," he said.

He added that his daughter said the police had threatened to kill her.

Başöngen said the doctor gave him a five-day incapacity report. He added that he would file a criminal complaint about the incident.

Cases of illegal police violence in Germany have become more common recently, as a 2019 report revealed that at least 12,000 illegal attacks are carried out by police officers annually. However, only a fraction of unlawful police violence is exposed to the public eye in Germany. So far, the official numbers have led the public to believe that this number did not surpass 2,000 cases on average per year, as most cases simply weren't reported or taken to court for legal action. The number of unreported cases might be much higher, according to research done at Ruhr-University in Bochum.

Racist officers among Germany's police force also intentionally target Turkish people and other minorities in what they call "Turk hunts," according to a recent study on racism and police violence in the country.

Germany has been recording Islamophobic crimes separately since 2017. The total number of cases in 2019 has not been officially announced. In 2018, there were 910 incidents, including 48 attacks on mosques alone, a little lower than in 2017 with 1,095 crimes. More than 90% of these were attributed to politically motivated crimes committed by the far-right. Although the overall number of crimes has decreased, assaults have increased, the German daily newspaper Die Tageszeitung stressed. In 2017, authorities reported 56 Islamophobic assaults resulting in 38 injuries. In 2018, there were 74 offenses with a total of 52 injuries – including two attempted murders.