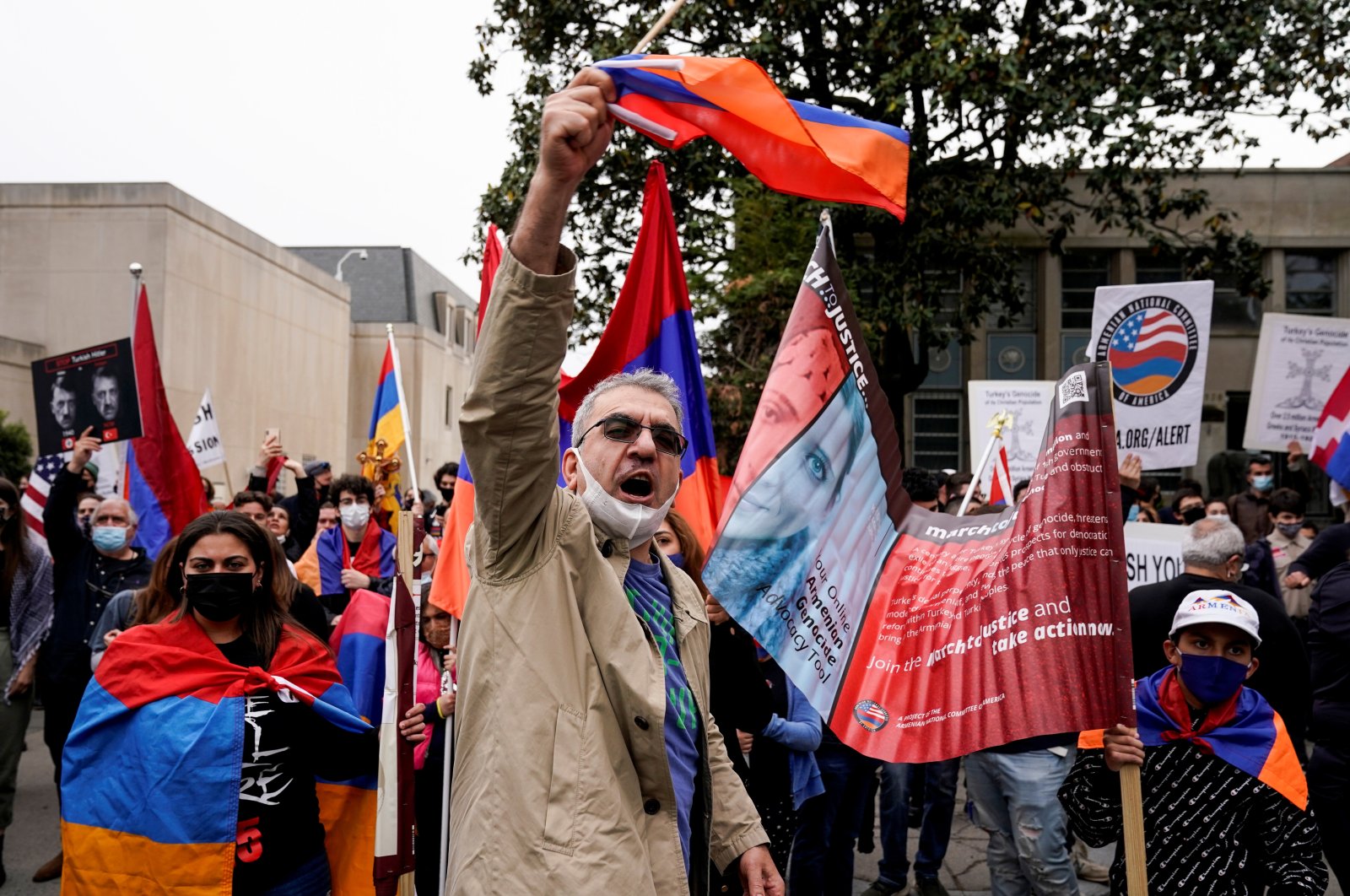 Members of the Armenian diaspora rally in front of the Turkish Embassy after U.S. President Joe Biden recognized that the 1915 massacres of Armenians in the Ottoman Empire constituted genocide in Washington, D.C., U.S., April 24, 2021. (Reuters Photo)
by Daily Sabah with AA Apr 27, 2021 1:12 pm
RECOMMENDED

A Turkish city councilor in Valence, France, was forced to resign on Monday after liking a post in memory of Turkish diplomats killed in attacks by the Armenian terrorist organization ASALA.

A member of the city council committee, Yasin Yıldırım liked an image on social media shared by his brother by the Turkish Ministry of Foreign Affairs with the caption: "Our martyr diplomats from the Armenian terrorist attack."

Due to complaints and pressure from Armenian associations in reaction to Yıldırım liking the image, Mayor Nicolas Daragon asked the official to resign.

During last year's election campaign, Armenian associations targeted Yıldırım for liking content that denied the Armenian claims regarding the 1915 events.

Thanks to the strong pressure from Armenian lobbies, a law was enacted in 2001 in the French parliament recognizing the Armenian's claims about the events of 1915.

Additionally, the law, which was passed by parliament under the pressure of the Armenian diaspora, criminalizes denying the Armenian version of events. The law also stipulates that those who commit the offense can be sentenced to a year in prison and a fine of 45,000 euros ($54,345).

The French Constitutional Council, upon the reactions, found the law violated freedom of expression and annulled it.

France is an important country for the Armenian diaspora. There, it is able to conduct anti-Turkey propaganda through the lobbying activities of hundreds of organizations.

While almost 2 million Armenian people live in Russia, making it the country hosting the largest number of Armenians, the diaspora focuses its lobbying in the U.S. and France.

In France, where Turkish and Islamic organizations have been banned due to accusations of separatist activities, there are 575 associations run by Armenians.

Turkey's position on the 1915 events is that the deaths of Armenians in eastern Anatolia took place when some sided with invading Russians and revolted against Ottoman forces. A subsequent relocation of Armenians resulted in numerous casualties, made worse by massacres conducted by militaries and militia groups from both sides. The mass arrests of prominent Ottoman Armenian politicians, intellectuals and other community members suspected of links with separatist groups, harboring nationalist sentiments and being hostile to the Ottoman rule were rounded up in then-capital Istanbul on April 24, 1915.