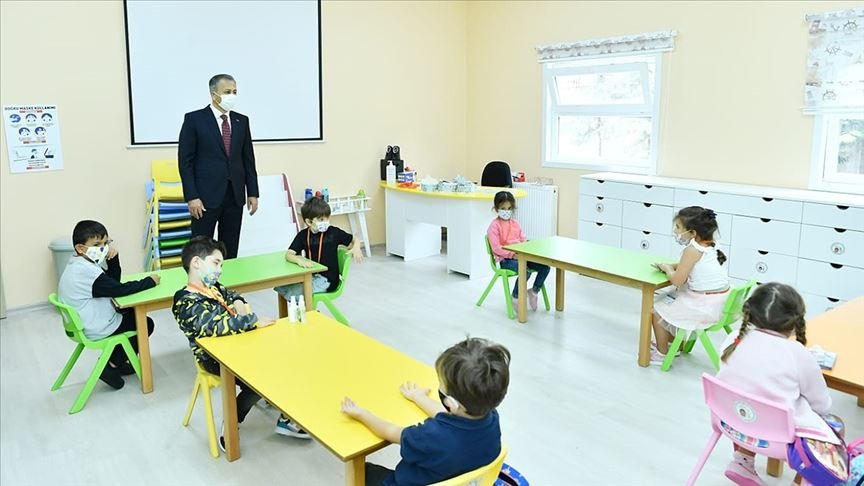 Authorities hope to resume in-person education, which fell victim to the coronavirus pandemic, with a new measure in hand: vaccines. Teachers, who were not included in priority list for inoculation that started last month, will now get their first jabs later this month, probably before the reopening of village schools on Feb. 15. Reopening, which will coincide with start of second semester, will later be expanded to more schools across the country on March 1.

Schools were closed amid concerns of a new surge in the outbreak which claimed 26,237 lives since March 2020. President Recep Tayyip Erdoğan announced after a Cabinet meeting on Monday that schools in rural areas would be the first to resume education. Primary schools, between grades 8 and 12, will start in-person education on March 1 while the schedule for other grades is not clear.

When Turkey last resumed in-person education, which ended shortly after the outbreak made its foray into the country in March 2020, it did not have a vaccine and the public appeared to be less compliant with mask-wearing, social distancing and hygiene rules as the daily cases indicated. Cases nowadays fluctuate well below 10,000, with an occasional uptick. Professor Mustafa Necmi Ilhan, a member of Health Ministry’s Coronavirus Scientific Advisory Board, says the vaccination of teachers will facilitate reopening. “Children should not lag behind in education, but this does not mean that we should ignore the measures. Teachers, students, their parents should comply with rules,” he told Anadolu Agency (AA) on Wednesday.

Schools already have a set of guidelines and measures in place, from enforced social distancing in classrooms, mandatory masks and delivery of hand sanitizers.

The country started mass vaccination with the imported CoronaVac, a vaccine developed by China’s Sinovac, and health care workers were the first to get jabs. They were followed by senior citizens. So far, more than 2.3 million people have been vaccinated.

The Ministry of National Education will send a list of teachers to the Health Ministry that will enable health care workers to set appointments for teachers. Ilhan said teachers can have their shots anywhere, from hospitals to neighborhood clinics. “It is the right time now. Antibody levels required for protection against the virus can only be developed with a four-week interval between two doses of vaccine. The body can produce a good antibody level in seven to eight weeks. If we start it now, the majority of teachers will be vaccinated until a busy spring curriculum,” he said.

Some 130,000 students will be back to school on Feb. 15. Another 5 million will return to school in March. In-person education will be two days in a week, and students will spend rest of the week at home but with remote education or live classes. Students are not required to attend in-person classes. The government left it to the consent of parents as it did when the schools were reopened last year. Additionally, pandemic boards in each of the 81 provinces will be authorized to shut down schools there again in case of a surge in the number of cases.

In a press conference on Tuesday, Minister of National Education Ziya Selçuk said village schools were prioritized as the number of cases in villages and rural areas was low or nonexistent. Selçuk said that they took all measures for safety of schools against the outbreak. “We need a decline in the outbreak for achieving our goal to keep schools open in the future and this is possible only if the public complies with hygiene rules, wear protective masks and adhere to social distancing,” he said.