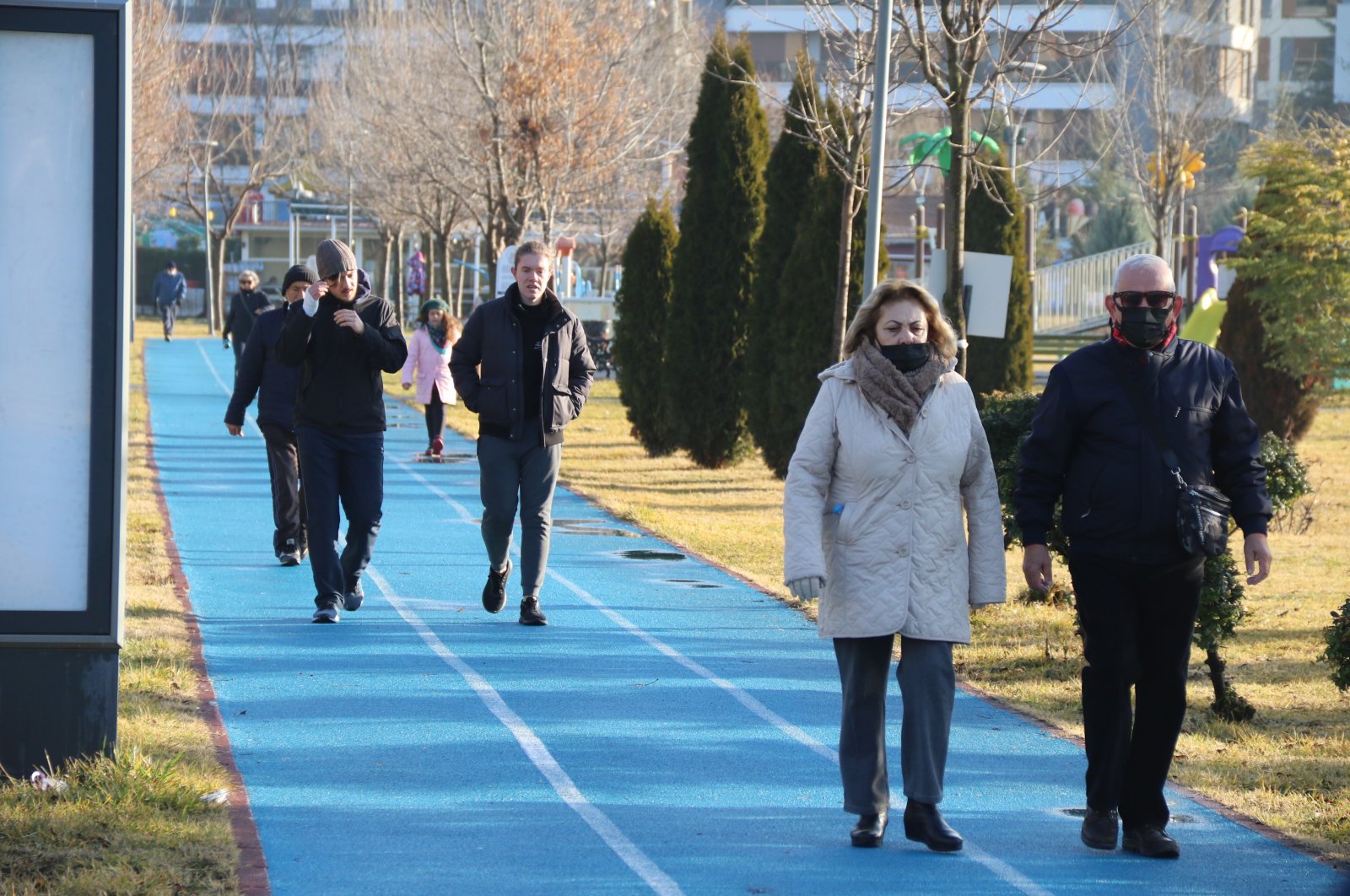 Turkey closed 2021 with an uptick in cases according to weekly figures from the last week of December, which put the central province of Eskişehir, as well as Istanbul, at the top of the list of provinces with the highest number of cases

The risk of the coronavirus ran high across Turkey in the last week of 2021, according to the latest figures by the Health Ministry. Ten provinces recorded a significant surge in weekly cases. Eskişehir had the highest number of cases, with around 825 per every 100,000 people in the central province. Istanbul followed with around 663 cases, a more than twofold jump compared to the earlier period from December 2021. Izmir, the country's third largest province, also had a sharp jump, from around 68 to 323 cases. Aydın, Çanakkale, Muğla, Kırklareli, Edirne and Kocaeli also had high increases in weekly cases and all are located in either western or northwestern Turkey. The northern province of Gümüşhane was the only area from another region among the places with the worst surges in cases per 100,000 people.

The lowest number of cases, once again, was concentrated in the sparsely populated southeastern and eastern regions. Van and Ağrı, the two easternmost provinces neighboring each other, had the distinction of the lowest number of weekly cases, at around 2 per 100,000. However, the situation is alarming for the country which had seen a drop in weekly cases in 65 out of 81 provinces in the week between Dec. 18 and Dec. 24.

Factors vary in the surge, which was already reflected in daily cases that remained above 60,000 for most of last week. On Sunday, the number of daily cases were above 61,000 while fatalities were 173. December was one of the worst months in recent memory in terms of upward trends in the number of cases. The fast-spreading omicron variant is the main culprit in the sudden surge of COVID-19 cases, while authorities repeatedly called on people to take their third dose of vaccines for extra protection against the variant.

More than 21.6 million people in Turkey have had their third doses of vaccine while the number of people with two doses exceeds 51.8 million, in a country of more than 83 million people. Experts say the surge may also be linked to people dropping their guard against the coronavirus after Turkey lifted most of its pandemic-related restrictions in the summer of 2021.

An increase in the number of cases is common during the winter when more people spend time indoors, and cases, unfortunately, multiply if they skip still-mandatory health measures like wearing protective masks, social distancing and hygiene routines.

One solace for the country is the relatively steady number of fatalities, which has long been below 200. Health Minister Fahrettin Koca had earlier highlighted that the hospitalizations were less common nowadays despite the surge. Though no concrete data is available, experts say the omicron variant has so far been mild for a majority of patients. Koca on Sunday tweeted that although COVID-19 hospitalization rates rose by 6.2% in the country, there was no significant uptick in intensive care stays stemming from the coronavirus. Koca had also pointed out that a majority of fatalities were patients aged 60 and above, as well as people with other chronic illnesses.

Professor Faruk Yorulmaz, a public health expert from Trakya University, said although the fatality and severity of the coronavirus cases have been reduced, it is more infectious now. "We can see a rise in the number of severe cases if the number of cases continues to be higher," he added.

He said there was also a risk of "reinfection" from new variants for people who have recovered from earlier variants of the coronavirus. Experts say the number of cases may exceed 100,000 per day in the coming weeks, especially in the aftermath of mass New Year's celebrations which most people attended without wearing masks or heeding to social distancing measures, both on the streets and at parties held in indoor venues.

Yorulmaz told Anadolu Agency (AA) on Monday that in the earlier incarnations of COVID-19, recovered people developed immunity against future infections, but the omicron variant has frustratingly changed that. He also underlined that the immunity levels provided by vaccines were lower against the omicron variant, compared to earlier strains of the coronavirus.

He blamed anti-vaxxers for persuading people to abandon protective measures against the pandemic for the sudden surge. "If we cannot stop variants, there will be more. Heeding the protective rules are the only way," he said.

Another danger that the omicron variant poses has to do with symptoms that are very similar to influenza, creating a misperception among the public that they have simply been suffering from a seasonal sickness, rather than the deadlier and more infectious COVID-19. Professor Recep Tekin, an infectious diseases expert from Dicle University, said these symptoms were particularly prevalent among children and warned parents to suspect that their children who have symptoms like fever and fatigue might actually have caught the omicron variant. "It would be better to have their children tested against COVID-19 if they have such symptoms," he told AA.