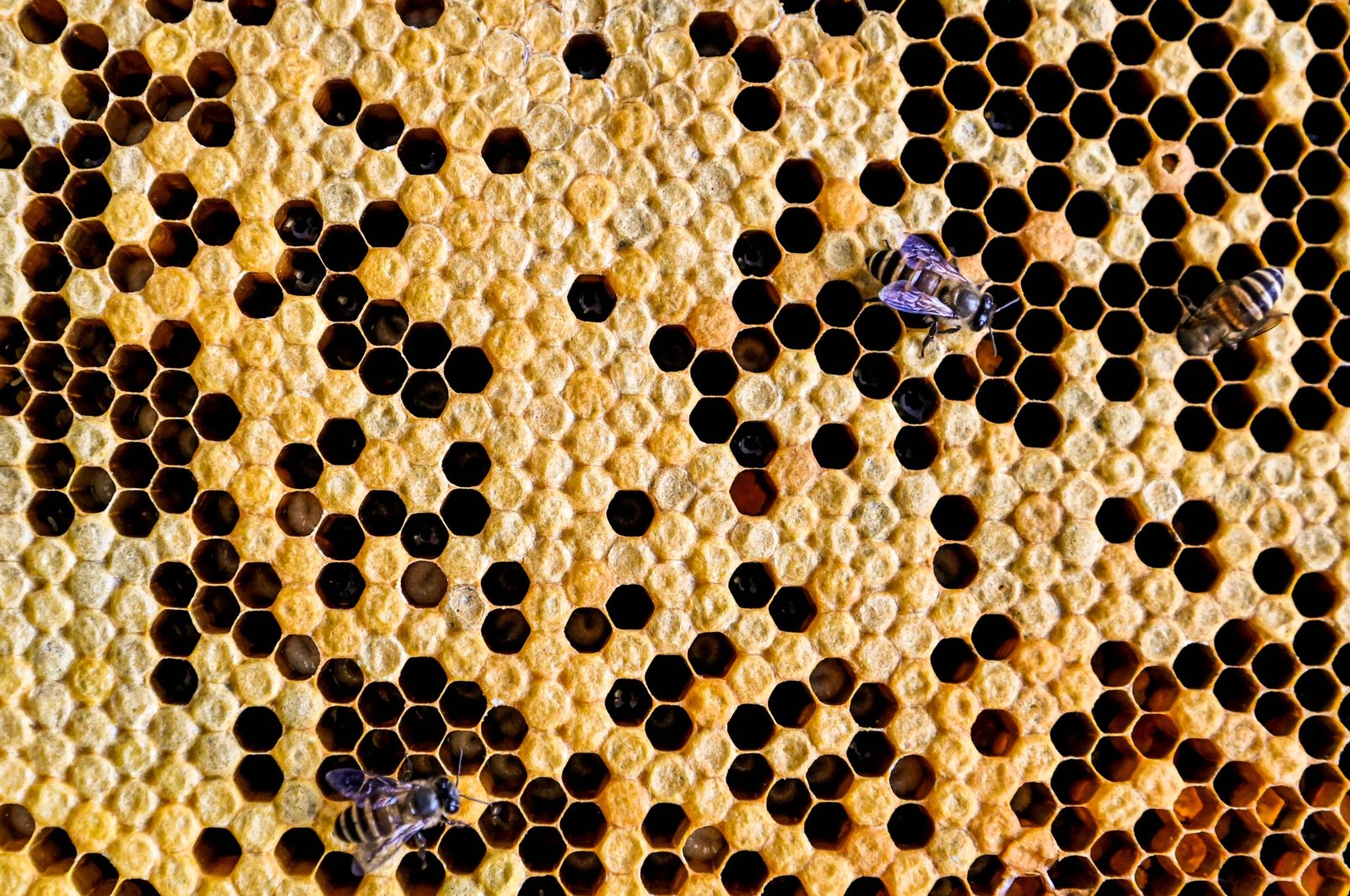 This picture taken on April 23, 2021 shows rescued bees on a honeycomb in the parking lot of an apartment building in Kuala Lumpur. (AFP Photo)
by Leyla Yvonne Ergil May 25, 2021 7:38 am

Known as one of the oldest medicinal substances, honey has always held a special place in Turkish culture

Turkey is a major global producer and consumer of honey, which should come as no surprise due to its vast history in the country with this beloved nectar. In honor of last week’s World Bee Day, which was May 20, it is an opportune time to honor their hard work in Turkey.

Honey has been used for consumption and medicinal purposes for at least 10,000 years on these lands we call home. Wall paintings and other motifs found at Çatalhöyük alone date back to 8,000-7,000 B.C., while coins found at Ephesus and the mentioning of honey in the classic works of Homer all point to the importance the beloved bee product has held throughout history in what is now present-day Turkey.

These days, honey adorns nearly every Turkish breakfast prepared in the country, while it is also used to treat a whole host of medical ailments.

Well over 100,000 tons of honey is produced annually in Turkey and much of that is consumed domestically. Migratory beekeeping is also widespread and thus it is a regular practice for beekeepers to transport their hives to different regions of the country depending on the time of year. Their boxes are regularly spotted by hikers and nature lovers alike.

Any novice, when it comes to this sweet nectar of bees, may be surprised to learn that not all honey tastes one and the same. The taste and properties of honey can vary significantly based on the location and plant variety it was made from. In Turkey, there are a wide variety of honey flavors that hail from different regions and that are used in different capacities. The following is a guide for expats and visiting foreigners to learn more about the different types of honey, or what could literally be called “Turkey’s liquid gold.”

Produced from nectar collected directly from flowers by worker bees, flower honey is the most popular and widespread variety found on tables, in homes and at markets in Turkey. In general, this honey is made from a variety of flowers and is thus a “poly-floral” honey that doesn’t contain any particularly distinct flavor other than the familiar sweetness we associate with the product. Thus, this type of honey is the most popular variation found in foods and it is as an integral part of the classic Turkish breakfast spread, as well as other Turkish dishes. While there are also a wide variety of honeys made from the flowers of a single plant or tree species, which is referred to as “mono-floral,” in Turkey, these variations are usually referred to by the name of the plant species they are produced from. In general, the most prevalent types of mono-floral honey found in Turkey are chestnut, sunflower, lavender, carob, lemon and orange blossom, while some of the more rare types are alfalfa, eucalyptus, linden, mint and rosemary.

Accounting for 92% of the world’s pine honey production, this variety of honey is widely available in Turkey and is predominantly produced in the country’s southern Aegean and western Mediterranean regions. Three-quarters of the pine honey produced in Turkey is in fact derived from Muğla province alone. Unlike flower honey, pine honey is actually produced from honeydew, which is a liquid secreted from a type of insect that lives on pine trees. Yes, if you haven’t figured it out as of yet, pine honey is produced by bees utilizing insects’ excretions rather than from the nectar released from flowers.

Pine honey is known for being darker and less sweet than flower honey. It is also said to have a lower glucose and fructose content yet contains some of the highest levels of enzymes, amino acids and minerals among various honey types. It is believed to be a weight loss aid that works by starting off the morning by drinking a glass of warm water with a tablespoon of pine honey.

Most prevalent in the Mediterranean region, there are a variety of citrus honeys that are revered for their aromatic flavors in Turkey. These types of honey include lemon, orange, mandarin and grapefruit and are either harvested from one type or multiple types of citrus tree blossoms. This honey is favored for consumption due to its perfume-like flavor and scent as well as for containing high amounts of Vitamin C, while also being lower on the glycemic index than other honey variants. This type of honey is thinner in consistency and does tend to crystallize, in which case it is advised to place the jar of honey in a bowl of warm water for the crystals to dissipate.

Chestnut honey hails from the nectar of flowers on chestnut trees that only blossom for a fortnight in June in forests along the northern Black Sea coastal region. Known for its strong and distinctly bitter flavor, chestnut honey is more frequently used for its medicinal purposes, which includes easing symptoms from asthma and respiratory issues, to give energy and as a cure for bad breath. It is also used topically to heal burns.

This particular honey, which is lighter in both color and flavor, is produced in Turkey’s western Thrace region. Known for its tendency to crystallize, sometimes this honey is mixed with other types of flower honey for consumption. Its medicinal purposes include relieving fevers and strengthening the immune system.

Not for the fainthearted, thyme honey has a distinctly acrid flavor that can be strong for some, while it is lighter in color than other honey varieties. Revered for its medicinal properties, it is said to cure flu symptoms and coughing, relieve bloating and increase appetite, while it is also used topically for eczema and to stop itching.

This rarer lavender honey variation has a distinct flavor and deep amber color and is primarily produced in the month of June in the Isparta and Burdur regions of western Anatolia. Favored for its curative properties for sleep disorders and for being a natural pain reliever, this type of honey can be seen used as an accompaniment on gourmet cheese plates.

Another rare form of highly valued honey is acacia honey produced from the nectar of its eponymous flowers in the Kaçkar Mountains in Artvin. Amongst acacia honey’s health benefits are said to be its ability to heal mouth wounds, improve lung disease symptoms and memory, heal intestinal infections, clean blood cleanser and decrease skin markings, the latter when used topically.

Hailing from the nectar of indigenous highland flowers in the Anzer plateau in Rize province, highland honey is extremely rare yet highly sought-after due to its medicinal properties for ailments such as stomach pain, swollen tonsils, hair loss, loss of memory and even varicose veins.

Turkey’s deli bal, which translates as mad honey, aka miel fou, is unfortunately infamous for its adverse effects when consumed in quantity. This unique type of honey, which should come with a warning label, is only produced in two places in the world: the Black Sea’s Kaçkar Mountains and in the foothills of the Himalayas. Its dangerous psychedelic properties are the result of a neurotoxin from the rhododendrons the bees in these two areas create the honey from. When taken in small doses, this type of honey is said to be beneficial for stomach pains, anxiety, diabetes and hypertension, but even a small spoonful could result in intoxication. When consumed in excess, this type of honey can easily lead to hallucinations, nausea, fainting, seizures, heart arrhythmia, dangerously low blood pressure levels, and at its extreme, even death.

It is believed this type of honey was in fact the first-ever chemical weapon to be used in warfare when in the Hellenistic period (97 B.C.) the Roman troops of General Pompey the Great succumbed to a trick by Pontic leader Mithridates, who had combs of mad honey strategically placed along their route as his own soldiers retreated. Taking place near what is today the Black Sea region of Trabzon, the Pontic warriors later returned to conquer the Roman soldiers, who fell ill, had become delirious and even fainted.

Did you know that Turkey just so happens to produce the world’s most expensive honey? That’s right, at 10,000 euros ($12,200) per kilo, this past February Centauri Honey was named the world’s most expensive honey by the Guinness Book of World Records. Based in the Black Sea region of Şile, Centauri Honey is harvested from a cave 2,500 meters above sea level and far from human settlements and other bee colonies. The surroundings are said to be laden with a variety of medicinal herbs, including St. John’s Wort, which has resulted in this extremely rare honey having strong medicinal properties due to its high levels of magnesium, potassium, phenols, flavonoids and antioxidants.