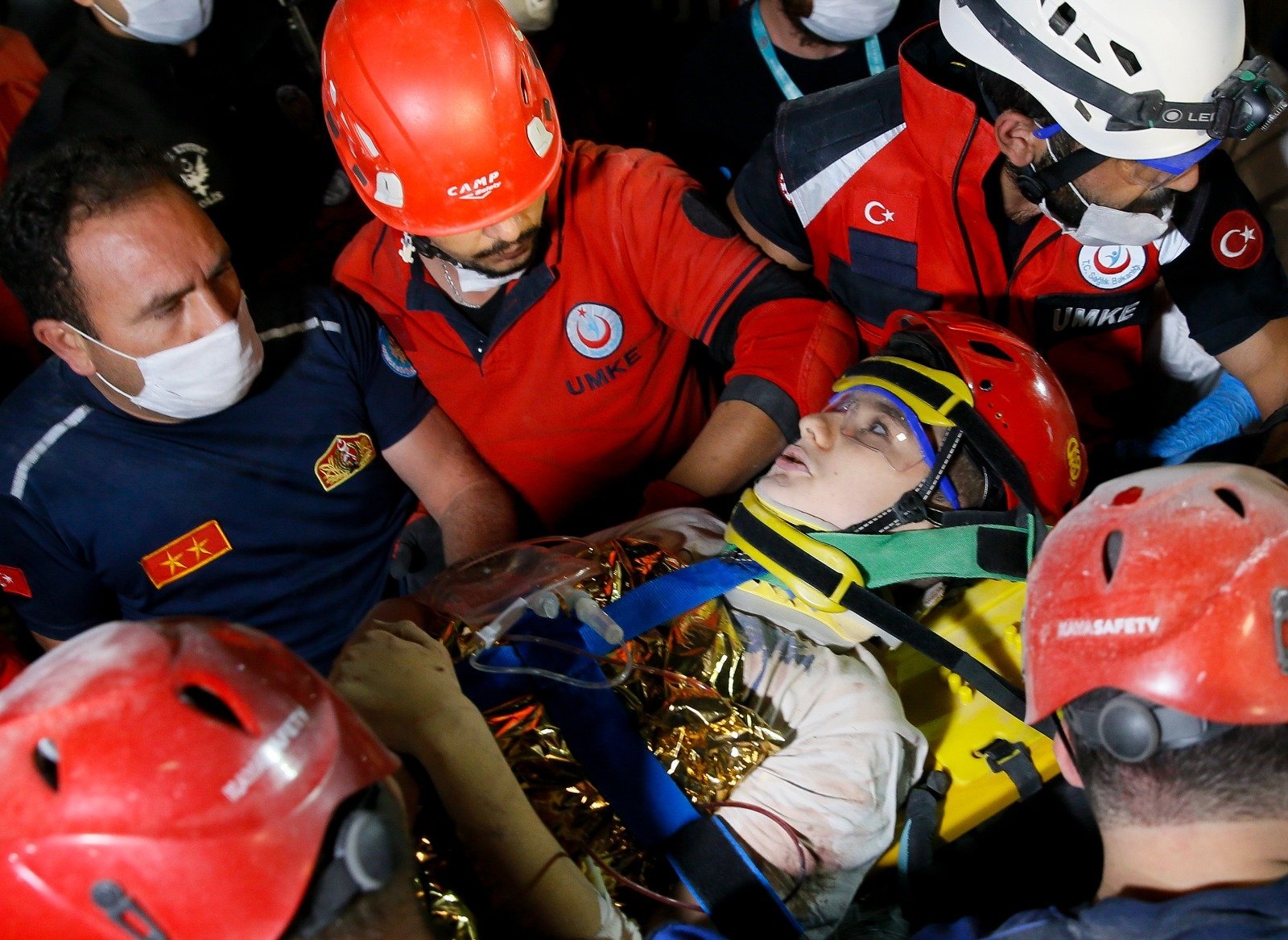 Saturday is the first anniversary of one of deadliest earthquakes in decades to hit Izmir. One year ago, Turkey’s third-largest province situated on the Aegean coast lost 117 people to a magnitude 6.6 earthquake.

The disaster was nothing unusual for a country prone to devastating earthquakes but for Izmir, it was unprecedented.

“They call it ‘sandy house’,” Fatma Aladağ says, referring to her children’s description of their former house in Izmir’s Bayraklı, the district that suffered most from the earthquake whose epicenter was off the coast of Seferihisar, which was hit by tsunami after the disaster. Aladağ spent four and a half hours under the rubble of their flat, with her three children between the ages of 2 and 4, and the 8-year-old daughter of her neighbor. All were rescued by firefighters frantically digging out the debris.

She recalled how her 4-year-old son Yusuf and 6-year-old daughter Zehra could not move even an inch for hours. “I was desperate. I tried to boost their morale by singing songs together. I found a doll among debris and gave it to my daughter to keep her occupied. I crawled under it and found another toy to give my son,” she said about her hours under the rubble to Demirören News Agency (DHA) on Friday.

The 36-year-old woman says her children are still traumatized from the incident and that in any house they have visited since the earthquake, they ask her if it has any “cracks.”

The family lost everything in their first-floor home and moved in with relatives before finding a new home. “I am grateful to be alive. We received psychiatric support after the disaster but my children have not been able to sleep well since then. They are still scared when they hear a bang or a loud noise. They are scared of hearing the noise from construction sites. I never went back to the neighborhood and wanted to move some place as far as possible from there,” she says. Aladağ counts herself lucky to be able to have had a working cellphone and for reaching the emergency teams on her first call.

“I was thinking to grab the children and flee at first when we felt first tremors but I don’t remember what happened next. Our neighbor’s daughter Merve recalled it. So, we sat on the couch and embraced each other and the ceiling fell down on us. We were trapped between the couch and a closet but this was what saved us (from death),” she recalled.

Günay Özışık is among the young survivors of the earthquake. The 16-year-old boy was also among the first to be rescued from the rubble of his flat in a seven-story building, after ten hours. Özışık underwent surgeries on his legs and spent two months at a hospital for treatment. He was bed-ridden for months before further therapy restored his health.

Now living with his grandmother in Izmir’s Kemalpaşa district, the high school student says he remembers less about earthquake than he used to. “I was always thinking that I would be rescued while I was under the rubble. I had a constant fear of death before I heard the voice of rescuers,” he told Anadolu Agency (AA) in a recent interview, “amazed” at how he spent so much time under the collapsed building.

Özışık says he barely lost hope while buried under blocks of concrete. “After I was rescued, I was scared that I would not be able to walk again. When I started walking again, I felt like a baby learning how to walk. What kept me alive has always been not losing my hope,” he says.

Today, most survivors live in temporary houses or have moved in with their relatives. On Saturday, the first batch of houses built by the state for survivors will be handed over to their owners.