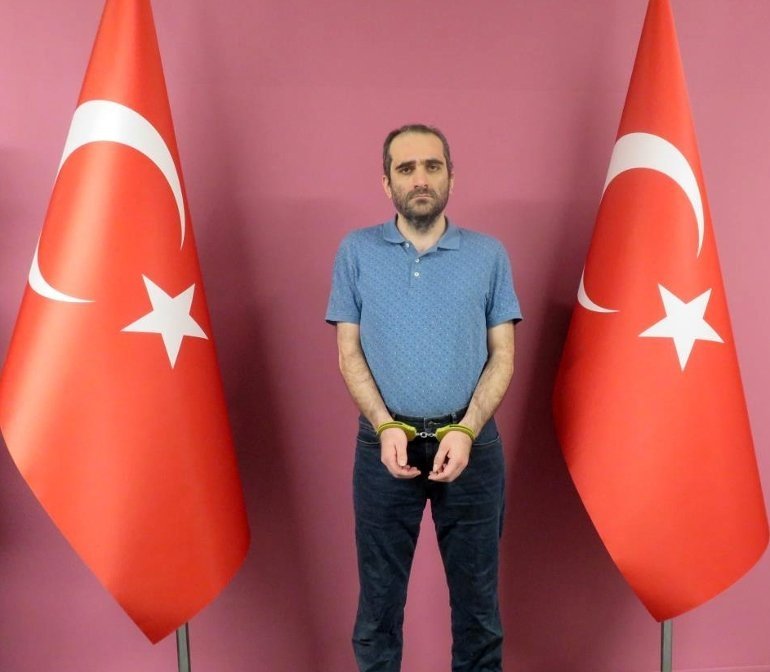 In this photo provided by the National Intelligence Organization (MIT), Selahaddin Gülen stands in handcuffs between two Turkish flags at an undisclosed location, on an unknown date. (AA Photo/via MIT)
by DAILY SABAH WITH AA Jun 04, 2021 5:54 pm
RECOMMENDED

Selahaddin Gülen, a relative of Fetullah Gülen, leader of the Gülenist Terror Group (FETÖ), was arrested on Friday on charges of "managing an armed terrorist organization" after he was captured abroad in a National Intelligence Organization (MIT) operation and brought to Turkey.

Selahaddin Gülen was brought to the court of peace on duty in the capital Ankara and formally arrested.

He is thought to be a “senior FETÖ figure” who President Recep Tayyip Erdoğan said needed to be captured in a speech on May 19. The suspect was wanted for being a member of a terrorist group. Websites linked to the group say Selahaddin Gülen was captured in Kenya, but authorities have not corroborated the claims. Some media outlets claimed he was captured in an Asian country.

Assisted by secret members of the terrorist group, Selahaddin Gülen, who works as a teacher, fled Turkey after a warrant was issued for his arrest.

Selahaddin Gülen is related to several top members of the terrorist group in addition to its ringleader, Fetullah Gülen. His brother-in-law is Cevdet Türkyolu, who works as Fetullah Gülen’s personal assistant and is one of the people closest to the terrorist leader, even staying with him at his lavish retreat in Pennsylvania in the United States.

An unknown number of top FETÖ members fled Turkey after the failed July 15, 2016 coup attempt that killed 251 people. The attempt was orchestrated by members of the terrorist group who had infiltrated the Turkish Armed Forces (TSK). Ringleader Gülen, who left Turkey in 1999 for the United States, was planning to return if the attempt succeeded. Through multiple operations carried out in the aftermath of the coup attempt, which was quelled thanks to strong public resistance, security forces have managed to apprehend a large number of Gülen's relatives, mostly his nephews, who were associated with the terrorist group.

Fetullah Gülen is wanted for a long list of charges, from running a terrorist group to attempting to carry out a coup, illegal wiretapping, blackmail and orchestrating multiple plots targeting critics of the group. But the mastermind has evaded capture despite multiple extradition requests to the United States, which Ankara argues is to delay his extradition.