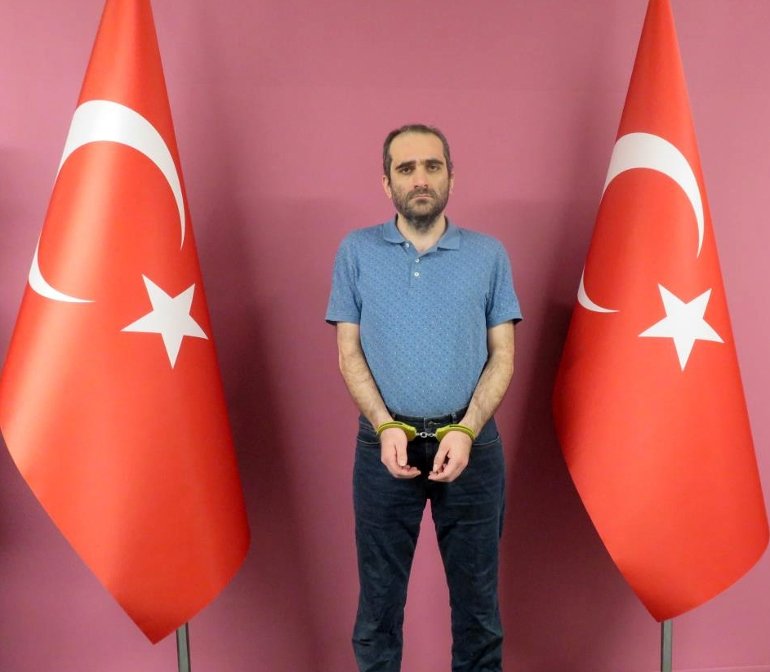 A photo of Selahaddin Gülen in handcuffs at an undisclosed location and date, provided by the National Intelligence Organization (MİT). (AA PHOTO)
by DAILY SABAH May 31, 2021 11:40 am
RECOMMENDED

Selahaddin Gülen, a relative of Fetullah Gülen, leader of the Gülenist Terror Group (FETÖ), was captured abroad in an operation by the National Intelligence Organization (MİT) and brought to Turkey, authorities announced on Monday.

Selahaddin Gülen is thought to be a “senior FETÖ figure” who President Recep Tayyip Erdoğan said needed to be captured in a speech on May 19. The suspect was wanted for being a member of a terrorist group. Websites linked to the group say Selahaddin Gülen was captured in Kenya, but authorities have not corroborated the claims.Some media outlets claimed he was captured in an Asian country.

Assisted by secret members of the terrorist group, the suspect, a teacher, fled Turkey after a warrant was issued for his arrest. Selahaddin Gülen is related to several top members of the terrorist group in addition to its ringleader, Fetullah Gülen. His brother-in-law is Cevdet Türkyolu, who works as Fetullah Gülen’s personal assistant and is one of the people closest to the terrorist leader, even staying with him at his lavish retreat in Pennsylvania in the United States. Media outlets reported Selahaddin Gülen was also wanted on a separate charge of sexual assault involving a minor.

An unknown number of top FETÖ members fled Turkey after the failed July 15, 2016 coup attempt that killed 251 people. The attempt was orchestrated by members of the terrorist group who had infiltrated the Turkish Armed Forces (TSK). Ringleader Gülen, who left Turkey in 1999 for the United States, was planning to return if the attempt succeeded. Through multiple operations carried out in the aftermath of the coup attempt, which was quelled thanks to strong public resistance, security forces have managed to apprehend a large number of Gülen's relatives, mostly his nephews, who were associated with the terrorist group. Fetullah Gülen is wanted for a long list of charges, from running a terrorist group to attempting to carry out a coup, illegal wiretapping, blackmail and orchestrating multiple plots targeting critics of the group. But the mastermind has evaded capture despite multiple extradition requests to the United States, which Ankara argues is to delay his extradition.

In addition to the United States, FETÖ members fled to Europe and many African countries when the coup attempt backfired. The terrorist group runs an international network of schools and charities, which helped it cultivate the image that it was a religious charity movement and education network for years.

The country launched an international legal struggle against FETÖ following the 2016 putsch attempt. Despite the cooperation of some allies and friendly countries, Ankara faced obstacles when attempting to extradite a large number of FETÖ suspects. The Justice Ministry has requested the extradition of more than 800 members of the terrorist group from 105 countries, including the U.S., Germany, Romania and Belgium. More than 110 FETÖ members have been extradited to Turkey from 27 countries to date. It has sought the extradition of 156 FETÖ members from the U.S. and 257 others from European Union countries. Germany leads the list of extradition requests with 77, while Turkey has also sought the extradition of 64 suspects from Greece and another 36 from Belgium. In the meantime, more FETÖ members, who have managed to hide their ties to the group are still trying to flee, to Europe in particular, through the country's border with Greece. More than 1,700 FETÖ suspects were captured trying to secretly cross the border over the past five years. Among those captured on the border are soldiers, judges, prosecutors, teachers, police officers, academics and lawyers who were dismissed from their duties on suspicion of membership to the terrorist group with lawsuits pending against them.

Thousands of people linked to the terrorist group have been detained or arrested following the coup attempt, including those actively involved in the putsch bid and those implicated in the group's other wrongdoings.