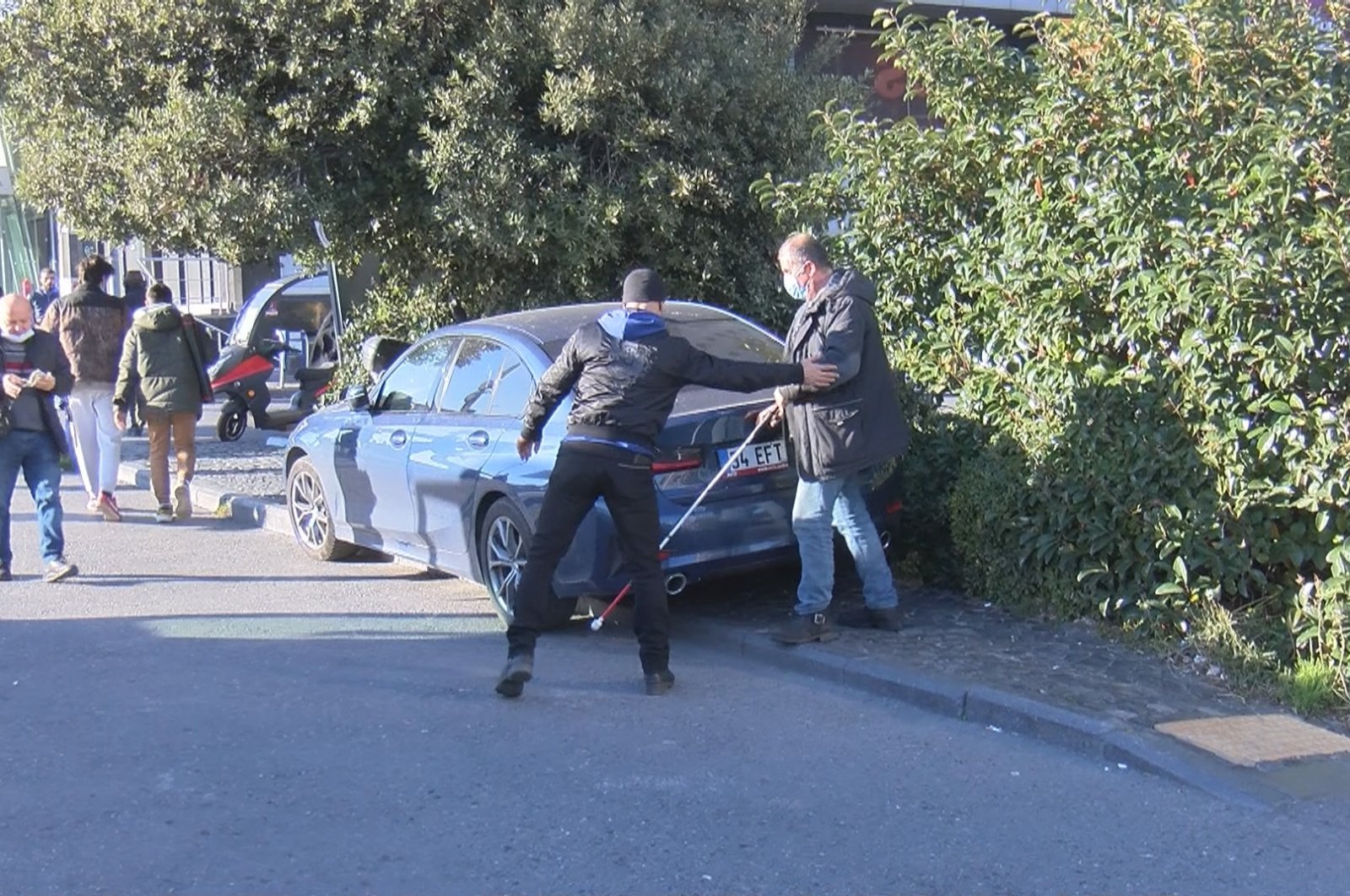 Visually impaired residents of Istanbul have to overcome the obstacles created by people without disabilities, restricting their movement even on the sidewalks, from wrongly parked cars to the absence of tactile paving

Going out without company is a genuine challenge for the visually impaired in Turkey's most populated city Istanbul. Though it is much more developed in other aspects than smaller cities of Anatolia, comprehensive accessibility for the disabled is something still lacking in Istanbul. A combination of lack of services and a public mindset that conveniently ignores the needs of the visually impaired act as a hindrance to the latter's need for socialization and even the simple task of commuting.

The challenges may be few but are enough to deter the visually impaired from going out alone. Among them is a lack of "yellow lines" or tactile paving used to guide the visually impaired walking on sidewalks or any other pedestrian-only spaces. Sidewalks are already filled with obstacles for non-disabled citizens but cars randomly and wrongly parked on them, rental e-scooters haphazardly ditched on sidewalks and other objects make a safe walk almost impossible for those with vision disabilities.

Mustafa Güler is among about 800,000 visually impaired people living in Turkey. He "guided" journalists on Friday, celebrated as the International Day of Persons With Disabilities, through the various hurdles that the visually impaired face, revealing how daunting city life can be for them. Güler, 40, born with vision impairment, took the journalists on a tour of Mecidiyeköy, one of the busiest quarters of the city's European side, and pointed out the need for caution with almost every step he took.

"Istanbul is a big city and for us, this means bigger problems. The city is not exactly suitable for the visually impaired. For instance, we have no tactile paving on lanes to the Metrobus, while all sidewalks are cluttered with advertising boards (we can bump into)," he told Demirören News Agency (DHA).

The Metrobus is the most popular means of mass transit, connecting the two sides of the city, and offers faster commute thanks to its exclusive lane. However, getting into a Metrobus is problematic if you have a visual disability. Güler says there are no barriers between the lane and the raised platform the Metrobus approaches for passengers to board. "We don't know where its doors are and since there are no barriers, we are scared to fall onto the lane," he says.

E-scooters are the latest source of concern for the disabled, whether they are wheelchair-bound or visually impaired. As their use increases in the city with the traffic worsening day by day, most users opt to park e-scooters they rent wherever convenient without thinking twice about the problem it may cause. More often than not, they are chained to electric poles sticking out of sidewalks or traffic signs, again, on the sidewalks. They block almost half of the already narrow sidewalks, causing the visually impaired to stumble and sometimes, injure themselves.

"We want designated parking spaces for e-scooters," Güler said. He also laments people parking their cars on sidewalks and urges them to "empathize" with the visually impaired.

Another urgent need for accessibility is the yellow tactile paving. "You can't go far under current circumstances. Most places with tactile paving end abruptly and you have to rely on your walking stick, bumping into obstacles along the way. Yellow lines are only available in main streets and you cannot find them elsewhere," Güler says.

For the disabled, the lack of wheelchair ramps and elevators poses another problem across the city. Though most mass transit stops have at least an elevator, some, like a busy Metrobus station in the Merter quarter, do not have an elevator, nor ramps. Only disabled individuals who use crutches instead of wheelchairs can climb to the station using the stairs, which can be a tiring experience.

"I use the stairs all the time and cannot comprehend why they do not install an elevator here," Samuray Çolakoğlu, a disabled woman, says.