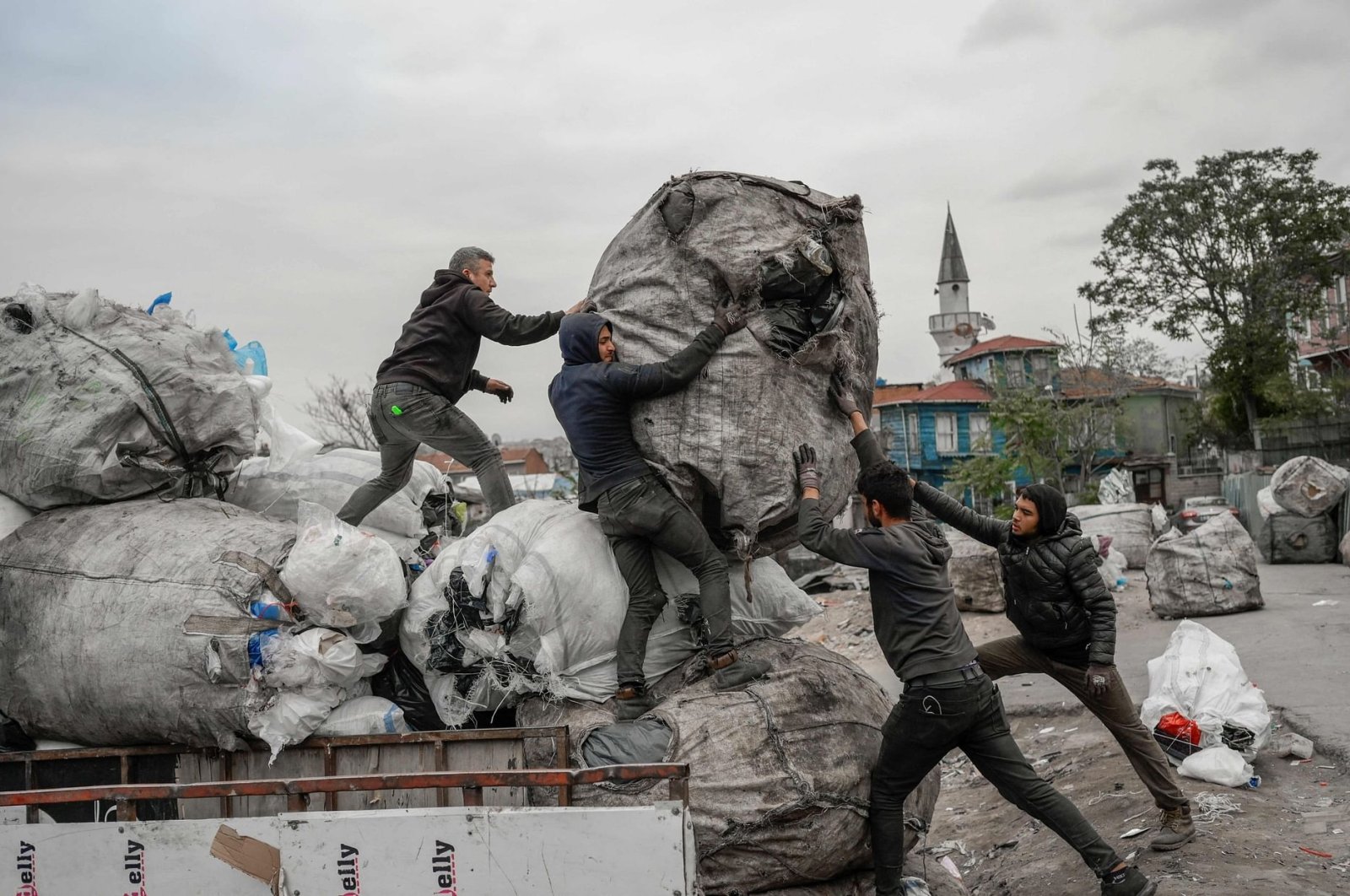 Shrouded by acrid smoke, a young Afghan crouches while sorting the waste he has pulled from the trash bins of Istanbul, anxious that Turkey will soon strip him of even this subsistence.

"I start at eight in the morning and finish at eight at night," said Issam Raffur, who has spent four of his 20 years in Turkey.

"It is very hard and poorly paid, but I have no choice," he shrugged, smoke billowing from a fire barely warming his makeshift sorting center on a soggy winter day.

Considered the poorest of Turkey's poor, Afghans, like other undocumented "illegal migrants," have been doing work others snub.

For less than $10 (TL 140) a day, they roam the streets of Istanbul, a megalopolis of nearly 20 million people straining under the weight of a currency crisis and a flood of refugees from Syria, Afghanistan and other conflict-riven states.

Diving headfirst into dumpsters, they dig up plastic bottles, glass and other waste they then sort and sell in bulk – a self-organized, unregulated business that keeps the city clean and men such as Issam fed.

But as public sentiment turns against migrants and other foreigners in Turkey, Istanbul's municipality has declared this work bad for "the environment and public health."

Issam and his friends suspect that what Turkish officials really want is to put this potentially profitable business under the control of a few, well-connected recycling firms.

"If the big companies take over, they will saw off our last branch of support," said Mahmut Aytar, a Turk who manages one of the small recycling centers on the Asian side of Istanbul. "They will throw us in the ravine."

"Waste can be bought and sold, so we have started to view it as a raw material with other uses," he said. "After the price of raw materials increased, the value of recycled goods has risen."

Born in multiethnic southeastern Turkey, Aytar, 28, launched his recycling business out of desperation after failing to find work befitting his biology degree.

"This job does not require experience or training. Anyone can do it, but it is mostly the people excluded by the system who get involved," he said while watching his press machines crush plastic bags and empty bottles.

After being shrunk into tidy bales, the plastic waste is loaded onto trucks of small, independently run recycling operators who convert them into granules.

Aytar said he runs one of 2,500 or so impromptu recycling depots in Istanbul, receiving dozens of trash collectors – called "çekçekçi" (pronounced "chekchekchi" and roughly translating as those who pull carts) – every day.

Women and minors specialize in cardboard boxes, which they find after the shops close at night, their babies sometimes riding along in the carts' lower folds.

Each kilogram (2.2 pounds) of waste is worth about a lira, and the bravest collect about 150 kilograms of waste a day.

"They probably don't realize it, but by being impoverished, they contribute to protecting the environment," said Aytar. "They are helping society."

They do so while living in destitution and depend on the whims of the police.

In early October, security forces rounded up more than 250 "çekçekçiler" in one day, releasing them after a few hours but keeping their precious cargos of waste.

"Each confiscation costs me about TL 560, which I earn in three days," Elrem Yaşar, who started managing his own depot after collecting trash for 12 years, complained.

On condition of anonymity, one official told AFP that "çekçekçiler" work illegally. "It is up to the city to take care of recycling and to collect revenues from it."

Conceding that his work has no legal status, collector Ekrem Yaşar said he would be happy to pay taxes if ever given the chance.

"We are not asking for state handouts, but if they take away our jobs, tens of thousands of people will be left with nothing," he said, pinning his hopes on the first çekçekçi union, which is still in the process of being set up.

Most of the trash collectors and warehouse workers live on-site in crudely arranged containers, huddling around open fires in Istanbul's industrial zones.

"Imagine, life in the city," Yaşar said with a bitter laugh. "You think we are making money? Look, we only have one teaspoon between us," he said while serving tea.