Overfishing blamed for invasion of jellyfish in Bosporus 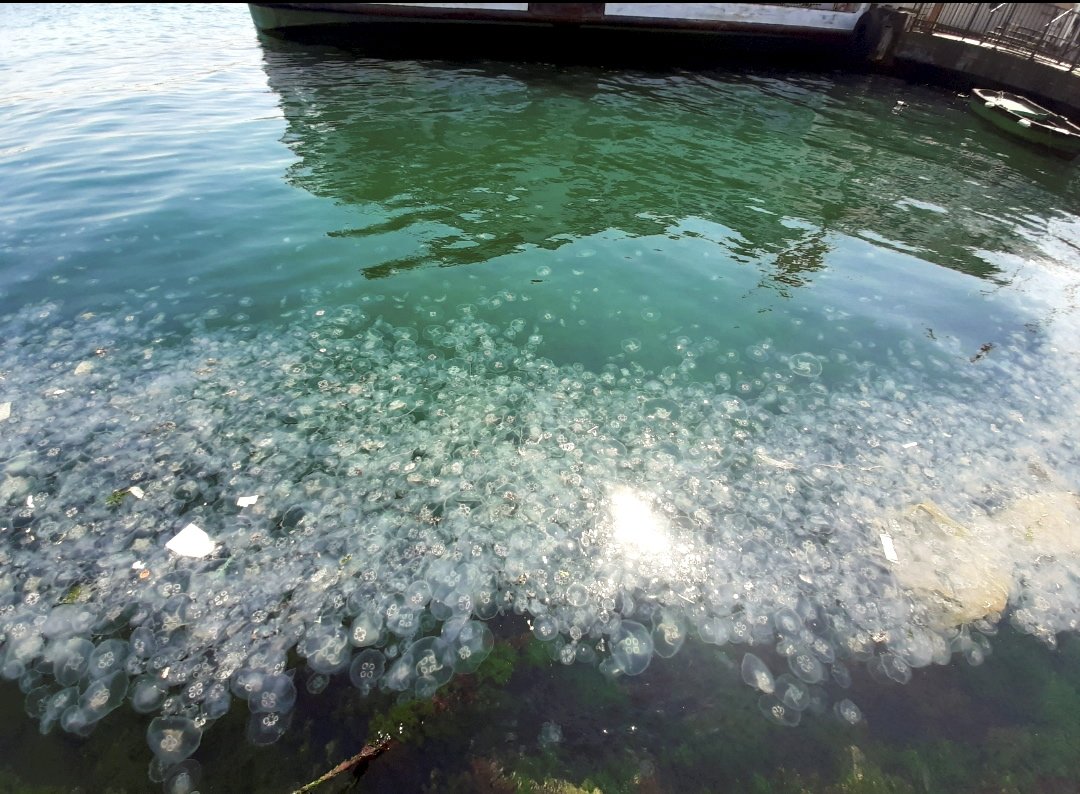 The changing ecosystem due to overfishing in the Bosporus in Istanbul caused the recent invasion of jellyfish, experts said Tuesday.

Speaking to Demirören News Agency (DHA), Melek İşinibilir Okyar, an academic from Istanbul University, said that the number of some fish species which feed with jellyfish has decreased due to overfishing.

“For example, there is a very little number of mackerel fish left in the Marmara Sea, which feeds on jellyfish, due to overfishing. Or sprat fish, which also feeds on jellyfish. When you remove these species out of the ecosystem, the entire ecology evolves for the benefit of the jellyfish. Because there is no living creature in Bosporus to compete on it for survival. That's why their number started to increase,” she said.

Okyar said that the jellyfish invasion is not a recent development or something that was triggered by the plastic problem, but a result of decades-long of wrong practices.

In Istanbul, specifically, the coasts of Arnavutköy, Ortaköy and Bebek neighborhoods turned white with an excessive number of jellyfish. The density of the species is also visible from the air. The fishermen are having trouble with the abundance of jellyfish, saying that it is not possible to fish. The residents of these neighborhoods also complain about visual pollution.

Okyar underlined that all institutions should come together and show joint efforts to find a permanent solution to the issue.

“Local governments, ministries, universities need to work together. There could not be a resolution developed by a single institution. We will come together and present our research results. Then, we need to create a road-map by raising awareness of both fishermen and people living around these areas. We can develop such rescue program for the entire Marmara Sea,” the academic said.

Mehmet Sarıyıldız, who has been fishing in the Bosporus for years, also grumbles about the extreme number of jellyfish. “This is probably the result of massive pollution. This year, the number of jellyfish is too much compared to other years. And it affected us,” he said.

Many other fishermen also complained about jellyfish invasion.

Experts previously issued similar warnings regarding the rise in the number of jellyfish in the Turkish seas.

Since the 2016 opening of an expansion to the Suez Canal, more invasive species have started emerging in Turkish waters. The expansion, along with an increase in seawater temperatures and maritime traffic, as well as other factors, took its toll on the ecosystem. Scientists say a large number of nonindigenous species in the Mediterranean Sea arrived after the opening of the canal in the 19th century, and a new wave of invasive species has now been seen since the expansion.

Overfishing has not only caused the increasing number of jellyfish, but it also threatens dolphins in the Bosporus.

It was revealed that fishing nets caused the deaths of 3 dolphins in the Bosporus in one day, which were the Delphinus species, and known to be endangered.

Arda M. Tonay from Istanbul University told Anadolu Agency (AA) that they examined the three adult male dolphins, noting that the reason for their death was drowning in a net due to people fishing.

“The Black Sea population of this Delphinus species is vulnerable, while the Mediterranean population is endangered and generally live offshore. In the Bosphorus, they are observed during the pelagic fish migration. Therefore, while they rarely interact with coastal fishers, their deaths are mostly observed in hunting with surrounding nets,” he said.

Tonay stressed that these species are an important part of the ecosystem and their population has been under protection since 1983, according to the Fisheries Act and international treaties of which Turkey is apart of.

“We want the implementation of legal sanctions to those who are responsible to death of Delphinus, which are under international protection. Every boat hunting with surrounding nets during Feb. 21 night and Feb. 22 morning is under suspicion. We ask our citizens and fishermen who have information about this case to report to our foundation. Also, industrial fishing should be restricted as soon as possible around the Bosporus, which is a very important migration route,” he said.