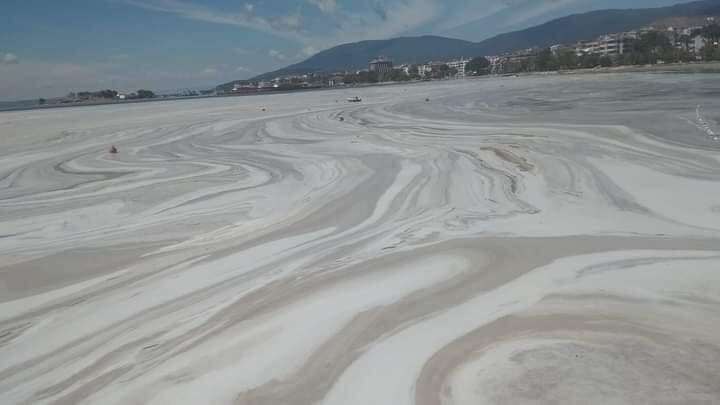 The surface of the sea near Erdek in the western Turkish city of Balıkesir has been covered in a thick jelly-like layer of slime. In response, citizens have demanded an urgent solution after the footage of sea snot – or mucilage, a thick layer of viscous fluid that has been spreading across the Marmara Sea for months – went viral.

Photographer Özcan Yüksek captured the coastline covered with mucilage and shared it on his Twitter account saying, “The view of the sea in Erdek. Unfortunately!" After it was posted, a deputy from an opposition party reshared it.

"The Sea of ​​Marmara cannot breathe through sea snot. The Marmara Sea is the world's geographical treasure, the world's only inland sea, where three-quarters of Turkey's population and 40% of its industry are located. The situation is dire and the government still ignores the problem. What are you waiting for?" he tweeted.

Havutça's post, a number of people online shared their concerns on the problem threatening Turkey's seas.

Sea snot is a jelly-like substance formed by the excessive proliferation of microscopic plants called phytoplankton, which enables biological life in the sea.

Climate change, which led to Turkey's milder-than-usual winter and caused one of the worst years for weather-related disasters, still weighs heavier than pollution for the phenomenon. Phytoplankton, which thrives in warmer water, is among the mucilage actors in the Marmara, where temperatures are several degrees higher than normal.

Seawater temperatures already dealt a blow to fishermen looking for hamsi, a type of Turkish anchovy, and the sea snot may be the next disaster – though they are not without blame too. Some experts link overfishing to the unbridled growth of phytoplankton, thanks to the absence of natural predators.