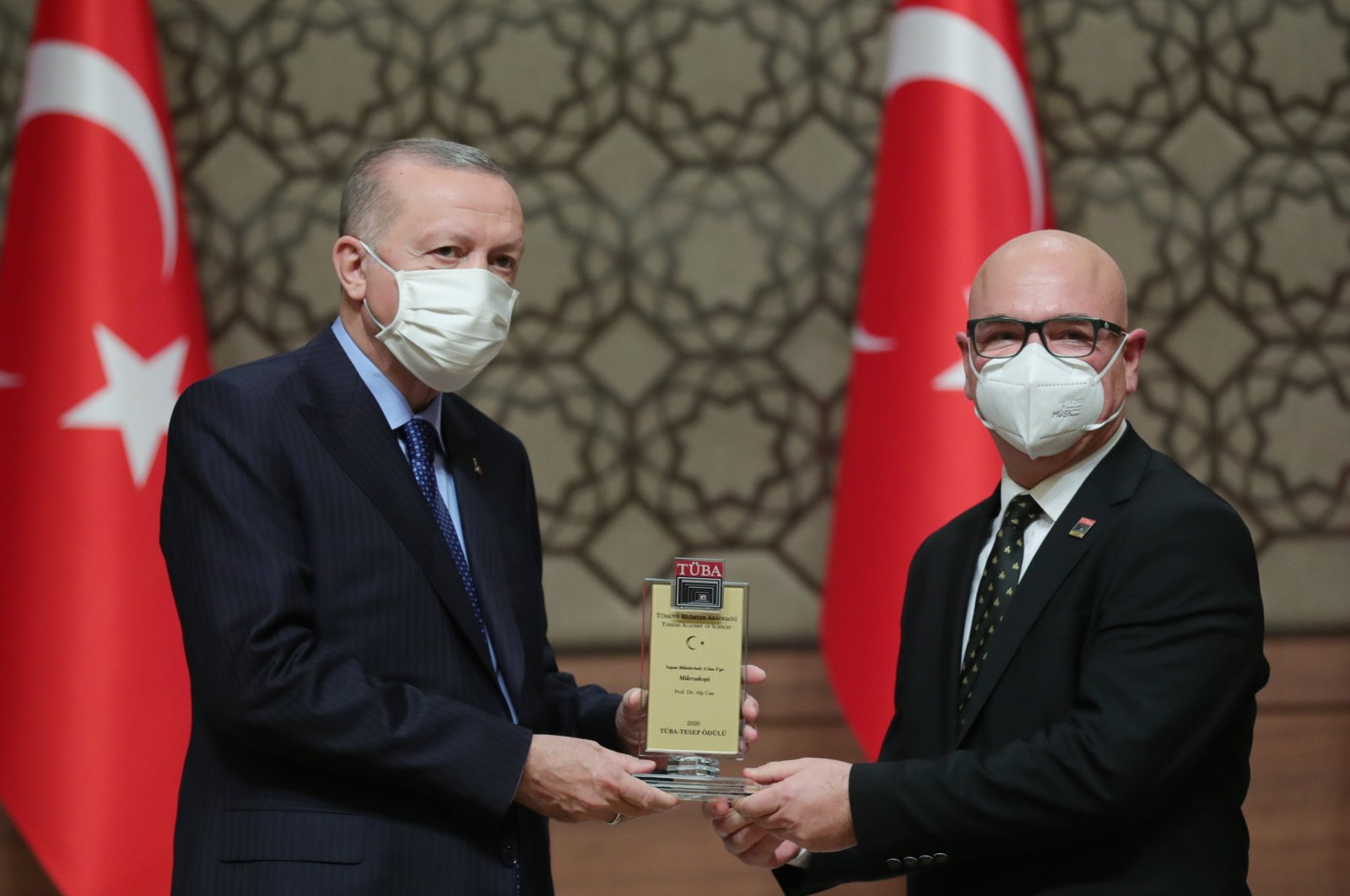 Accomplished, up-and-coming scientists were recognized at an awards ceremony held at the Presidential Complex in the capital Ankara Thursday. President Recep Tayyip Erdoğan hosted the ceremony organized by the prestigious Scientific and Technological Research Council of Turkey (TÜBITAK) and the Turkish Academy of Sciences (TÜBA).

The awards, which are viewed as Turkey’s own Nobel prize, aim to encourage the thriving science community in the country, in fields ranging from social sciences to health and engineering.

“Turkey’s accomplishments in the past 18 years are thanks to recognizing knowledge and science. Scientists are undoubtedly the most important architects of this success with their sacrifice of time to create added value for their nation and humanity, along with parents who devote themselves to the education of their children. Every new study or project you undertake demonstrates Turkey’s strength in the sciences. We are trying to support every scientist discovering, researching and producing,” Erdoğan said at the awards ceremony.

The president also praised scientists’ efforts in the fight against the coronavirus. "Three innovative (Turkish) vaccine candidates are on the verge of starting phase studies. Work by our professors has the potential to become the third vaccine candidate in the clinical stage in its category in the world," he said. The president noted that TÜBITAK set up a platform for the fight against COVID-19 and 436 researchers were working on 17 projects for vaccine and drug development.

Along with the awards, each scientist is given a research grant for studies in their fields.

This year’s recipients of TÜBITAK awards were professors Mustafa Soylak and Ismail Türkan in the Basic Sciences category, and professors Özgür Barış Akan and Hilmi Volkan Demir in the engineering sciences category. Soylak received the award for his work in the field of chemistry, while Türkan is recognized for his international botanical studies. Akan was awarded for his work on communications theory and the Internet of Things (IoT). Demir was recognized for his work on semiconductor nanocrystal optoelectronics.

Incentive Awards were also handed down to 13 scientists, while professor Cengiz Sinan Özkan was given the TÜBITAK Special Award.

Jeppesen, a Danish professor, is currently working on the impact of climate change in saltwater ecosystems at Middle East Technical University's (METU) department of biology as part of the International Leader Researchers grant program of TÜBITAK that invites Turkish and foreign scientists abroad to work at the country's universities.

Kaynak, a mechatronics researcher, serves as emeritus professor at Boğaziçi University in Istanbul. Palestinian professor Hallaq, who works at Columbia University in the U.S. and is a leading scholar in the field of Islamic legal studies, was recognized for his studies on Islamic law. Günel was recognized as a leading authority in carotid artery and gamma knife surgery.