Marriages, divorces on the decline in Turkey, pandemic to blame 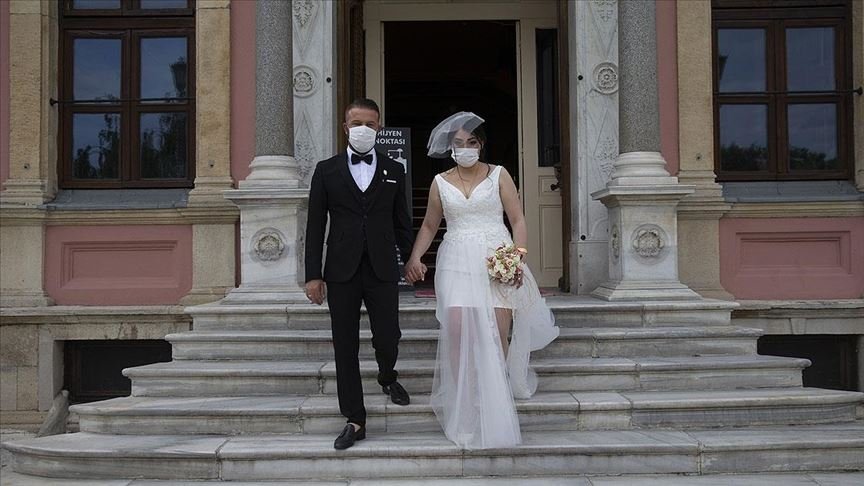 Figures from 2020 published Thursday indicate a drop in marriages and divorces, with the lowest rates recorded in the first months of the COVID-19 pandemic that disrupted daily life in the country

The Turkish Statistics Institute (TurkStat) on Thursday released the 2020 figures for marriages and divorces in the country. The figures show the number of couples who got married in 2020 decreased by 10.1% and similarly, the number of couples who got divorced decreased by 13.8%. The coronavirus pandemic, which prompted many couples to postpone their weddings but also forced many dysfunctional couples to spend more time together, appears to have played a role in the decline.

In fact, the most significant drop in marriages and divorces was recorded in April and May, one or two months after the virus made its foray into the country. The marriage rate dropped by more than 68% in April 2020, compared to April 2019. In May, it decreased 61.6% compared to May 2019, a drop which is also linked to the Muslim holy month of Ramadan, a period when marriage ceremonies are largely shunned. The pandemic caused many to postpone their wedding parties, an inseparable part of marriages in the country, as wedding halls were shut down or forced to operate on a limited capacity. Divorces in April and May decreased by more than 96%. A judicial holiday in August also affected the number of divorces which decreased that month.

Kafalı said the circumstances the pandemic created also sparked problems couples may have thought they resolved. "We see divorce rates increase in many countries compared to previous years. It is inevitable for couples to have problems during this tiring and stressful process. But they should not ignore their problems and should not immediately resort to divorce when they faced problems," he says. Kafalı recommends couples’ therapy for couples with problems, to enhance their communication skills.

Statistics also show an increase in the mean age of those getting married for the first time in both men and women. Men usually marry at 27 while women marry at 25. The age difference between couples stood at about three years, according to 2020 figures.

The highest marriage rate was recorded in the eastern province of Adıyaman, where roughly seven couples married per 1,000 people. It was followed by Şanlıurfa and Kilis, in southeastern and southern Turkey respectively. Gümüşhane in the Black Sea region had the lowest marriage rate, ahead of Tunceli in the east and Artvin in the northeast.

According to statistics, more than 35% of divorces took place within the first five years of marriage. Divorces also dealt a blow to children. Last year alone, 124,742 children were placed into the custody of their mother or father after their parents divorced. Mothers got custody of the children in the majority of cases.

The decline in marriage rates and the rise in divorce rates has been a continuing trend in recent years. Various factors have been identified to explain the shift, including a change from a consumption-based lifestyle, a change in social morals and amendments that have helped facilitate the divorce process. The government, meanwhile, seeks to promote marriages and children by offering incentives to newlywed couples and couples with children.

As Dr. Kafalı pointed out, marriages were on the decline across the world. In Japan, for instance, the number of marriages tumbled last year, the country’s Health Ministry announced on Monday. In 2020, marriage rates dropped by 12.7%, the highest since 1950. In Italy, official statistics show that number of people married in the first quarter of 2020 dropped by 20% compared to 2019. They further decreased by 80% in the second quarter and divorces also dropped by 60% in the same period.