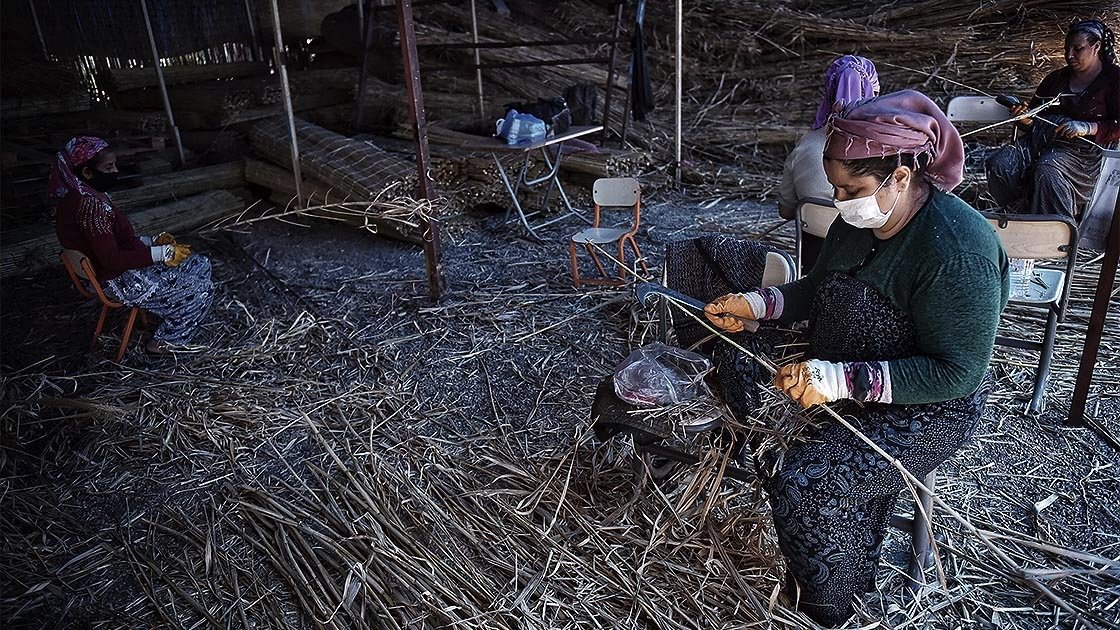 The ongoing coronavirus pandemic has made the daily lives of millions more difficult, but vulnerable communities, like the Roma, are even more susceptible to both its direct and indirect impact. As they prepare to mark International Roma Day on Thursday, a representative of the community, which has been part of Turkish society for centuries, shared their concerns over their welfare.

International Roma Day celebrates Roma culture and raises awareness of the difficulties the Roma people face. The occasion was first declared at the World Roma Congress of the International Roma Union to honor the First World Roma Congress held in Britain 50 years ago. The coronavirus pandemic has all but wiped away the achievements of the Roma people over the last decade, according to Arus. "Roma society, which constitutes the poorest and most vulnerable population, has been hardest hit by the epidemic,” she added. "Under pandemic conditions, poverty has now reached the level of fighting off hunger,” she explained. "The number of families who do not even have access to basic food has risen.”

Distance education in effect deprived Roma children of learning, Arus said, explaining that families who struggle to even put food on the table, cannot dream of accessing the internet and computers needed for their children's education. "Unemployment, disconnection from education, and problems accessing food have deepened the trauma in society,” she explained. "Dependence on social benefits increased,” according to Arus. "But accessing them was also a problem,” she added, due to the complexity of the procedures required for benefits and a lack of information on the issue. As aid is usually distributed through an address-based system, she explained, families who lack addresses as they live in tents are unable to receive aid.

According to Arus, there are an estimated 3 million to 5 million Roma people in Turkey. "There is no systematic opposition against Roma people in Turkey, but in practice, ongoing discrimination from individual people is felt very much," she said, adding that especially during the pandemic, this discrimination reared its ugly head even more. "With the pandemic, Roma groups struggling with access to basic rights and struggling with poverty reached deeper poverty and lack of access,” she added.

In 2016, Turkey announced an action plan as part of the government's Roma Initiative to improve the living conditions of local Roma people. Phase two of the action plan – expected to continue through this year – covering education, health, employment, housing and social services was published in 2019 in the government's Official Gazette. Under the plan, the Family, Labor and Social Services Ministry has carried out several projects since 2016 to improve the living standards of the Roma community in Turkey. According to Arus, the Roma initiative dates back to 2010 and "after this process, an awareness of identity emerged.” "It had a positive psychological effect at that time,” she explained. "A rapid organization process started with the Roma initiative,” she said, adding, "Many Roma non-governmental organizations were established after this period and started to work actively.”

Citing the Turkish government's two action plans published in 2016 and 2019, Arus said, "The strategy documents are very valuable, as they are binding documents that can create a road map for public institutions.” Underlining that public officials also have responsibilities under this document, she added, "The main demand of Roma groups is to end deprivation and poverty stemming from discrimination and exclusion.” "They have difficulty accessing basic rights such as education, employment, housing and health,” she said, adding that due to the coronavirus, this inaccessibility has grown even more daunting. "For this, the action plan prepared by the government must be followed,” Arus said.

Cemal Bekle, one of two Roma lawmakers in Parliament, says Turkey should recognize International Roma Day as well and he presented a draft bill for this purpose this week. Bekle told AA that the community has faced racism and discrimination around the world since the two world wars. He said the biggest tragedy they faced was the massacre in Nazi Germany during World War II. “They were subject to torture and killed in gas chambers. Survivors scattered all across Europe after the war but they were ostracized, insulted and were subject to racism in the countries they traveled,” he said.

“This patriotic, ancient community of Turkey, which has coexisted with others since the Seljuk era, should be given a gift in the form of recognition of this day. This should be a day when the social problems of the community are discussed and solutions are found, a day when their cultural traditions are demonstrated to help those traditions survive,” he said.