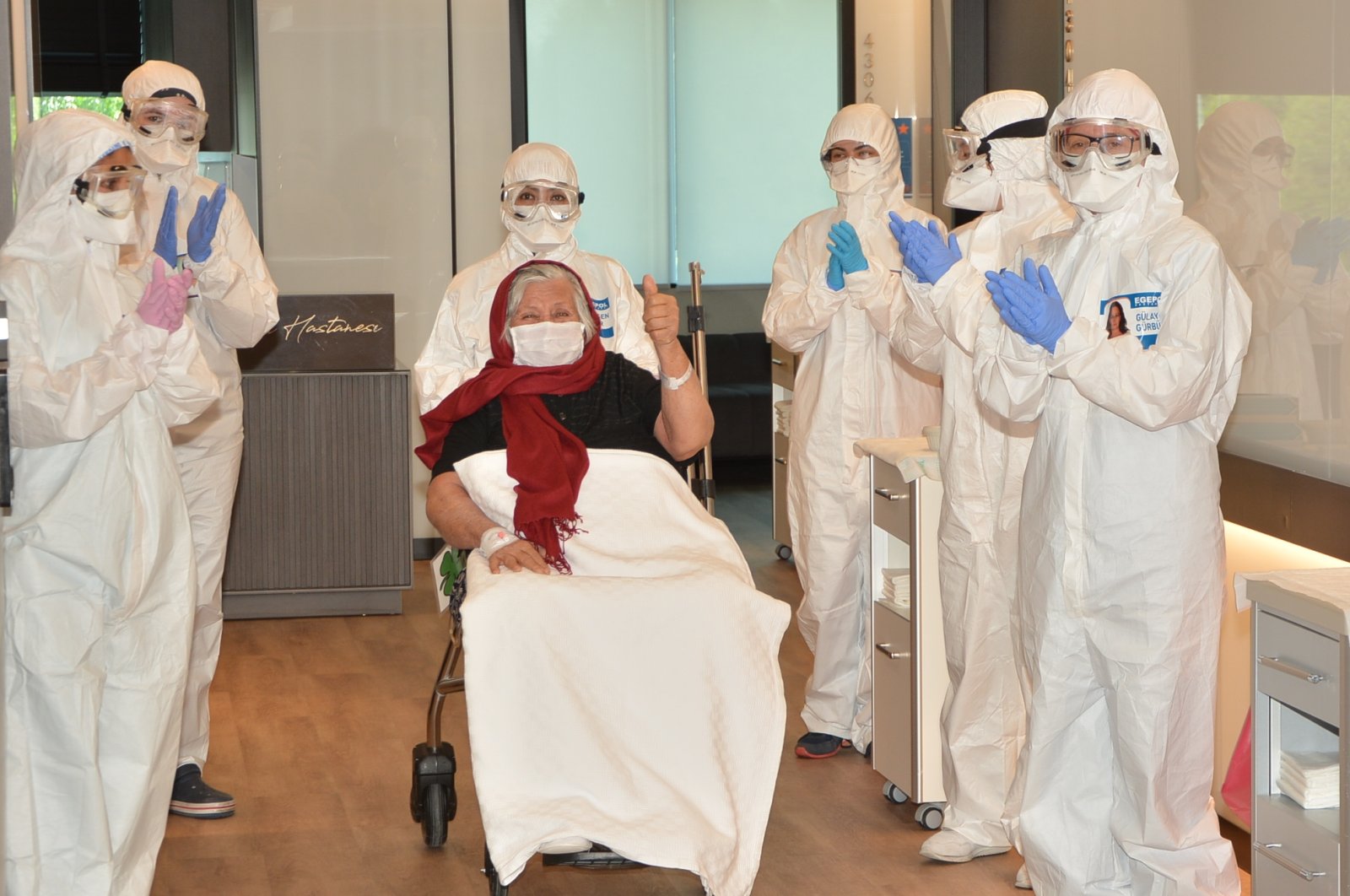 Ninety-year-old Mukaddes Adıyaman gives a thumbs-up as she leaves the hospital amid applause from the staff after beating COVID-19, in İzmir, Turkey, May 6, 2020. (AA Photo)
by DAILY SABAH WITH AGENCIES May 06, 2020 2:22 pm

City hospitals are on the front line in the fight against the COVID-19 pandemic. Negative pressure rooms that stop the virus from spreading through hospitals have given the country an upper hand in the struggle to control the virus

Turkey has managed to decrease the number of coronavirus cases over the course of around two months, with the dedication shown by the country's health care staff playing a key role in the fight to combat the pandemic. A robust health care system accessible to the entire population, as well as well-equipped hospitals have been counted as some of the game-changing weapons in Turkey’s arsenal.

Negative pressure rooms, available in all city hospitals, are also an important factor to stop more infections. The rooms, which cleanse the virus-riddled air of hospital wards, stop the virus from infecting people outside the area a coronavirus patient is being treated. Beyond preventing further infection, the rooms are also a gift for hospital staff, as they do not have to wear cumbersome protective suits. Turkish health care workers can work in shared spaces in intensive care units with their regular uniforms, donning the suit only when entering a COVID-19 patient’s room. Meanwhile, their counterparts in other countries have to work up to 10 hours without removing their personal protective equipment.

The country's hospitals are able to convert regular treatment rooms into negative pressure rooms – also known as airborne infection isolation rooms – that vacuum air from outside, ejecting it back in. Thanks to a special ventilation system, more air from the room is removed than that allowed in. The special ventilation system can be installed in all hospital units, from intensive care to surgery rooms to isolated COVID-19 patients.

Turkish health care, armed with a pandemic preparedness plan issued long before the outbreak emerged in the region, has been hailed by experts for offering a good, timely response to the pandemic. Turkey also boasts an intensive care unit bed capacity that is the largest in Europe, with 40 beds per 100,000 people.

Recently, the country started unveiling new hospitals whose construction was accelerated to help combat the outbreak. Last month, the Başakşehir City Hospital in Istanbul was partially opened to serve as a pandemic hospital while construction of two new hospitals in the city, each with a 2,000-bed capacity, was launched last month. The construction is expected to wrap up in 45 days. Also in March, authorities unveiled a new hospital in the city’s Okmeydanı district with more than 600 beds and 99 high-tech intensive care units,

As the pandemic worsened around the world, Turkey has mobilized every hospital in the country to cope with the mounting number of cases. City hospitals, with their large capacities, have been at the forefront of efforts to respond to the growing number of patients.

The city hospital project is part of the government’s ambition to increase bed capacity and address a shortage of doctors in cities with a high population density. They are mainly located in suburban areas and operated with a private-public partnership model. Ten city hospitals have been established across Turkey so far, with an investment of more than $5 billion.

Sancaktepe Şehit professor İlhan Varank of the Istanbul Training and Research Hospital is among those facilities turning to negative pressure rooms to further stem the tide of the virus. The pandemic hospital admitting the greatest number of patients in Istanbul, the facility is staffed with 1,900 personnel working day and night and has converted a significant number of areas, including 16 surgery rooms and 75 intensive care beds, into negative pressure rooms. The rooms offer a relief for the staff of the hospital, which has admitted nearly 60,000 patients since March, including about 11,000 suspected coronavirus cases. Along with handling a barrage of COVID-19 patients, staff have continued to carry out surgeries, including on those suspected of having the virus. So far, about 300 patients, suffering from other diseases have been operated on.

Assistant professor Nurettin Yiyit, chief physician of the hospital, told Demirören News Agency (DHA) on Wednesday that Turkey’s health care improvements over the past decade and improved physical conditions of hospitals have provided the country with the strength to combat the pandemic. “We were largely able to place patients in isolated rooms. We had 75 intensive care unit beds and were well-prepared to cope with pandemic as we converted them to isolated rooms, negative pressure rooms. This prevented patients from infecting each other and hospital staff,” he said.

Şahin Tanrıverdi, the nurse in charge of sterilization at the hospital, said they had installed HEPA filters to "remove" the air of each room twelve times in one hour. “Filters help to block bacteria and virus particles larger than 0.3 microns. Those smaller than this are inactivated via the oxidation method,” he said.

Professor Nurten Bakan, head of the intensive care anesthesiology clinic at the hospital, said the outbreak had “changed a lot” for them in terms of surgery. “Now, we have to check the medical history of every patient scheduled to be operated on, to examine them against coronavirus. Surgery rooms are viewed as the cleanest places in hospitals, but we treat them as contaminated spaces now, while the preparation room, in which we wear PPEs (personal protective equipment) is regarded as ‘clean’ space,” she said. Bakan said they essentially divided the floors with surgery rooms into two – one for positive cases and one for negative cases, with those admitted and discharged seen separately. The coronavirus has put a negative burden on medical staff in terms of carrying out surgeries. Bakan said that in addition to standard scrubs and masks, staff now had to wear PPEs that severely limit their movement and breathing, all while they operate on patients for hours.

Daily deaths drop
Turkey’s coronavirus death toll has reached 3,520 with 59 new fatalities, while the number of recovered patients hit 73,285 with 1,832 new releases, the health minister said on Tuesday.
Sharing the pandemic's daily updates on his Twitter account, Health Minister Fahrettin Koca expressed that the number of intensive care patients keeps falling, while the number of recovered cases is on the rise, which shows the measures against the outbreak are proving successful.
According to the latest figures, there are 1,338 intensive care patients in Turkey and 5,119 people have recovered from the virus over the past 24 hours.
In the same period, over 33,283 additional tests were conducted for a total exceeding 1.2 million. Some 707 patients remain intubated.
On Wednesday, a 92-year-old woman suffering from the coronavirus was successfully treated and got discharged from a hospital with health staff giving her applaud.
Mukaddes Adıyaman was admitted to the Egepol Hospital in the western city of İzmir on April 14 with symptoms including fever and a persistent cough and was diagnosed with COVID-19.
Following an intense treatment process, Adıyaman was discharged. She said the diagnosis of the virus was a source of panic for her in the beginning, but she was relieved by the medical staff's meticulous care.
Dr. Hasan Murat Çelik, the chief physician of the hospital, said all public and state hospitals in Turkey joined forces in an effort to battle the virus, adding the country has so far been dealing with the pandemic effectively. "We see the number of our cases and fatality ratio are in decline," Çelik said, noting that the medical equipment and manpower in the country made it capable of surviving this period.