Ramadan in Yemen: Turkish charities reach out with food aid 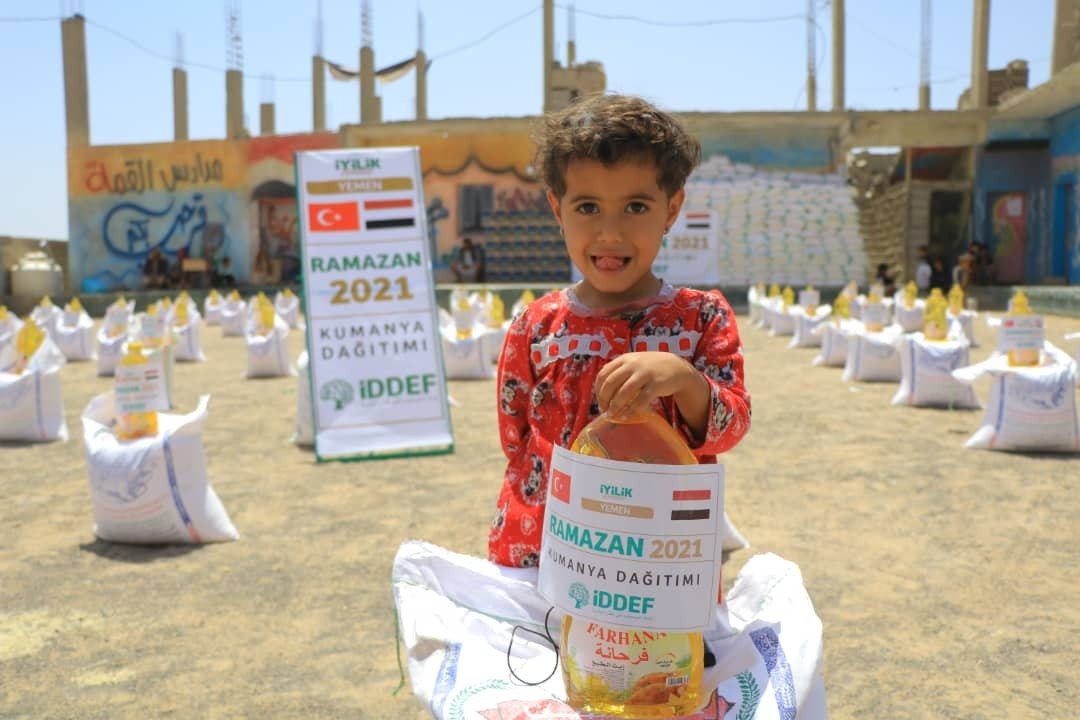 As conflict-ridden Yemen grapples with one of the world's worst humanitarian disasters, Turkish charities use the occasion of the Islamic month of Ramadan to deliver aid to the needy

The six years of conflict have been felt all across Yemen and images of emaciated children amid an ongoing famine in some parts of the country have etched themselves in the memories of millions. Ramadan, an Islamic month of fasting, thus, is more meaningful for a population partially relying on humanitarian aid, especially since food prices have dramatically increased.

The month is the occasion when nonprofit Turkish organizations begin massive aid campaigns to address the needs of disadvantaged communities worldwide.

Food insecurity and malnutrition are still the most severe problems faced by many in the war-torn nation. The Integrated Food Security Phase Classification initiative said the number of people who will face high levels of acute food insecurity in Yemen in 2021 increased to 16.2 million, rising nearly 3 million compared to an October-December 2020 estimation of 13.5 million, according to its latest report published on April 16. That includes 5 million who are one step from being declared in a "famine" and nearly 50,000 who have already faced famine-like conditions in the first months of 2021.

Turkish charity organizations have stepped in and increased aid activities during Ramadan to reduce the alarming level of food insecurity and nutrition.

"During the month of Ramadan, the activities of local and international charitable organizations increase. Humanitarian initiatives also execute some aid programs, and local businesspeople provide a lot of humanitarian aid during Ramadan as well," Mohammed Alsoudi, adviser to the chairman of the Higher Relief Committee in Yemen, told Anadolu Agency (AA). "There is a good number of Turkish aid organizations working in Yemen, including large organizations such as the Turkish Red Crescent (Kızılay), the Turkish Cooperation and Coordination Agency (TIKA), the Turkish Diyanet Foundation (TDV) and the Humanitarian Aid Foundation (IHH). There are also small aid associations that work on small-scale projects," he added.

The Turkish Red Crescent announced that its 2021 Ramadan program is targeting 80 million people in need in 18 countries, including Afghanistan, Azerbaijan, Bangladesh, Bosnia-Herzegovina, Bulgaria, Indonesia, the Palestinian territories, South Sudan, Iraq, the Turkish Republic of Northern Cyprus (TRNC), Kosovo, North Macedonia, Pakistan, Senegal, Somalia, Sudan, Syria and Yemen. The Turkish Red Crescent will deliver 102,000 food packages to 612,000 people throughout the month, and 10,000 food packages will be distributed in Yemen. In addition to the increased amount of relief programs, the organizations also "provide assistance to Yemen in the fields of health, education, water and sanitation, building mosques, and many other projects," added Alsoudi.

During the first week of Ramadan, the IHH, another leading Turkish charity, distributed food to 200 poor families in el-Mehra in eastern Yemen. The IHH launched its Ramadan 2021 aid projects under the theme "Ramadan Brings Hope," aiming to deliver aid to around 2 million in 50 countries. The charity also set up tents for 400 families who had to migrate within Marib because of increasing clashes around the city in previous months. Approximately 2,000 Yemenis have benefited from the "Hope Camp Project." The IHH has delivered humanitarian aid to almost 1 million people with aid projects carried out in various regions of Yemen since 2020, according to reports from the group.

TIKA is also organizing Ramadan programs for hundreds of thousands of people in 87 countries, including Yemen. "Our priority in Yemen during Ramadan is distributing food to orphans and female migrants," TIKA's Yemen coordinator Abdullah Sarı told AA. "In Ramadan, we distribute an average of 65 tons of food. We are planning to distribute 7,000 iftar meals with an average of 500 meals a day."

The Sadakataşı Association, which started Ramadan activities this year with the theme "We are together in this Ramadan," delivered food parcels and iftar meals, the dinner to mark the breaking of the daily fast, to families living in the Marib and Taiz governorates. The association distributed iftar food to 500 refugees living in Marib and Taiz camps. Up to the end of Ramadan, 15,000 iftar packages will be delivered to refugees. Another distribution of 1,600 food packages, rice, sugar, salt, oil, tea, vegetable, tomato paste and canned goods were also delivered to families living in the camps.

These aid programs have strong effects on lives as they contribute to "alleviate poverty in Yemen and meet people's needs," said Alsoudi. In addition to reducing suffering, the aid "brings happiness to families and children. And it is considered as a kind of showing sympathy, harmony and brotherhood among Muslims," he added.

Data from IRC surveys reported that 66% of families have reduced the number of meals eaten, 74% rely on less preferred and less expensive foods, 71% had to borrow food or request help from friends and relatives, 68% had to limit food size portion and 57% had to restrict consumption by an adult for children to eat.