Ramadan: A month of charity for Turkey reaching out to the world 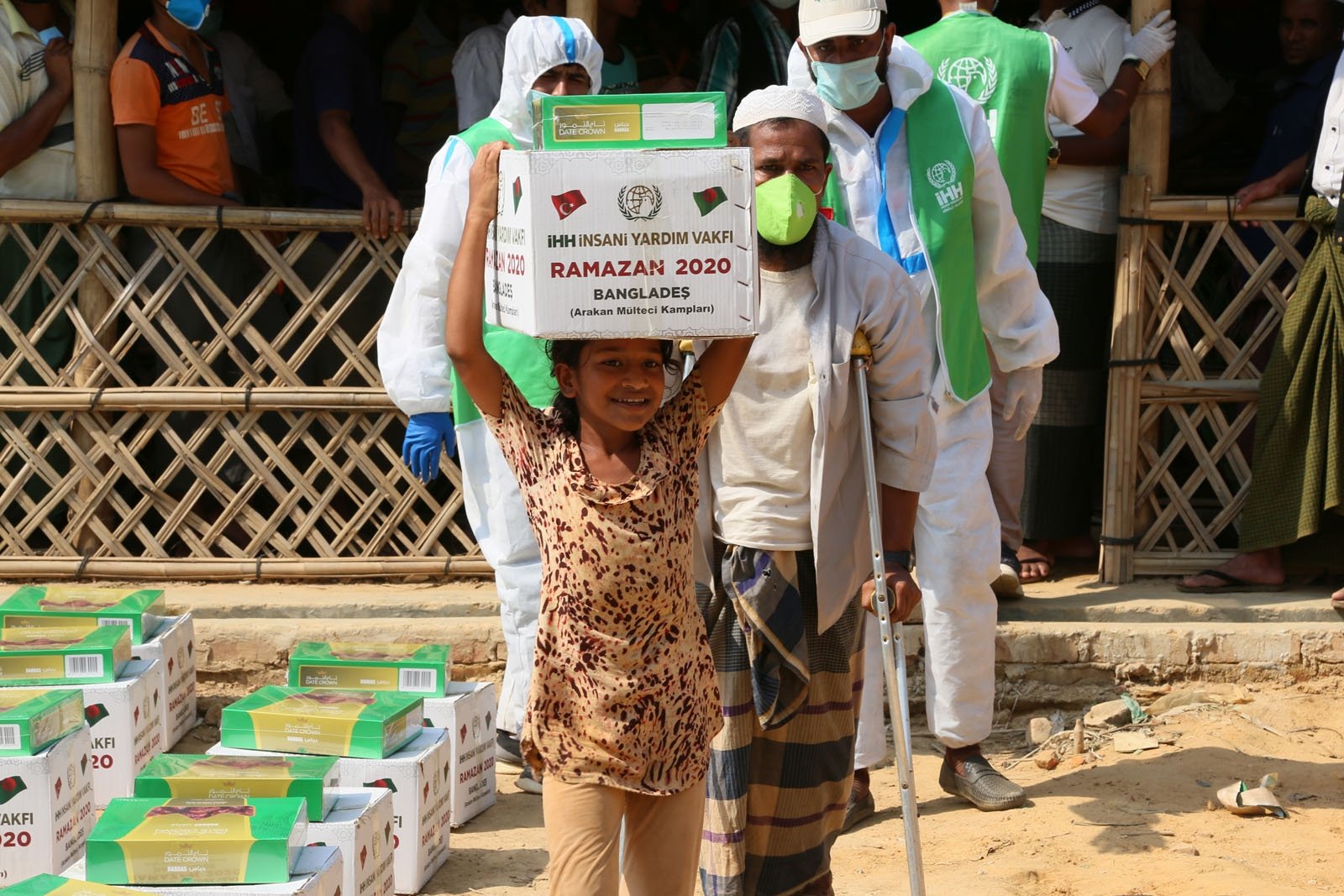 A girl carries an aid package donated by the Humanitarian Aid Foundation (IHH) at a refugee camp in Cox's Bazaar, Bangladesh, May 2, 2020. (COURTESY OF IHH)
by Daily Sabah with Agencies Apr 13, 2021 1:45 pm

The nation's charities mobilized as the holy month kicked off on Tuesday to deliver aid to millions in disadvantaged communities across the globe, a longstanding tradition

Ramadan is more than an ordinary month of fasting for Muslims as it is also marked with increased generosity. It is during this month that the faithful, who can afford to pay alms, fulfill the obligation of zakat, a form of almsgiving and a pillar of Islam. This occasion of charity grows with aid campaigns launched during the month by nonprofit organizations delivering aid abroad.

As the Muslim world is going through a difficult Ramadan under the shadow of the coronavirus pandemic, dozens of charities in the country hope to address the needs of disadvantaged communities, particularly with food.

The Turkish Red Crescent (Kızılay) is among the most prominent charities and it aims to reach some 8 million people with a campaign exclusive to the month. The Turkish Diyanet Foundation (TDV), associated with the country’s Presidency of Religious Affairs (Diyanet), will be active in 75 countries throughout the month and deliver aid worth TL 61 million ($7.4 million).

Mass iftar dinners, an occasion to break the fast for the faithful, will be absent this year as the pandemic forces people to hold back on such traditions. Charities instead will deliver food packages and meals by going door to door.

The Red Crescent allocated a budget of about TL 225 million for its Ramadan charity work and it will seek out donors for its campaign. Some 60,000 volunteers will work to deliver and organize the aid. The charity will operate 26 soup kitchens and 44 mobile kitchens to deliver iftar meals to more than 2.2 million people. It will also tap into the surplus of meat it collected from donors during Qurban Bayram (Eid al-Adha), a Muslim festival of sacrifice, last year. Canned meat will be delivered to more than 2 million people as food aid. The charity also plans to deliver cash aid of TL 500 to some 206,000 families.

Within Turkey, its aid campaign focuses on cities that suffered from earthquakes and floods, from Izmir in the west to Giresun in the north and Elazığ in the east. Some 40,000 families will also be given shopping coupons while 700,000 people will receive food packages.

Outside Turkey, the Red Crescent will be active in 18 countries and deliver 102,000 food packages throughout the month. It will also provide 110,000 clothing items to the needy in other countries, as part of its campaign for Ramadan Bayram (Eid al-Fitr) that marks the end of the fasting month and when people wear new clothes exclusively bought for the occasion.

The TDV, on the other hand, runs a campaign entitled “Remember Your Sister and Brother” for Ramadan aid. In 75 countries, it will reach out to millions with food packages, shopping coupons and clothing aid. It will deliver aid to more than 560,000 people in 14 countries, including iftar meals. In association with Diyanet, it will also gift Qurans to 90,000 Muslims in 36 countries.

The Humanitarian Aid Foundation (IHH), another prominent Turkish charity, is behind the “Hope in Ramadan” campaign that seeks to bring donations to about 2 million people across the world. The charity is active in 50 countries throughout the month, delivering food as well as cash in the form of fitr, a type of alms exclusive to Ramadan and zakat.

The IHH’s work will focus on countries and peoples affected by conflicts and natural disasters. It will also deliver aid to orphans in Turkey and in other countries, from clothes to cash and food. Some 100,000 orphaned children in 27 countries will benefit from the aid. The charity will send more than 200,000 food packages to people in need. In Turkey, it will prioritize needy families whose members lost jobs amid pandemic measures. Instead of mass dinners it hosted in years past, the IHH will deliver separate meals/food to more than 883,000 people for iftar dinners.

Istanbul-based charity Deniz Feneri will deliver food packages to 15,000 families in 20 countries and give cash (or Bayram harçlığı – bayram allowance, as it is known in Turkish) to 5,000 orphaned children. The charity’s work will concentrate on Idlib, the Syrian city whose rural areas are home to a massive population of civilians displaced by the ongoing conflict and in need of humanitarian aid. Three hundred orphans will receive the allowances in rural Idlib.

Deniz Feneri also runs a camp for the displaced in Syria’s Azez and it will deliver food and hygiene kits to families staying there, along with hot meals that will be delivered every day to thousands.

Volunteers from Sadakataşı, another charity, will travel to 30 countries for Ramadan, to deliver food packages to the needy families. It will also deliver alms given by donors to the impoverished families in Turkey, as well as in Yemen, Syria, Bangladesh and the Palestinian territories Gaza Strip and East Jerusalem. Sadakataşı will donate toys to some 6,000 children in 30 countries on the occasion as well, while it expects to complete the construction of water wells it undertook in countries and cities with water shortages.

The Cansuyu Association will focus its work in Turkey due to the pandemic but it will also reach out to crisis zones and disadvantaged communities as well, from Palestinians to Rohingya Muslims and to Yemen.

The Turkish Cooperation and Coordination Agency (TIKA) which is known for its development aid, will organize aid campaigns for hundreds of thousands of people in 87 countries. Instead of traditional dinners the agency normally hosts across the world, food aid will be delivered this year in countries from Afghanistan to Albania, Bangladesh to Ethiophia, Pakistan to Colombia plus Azerbaijan, Somalia and the Palestinian territories.