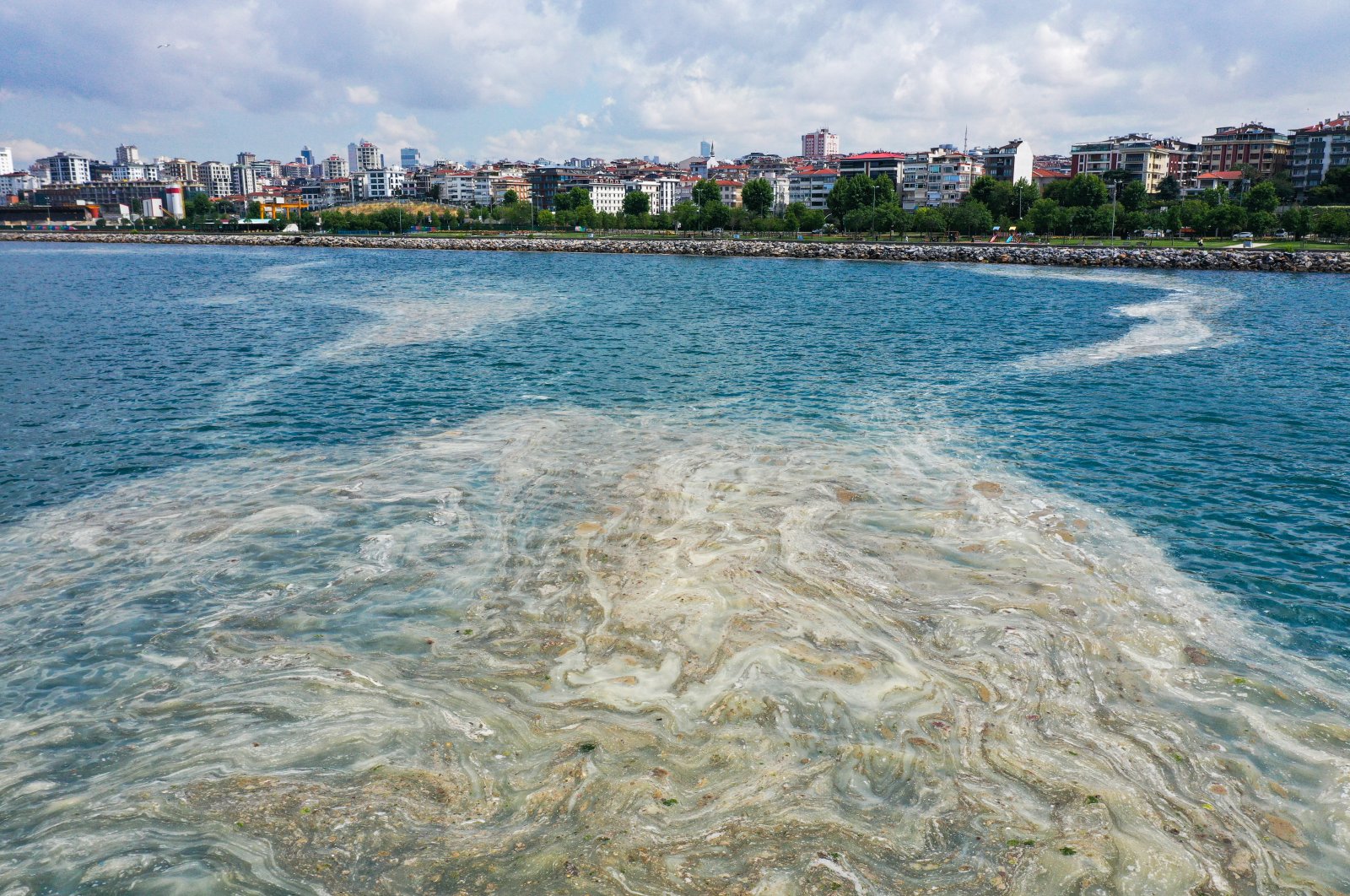 Turkey seeks a solution to the marine mucilage known as 'sea snot' which has taken over parts of the Marmara Sea, while scientists researching the phenomenon say it is 'unprecedented' and point to pollution's contribution to the situation

Turkey's Sea of Marmara has been battling the presence of a thick, viscous substance colloquially known as "sea snot" over the past few months. The phenomenon, defined as marine mucilage by scientists, is the result of mixed factors, from climate change to pollution. The government and the scientific community are looking for solutions to the issue. A research vessel from the Middle East Technical University (METU) examined the situation at sea and scientists aboard warned that the mucilage, not uncommon in the past, has reached unprecedented levels this year.

Professor Barış Salihoğlu, head of METU's Institute of Maritime Sciences, says mucilage was widespread, from the surface to the bottom. "We have seen a gel-like structure spreading across the sea and never encountered such a large mass before," he told Demirören News Agency (DHA) on Friday. The university's Science-2 vessel was deployed to the sea for mucilage research earlier this week and will continue research for four more days, before presenting its findings to the Ministry of Environment and Urban Planning which leads the cleaning efforts against the mucilage.

Salihoğlu says the mucilage is not something new, but this time it has significantly reduced oxygen levels at sea. He said the lack of waste treatment aggravated the situation. "Agricultural waste, industrial waste pouring into the sea from deltas, tributaries particularly worsened it. We need to halve the pollution at least. Cleaning the pollution at least by half would return oxygen levels to normal within five to six years. We need patience and also swift measures," he warned.

The mucilage, more visible in areas close to the coast, dealt a blow to fishing as it reduces visibility and harms the nets. Below the sea, the ecosystem is suffering, with flora and fauna dying. It also scares away swimmers, at a time when coastal towns rely on tourism revenues with the onset of summer.

Sea snot, basically a huge collection of microorganisms, increases with the discharge of nutrient-rich sewage into the sea. Salihoğlu says wastewater was discharged to the bottom of the sea with the presumption that it would "head" to the Black Sea but a large part of the discharge sticks on the surface and stays in Marmara. He noted that although wastewater treatment plants are operating, some need improvement. "The pollution should also be decreased in rivers too, especially in the Susurluk delta (south of Marmara)," Salihoğlu stated.

The government is currently running a workshop on the issue and is expected to unveil an emergency action plan Sunday. Minister of Environment and Urban Planning Murat Kurum told reporters earlier this week that they developed "short-term and long-term" solutions to the issue with scientists, non-profit groups, municipalities and local authorities. Kurum said the activities of industrial facilities played a role in the pollution and they would take steps to increase the number and capacity of wastewater treatment plants.

Eyyüp Karahan, head of the ministry's Directorate of Environmental Protection, says they had no means to intervene in the "dramatic rise in seawater temperatures" that worsened the mucilage but they can work to reduce the pollution. Speaking at the workshop held in the northwestern province Kocaeli, which is among the cities affected by the sea snot, Karahan said Friday that they have notified municipalities and governorates about the wastewater's contribution to mucilage in January and sought immediate action. He noted that Turkey had 1,170 wastewater treatment facilities run by municipalities serving 89% of the population and 249 among them were in the Marmara region. He noted that the recycling rate of wastewater has reached 3.2% and they hope to increase it to 5% in the next two years.

Tahir Büyükakın, the Kocaeli mayor who heads the Marmara Municipalities' Union, told the workshop that the Marmara has almost been treated like a "cesspool" for years, with sewage discharged without comprehensive treatment. "The Sea of Marmara should be viewed as part of a larger ecosystem, rather than a sea independent of its immediate region. We have to take steps to address the problem by tackling the sources of pollution, including those from the Black Sea and from the countries littoral to Black Sea," he said.

For Veysel Eroğlu, a former minister of Forestry and Waterworks, the solution is "easy" if the correct steps are taken. Eroğlu, now a lawmaker for the ruling Justice and Development Party (AK Party) said at a press conference Thursday that all relevant parties, from municipalities to the countries releasing wastewater into the Black Sea, should cooperate for a solution. "All municipalities discharging wastewater into the Marmara should have biological treatment plants. Nitrogen and phosphorus should be eliminated from industrial wastewater. We need an industry that creates less pollution and consumes less water. We need to rehabilitate all streams pouring into the Marmara. We need to check the pollution caused by pesticides. Finally, we need a tight inspection for pollution and to set up a monitoring network against pollution in all streams and all sources of wastewater pouring into the sea," he says. "This is not impossible. If all this is done, the pollution would be gone and so would the mucilage," he concluded.