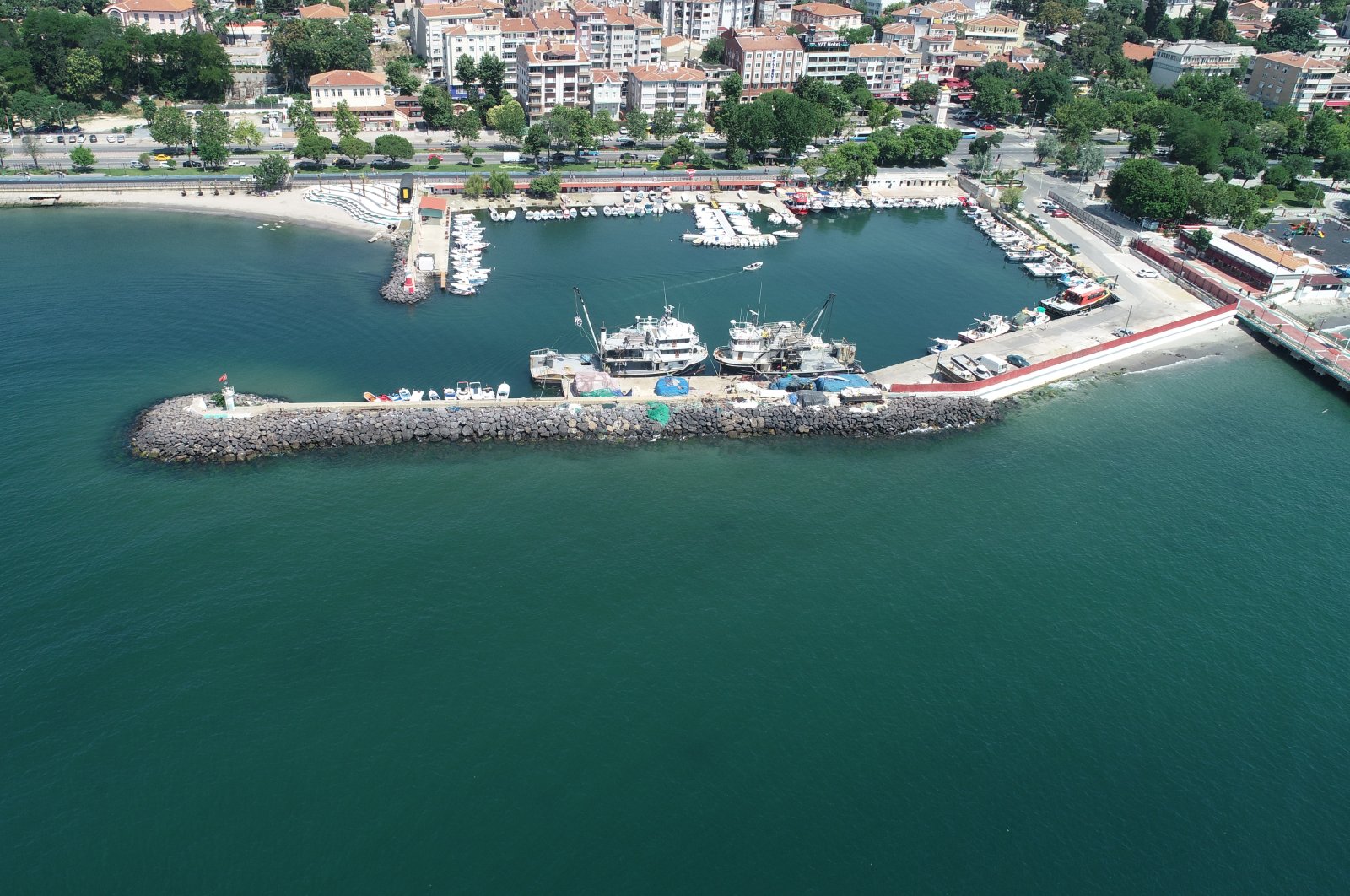 A general view of a harbor in Tekirdağ province after removal of sea snot from the surrounding area, Tekirdağ, Turkey, July 8, 2021. (AA Photo)
by Daily Sabah Jul 14, 2021 11:03 pm
RECOMMENDED

Turkish citizens can now go swimming and eat seafood without any worries, Environment and Urbanization Minister Murat Kurum said, noting that sea snot or marine mucilage, the thick layer of microorganisms covering the Marmara Sea has largely been removed from the surface.

He was speaking after a press conference regarding the Marmara Sea Action Plan Coordination Meeting in Istanbul on Wednesday.

Since last month, the ministry has been pursuing efforts to clean up the slimy substance that derailed the fishing sector and scared away swimmers.

“New formations of sea snot are not expected, according to our scientists. There is no trace of mucilage in the first 20 meters (65 feet), but there is snot in the bottom 10 meters. There is no mucilage 30 meters from the surface,” Kurum said. “We have issued a total of TL 23.5 million ($2.73 million) in fines to 175 businesses and 11 ships following a series of inspections. We have also ceased and desisted 52 businesses due to their actions against the environmental legislation,” Kurum added.

“The area covered with mucilage has decreased to 3.5 hectares. We have increased the amount of financial support to small-scale fishermen to TL 2,000-TL 2,900, twice the amount of the previous year. In collaboration with the Ministry of Agriculture and Forestry, we will endorse further payments of TL 4.2 million in total. No risks have been detected in the swimming areas, according to the Ministry of Health’s studies. We have run toxicological and pathological tests on mucilage that covers the swimming zones and have not encountered any negative results,” Kurum said.

The ministry will release a report titled “Regulation on Managing Ship Waste” by the end of August, Kurum said. “We will form floating disposal facilities that will allow us to recycle ship waste, and we will closely monitor the ships. We have increased the number of watch stations that track the reasons triggering mucilage to 150 stations. We have enlarged the area where we conduct research. We have conducted research and scans in various depths over 500 kilometers (310 miles) for 40 days on 234 stations since day one of the mucilage problem.

"These efforts were not only to clean the surface of mucilage, but we have cleaned the bottom of the sea as well as the top 20 meters near the surface. The remaining mucilage is trapped in the middle thus making it physically impossible to collect. The trapped snot is expected to organically dissolve and disappear. The aim is to diminish the occurrence of mucilage so it never resurfaces again, especially when we stop urban pollution,” Kurum said.

In collaboration with Gebze Technical University, Kurum revealed a new method for clean production. “We will fully prevent sewer-based odors and visual pollution by spreading this study to other cities. We conducted 4,412 sea pollution inspections between June 1 and July 13. We will support 25 of the 36 olive production facilities in Bursa, Balıkesir, Çanakkale and Tekirdağ to transform their three-phased production into two-phased production,” Kurum announced.