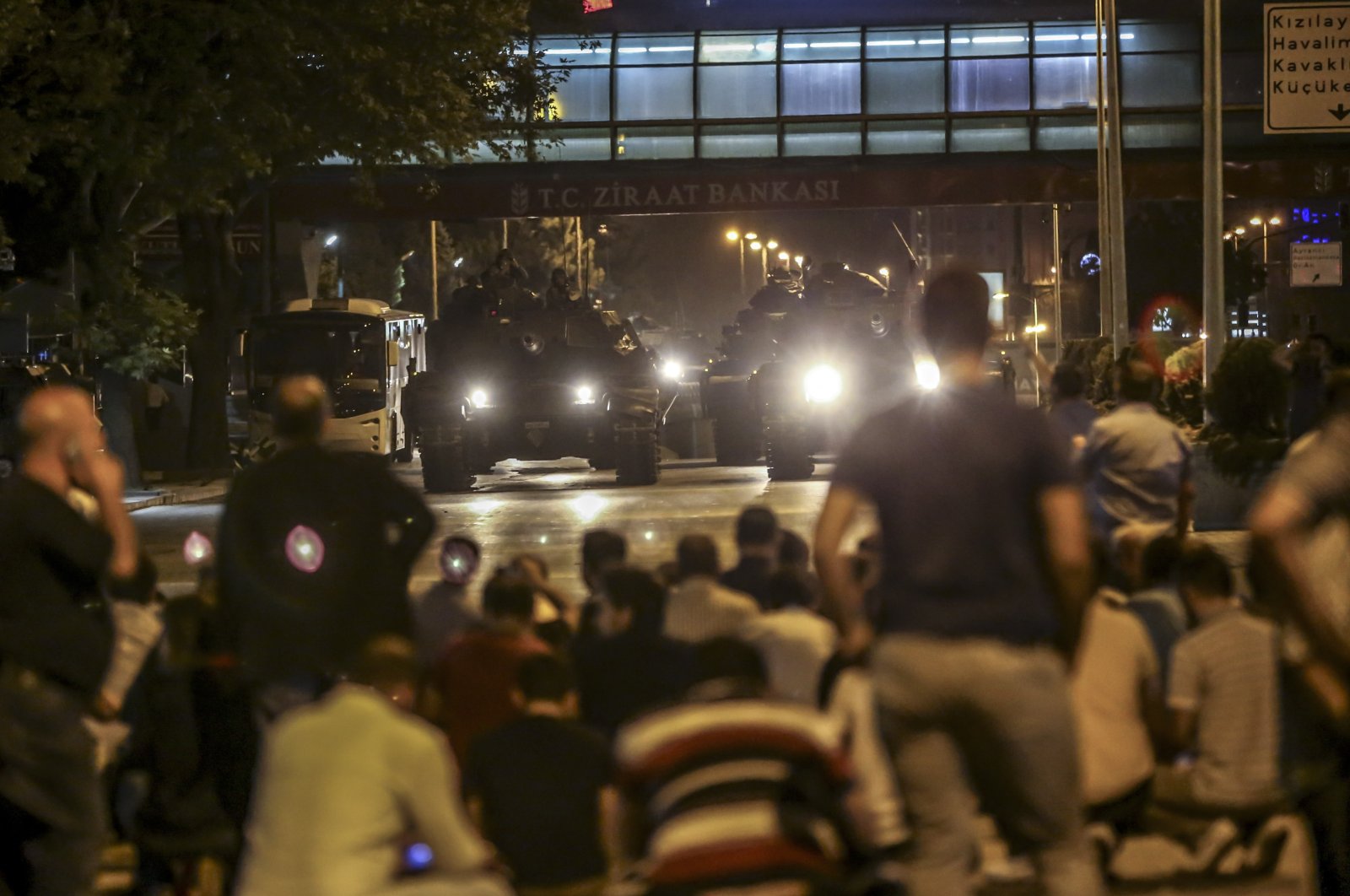 Turkey on Thursday marks the fifth anniversary of terrorist group FETÖ’s coup attempt, a sad but proud day for survivors, as the trials on the coup attempt near closure

July 15, 2016, was a nightmare for the people of Turkey and their democracy. Soldiers loyal to the Gülenist Terror Group (FETÖ) killed 251 and injured hundreds of others. Five years later, memories remain vivid for survivors who confronted the brutal junta that tried to seize power. They take comfort in having succeeded in thwarting the attempt. On the judicial side, the coup attempt is still an unclosed chapter, though only one trial is left out of dozens launched against the perpetrators of the attempt.

For Musa Ilhan, it was an unforgettable day and there is something that will never let him forget: a bullet lodged only 2 centimeters below his heart. The social worker in Istanbul was among those who took to the streets with nothing but their faith in convincing putschists to stop the attempt. However, they were going against soldiers serving the terrorist group and armed to the teeth. Ilhan, who now chairs an association for survivors and families of slain victims of the coup attempt, says he “envies" the 251 martyrs. “I wish I was one of them,” he says.

Ilhan remained in intensive care for days after putschists shot him outside Disaster Coordination Center (AKOM) in Istanbul on the night of the coup attempt. Doctors saved him but removing the bullet from his body was deemed too risky. It does not matter for Ilhan, who says he proudly carries it as a symbol of standing against the coup.

He would not have been shot if he had not gone to the Disaster Coordination Center (AKOM), a strategic venue that hosted the center for the city-wide CCTV camera system.

Ilhan had first joined others going to the municipality’s logistics center when he found out about the coup attempt. “Two trucks were carrying soldiers into the center. I asked them what were they doing. They told me that martial law had been declared. We argued with them, and soldiers told us to go home. We managed to disarm them and escort them out,” he recounted to Ihlas News Agency (IHA).

The situation was more violent in the AKOM, his next stop. “We could hear heavy gunfire and could not believe it. Turkish soldiers never fire on their own citizens. I was intimidated at first and retreated. Then, I decided to return. Soldiers were shouting at me to stop, and I told them I would not. They told me that they would shoot me, and I told them to do whatever you will,” he recalled. “I told the soldier blocking me to shoot me if he wanted, and he did just that. The last thing I remember is that I was almost flying when the bullet hit me, and others were trying to cover my wound and shield me from more gunfire.” He also does not remember his first words when he woke up at the intensive care, but a nurse told him that he asked if the president was still alive.

The day of the coup attempt is a date he remembers with pride. “May Allah keep this pride in the afterlife as well,” he says. The only thing he complains about is the “beeping sound” when he goes through X-ray scans at security checkpoints. The bullet in his body also always reminds him “how that charlatan could be a traitor too,” he says, referring to Fetullah Gülen, the leader of FETÖ.

Üzeyir Civan lost an arm when putschists opened fire on an anti-coup crowd gathered on the main road blocked by the soldiers in Istanbul’s Tuzla district. “Others lost their legs, but in the end, everyone stood for their homeland,” he says. Civan gets emotional while talking about people who died in the attempt and is “grateful” to them.

He was at home when he heard about the coup attempt from his relatives. He did not believe it at first, but when he heard the prime minister talking about it on TV, he decided to do something. “Minute by minute, I was getting angrier. I saw the 1980 coup and feared the same will happen again. Together with my relatives, we decided to go to (the nearby) Sabiha Gökçen airport,” he told IHA. Civan, his wife, daughter and relatives got into the cars and traveled to the airport to confront the soldiers. “My 15-years-old son wanted to come with us. He grabbed a stick. I asked him why he took it. He told me he would beat the soldiers. I told him we were not going there to beat soldiers but to warn them not to fall for this plot of putschists,” he recounted. They were stranded near tollbooths on the road, which had been seized by soldiers. “I got out of the car and ran toward them. I shouted at them to lay down their arms, that we were all brothers, and they should not join the coup. Then, they started firing at me. I was hit and felt like my arm would fall off,” he says. He remembers three young men, all Iraqi Turkmen, coming to his rescue. “They removed their shirts and pressed them on my wound so I would not die of bleeding,” he recounted.

He clung to life with the support of his family and relatives. “They did everything to make me forget the loss of my arm. I never worried about it for this reason. But my mother, up until her death, always felt sad upon looking at me. I am looking at photos we took together after (the coup attempt), and her eyes are still fixed at the spot where my arm was,” he said. “Just like my mother could not bear the sight of her son without an arm, people who died that night could not bear the thought of losing their country to putschists. May Allah bless them all,” he says.

“I don’t see it as a disability but a sign of honor,” Vahide Şefkatlioğlu says. A tank controlled by putschists crushed her and her husband on the day of the coup attempt. Her husband died while Şefkatlioğlu survived. However, her left leg had to be amputated, and she no longer has feeling in her crushed right leg.

Şefkatlioğlu, 45, and her husband Mehmet Şefik were painting their house in Istanbul’s Esenler district when a relative called them to tell them about the coup attempt. They did not hesitate for a moment to take to the street, to join an anti-coup crowd of civilians. A tank approaching the crowd from behind first hit her husband and, when she stumbled and fell, it crushed her legs. Şefkatlioğlu found out about his death when she woke up at the intensive care unit of a hospital months later.

The trauma of the day lingers in her memory, along with her pride for joining the country's defense against putschists. “I was wondering if people were able to defeat the putschists when I woke up. I later learned about my husband’s death. Like my legs, he used to keep me standing proudly in this life, and I lost all of them. I cannot walk as I used to. But I am blessed with being the wife of a martyr and being a ‘Ghazi,’” she told the Sabah newspaper. Ghazi is an Islamic term given to warriors who survived a battle. “It is not something you can forget, but I find solace that my husband died for an honorable cause. We fought against a treacherous attempt, and our children will fight for preventing a repeat of such an attempt,” the mother of three says. “We should always remember the July 15 spirit,” she adds.

Another solace for survivors and families of those murdered by putschists is the conclusion of trials of hundreds involved in the coup attempt. Only one trial is left out of 289 trials on the attempt, and it is expected to be concluded this year. Following the coup attempt, prosecutors all across the country launched more than 100,000 investigations into the attempt, as well as into infiltrators of FETÖ in the Turkish Armed Forces (TSK) who managed to hide their ties to the group after the coup attempt. Some 289 lawsuits were filed against perpetrators for both those captured and those at large. Putschist soldiers, from generals to sergeants, as well as civilian members of FETÖ who aided them, were handed down prison terms. More than 4,800 defendants received prison terms, including more than 1,620 sentenced to aggravated life imprisonment. A small number of defendants, including military cadets who claimed to be deceived into joining the coup attempt and not involved in the murders, were acquitted.