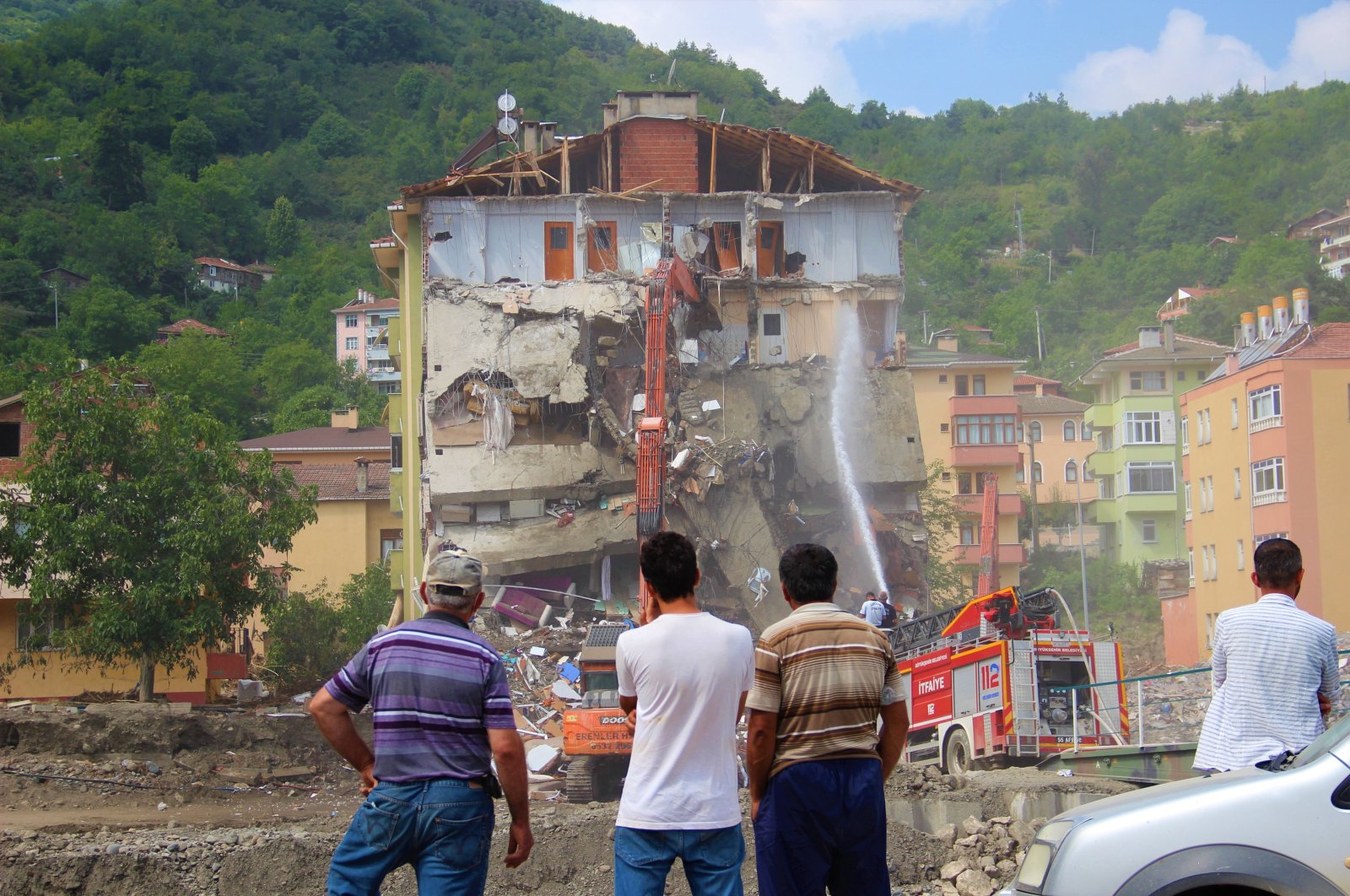 Floodwaters have receded in northern Turkey's Bozkurt where 68 were killed, leaving behind debris that is still being cleared and grim memories for locals who barely escaped death as crews continue search and rescue efforts for the missing

Wrecked cars, branches and trunks of trees accompany the ubiquitous mud on the streets of Bozkurt, a town in the northern province of Kastamonu that was hit by severe floods on Aug. 11. This town of fewer than 10,000 people was among the most devastated by the disaster, which spanned from Kastamonu to Bartın and Sinop provinces. Around 68 people were killed in Kastamonu, mostly in Bozkurt, while 10 others were killed in Bartın and Sinop.

Locals still await good news from their loved ones as search and rescue crews comb the debris, river beds and places where floodwaters dried up, as well as collapsed buildings to find some 26 people who are unaccounted for. Elsewhere, they join crews who arrived from all over Turkey to restore the town to its former days, removing mud from the streets, cleaning the buildings and moving away debris.

Waves of torrential waters reached up to 5 meters (16 feet) in some locations, reaching the first floors of the houses. Most survivors are those who climbed up to the roofs of the houses at the last minute.

Muzaffer Kalabalık had no time to climb up to a higher place. When floodwaters carried him away, he drifted on for some 200 meters before he grabbed a floating refrigerator and later a utility pole. Kalabalık, who works at a supermarket in Bozkurt, says he was at his workplace when floodwaters started filling it.

“I was near the refrigerator and waters pushed it. It hit me and I found myself floating. I grabbed a (protruding) wall of a shop next door but its windows suddenly burst open with floodwaters and I was again carried away,” Kalabalık said, recounting his encounter with the floods to Ihlas News Agency (IHA).

Kalabalık, who does not know how to swim, found “salvation” in the form of another refrigerator, which hit him amid floodwaters and pushed him toward a utility pole. He firmly grabbed the pole and managed to climb it, from where he managed to reach the roof of a house.

Kalabalık soon found himself rescuing others. He first grabbed the arms of a shopkeeper trapped inside his shop, pulling him to safety through a small window. Two men later helped another person trapped in a shop break the windows and escape. Soon, the survivors grew in numbers and started helping others from roofs.

“We helped a man who was trapped in his pickup truck. A couple was stranded in their car and the car coincidentally ended up at the spot we were standing. We pulled them to safety too. People on other roofs hurled us ropes to rescue others. Soon, we were seven people on the roof and waited there for about 10 hours (for evacuation),” he recalled.

Muzaffer Bal, the owner of a textile factory in the town, recounted how he rescued 32 workers at his factory, all women, at the time of floods. When they heard about the floods, workers rushed to the door but Bal stopped them, shutting the door. One worker managed to slip away and get into her car, only to find herself drifting in the raging floodwaters. She was rescued at the last minute.

After Bal shut down the door, floodwaters began inundating the small factory and people inside escaped only by climbing up to the upper floors and later, to the roof. Helicopters evacuated workers hours later.

“I saw the wall outside the factory collapse because of waters. I shouted to others to stay inside. But workers were worried about their families and wanted to get out. I stretched my arms and stopped each of them one by one and closed the door. Just as the door was closed, waters started breaking in, from five different points. Everyone was screaming and crying. The water was flowing in very fast and we climbed upstairs,” he recalled those moments to Demirören News Agency (DHA) on Thursday.

Elsewhere, Turhan Tekin, a retired military officer, managed to save 46 people from a damaged building. Tekin, living across the street, used a rudimentary pulley system he built on the spot to pull the residents to safety. Kartal Deniz Özkan, 12, was among those rescued by Tekin.

“People started running upstairs. We went to the fifth floor first then to the eighth. I was scared. I saw a lamp shaking and I felt the building would collapse. I remember others shouting to run,” Özkan told IHA. Özkan was with his grandparents when they managed to take shelter on the roof of an adjacent building. “Then, more rain fell and I thought we would die there. It was then I heard voices. There were two men and one of them was uncle Turhan. He tossed a rope and tied it to a tree. We slid along the rope and got out,” he recalled.

Batuhan Uçan, an imam, was at home when the floods hit. Everyone started boarding a helicopter sent to evacuate people, but Uçan preferred to help others. “Waters were as high as 4 meters. I saw cars being carried away. A helicopter arrived and a soldier told me to get in. I told him that I wanted to help others. There were five buildings next to each other, without a gap between and waters were rising. I checked each floor and escorted some 40 people to the roofs, to the helicopter,” he recalled to Anadou Agency (AA).

“I saw the fear of death in people’s eyes, I saw the despair. That’s when I forgot about my family and decided to help them. There was a boy, probably aged 3 or 4. He was so shaken and crying. He grabbed me tightly when I tried to walk him to the helicopter,” he said.

Elmas Kalafat appreciated the young imam’s work. “He was running back and forth on the roof. He was helping the elderly and children to reach the helicopter. I was scared he would fall from the roof but it was like he was flying. He did so much for these people and I think he is our hero now,” she said.

Though thousands have been saved, rescue efforts continue in the region. Disaster and Emergency Management Authority (AFAD) crews have been searching everywhere along the route of the Ezine stream, which overflowed its banks and caused massive damage in the floods, as well as in the Black Sea where the stream ends. On land, crews poke through thick layers of mud with their long sticks for possible bodies. Elsewhere, divers check the bottom of the Black Sea.

Currently, more than 10,000 public sector staff are working in flood-hit areas in Kastamonu, Sinop and Bartın, for search and rescue and cleaning and recovery efforts.

Deputy Interior Minister Ismail Çataklı, who was in Bozkurt on Thursday, said they aimed to conclude the cleanup work within 10 days. Çataklı told DHA that bad weather had hampered work in the initial days of floods but crews managed to evacuate some 2,288 people in Bozkurt. Evacuees were being placed in local dormitories and tents brought in by the AFAD.

Çataklı said that although the debris was largely cleared off the streets, buildings were still clogged with mud and debris and it would take time to entirely clean them.