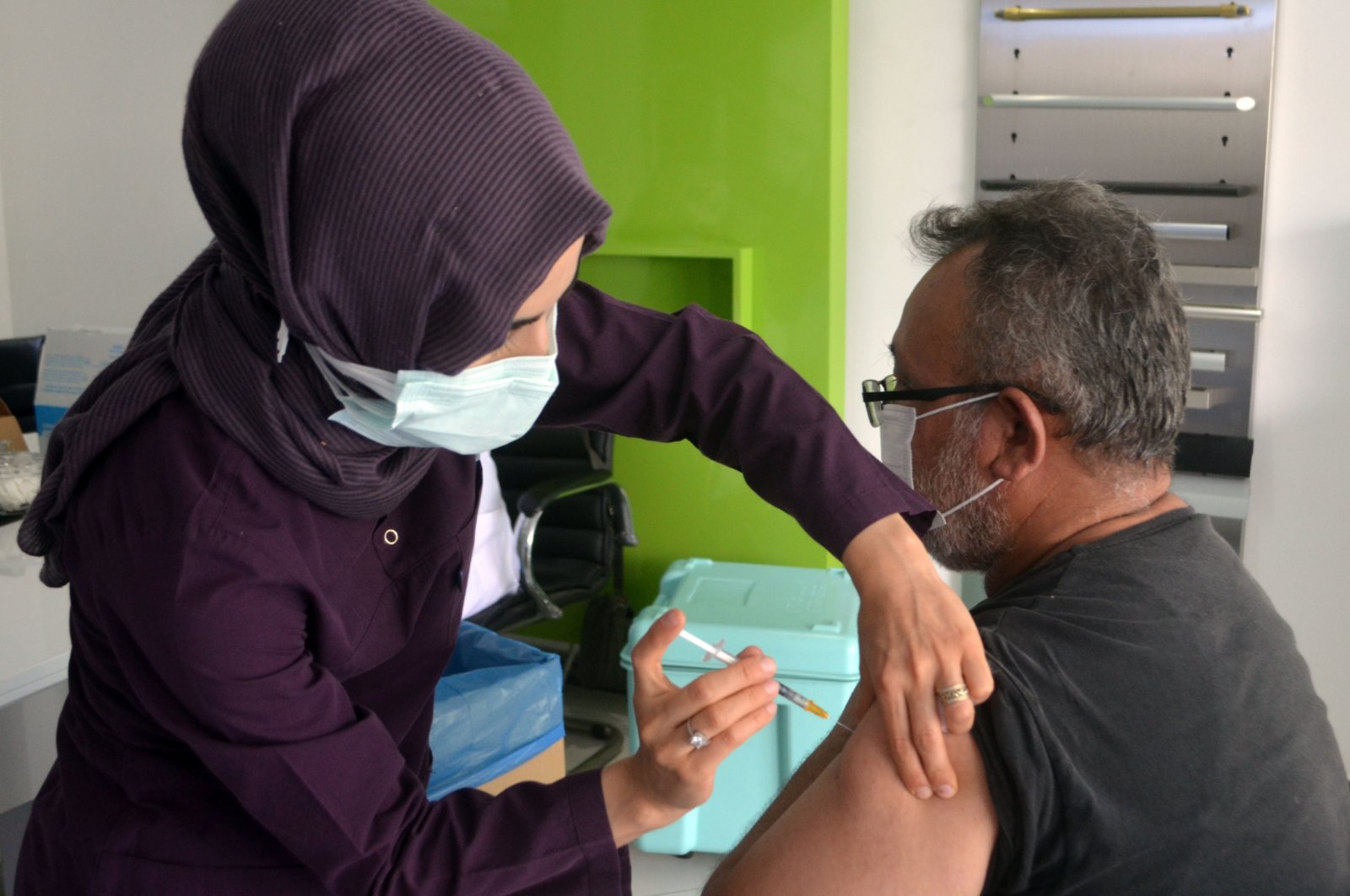 A nurse administers a COVID-19 vaccine jab to a citizen at a hospital in Turkey's northern Amasya province, the province with the second-highest vaccination rate, Amasya, Turkey, June 26, 2021. (AA Photo)
by Daily Sabah with Agencies Jun 27, 2021 11:47 am

Continuing full speed ahead with its mass vaccination efforts, Turkey has made it to the top 10 globally in the number of coronavirus vaccines administered so far, with hundreds of thousands getting the jab each day in the country

As the pandemic eases globally thanks to nearly 3 billion COVID-19 doses administered worldwide so far, Turkey has managed to get a top spot among the countries inoculating their citizens against the disease.

According to information gathered from Oxford University’s Ourworldindata.org website, the country with the most vaccines administered is China with over 1.12 billion jabs, followed by the United States with over 320 million, India with over 300 million, Brazil with nearly 93 million, the United Kingdom with 75.5 million, Germany with 70.5 million, France with nearly 49 million, Italy with 48.3 million and Turkey with over 46 million doses.

Meanwhile, Turkey rolled out a new stage in its coronavirus vaccination drive Friday, with people over the age of 18 now able to get their jabs. They will be the last group to be vaccinated as the Health Ministry tries to convince those who were in previously eligible groups but who have shunned doses to reconsider.

With appointments open, youth rushed to the online appointment app and filled hospitals and clinics on Friday morning for their shots. It was a much-anticipated stage in the pandemic for youngsters, who were repeatedly warned to adhere to coronavirus measures as a group, thought to be least affected by the virus but more prone to easily infecting others. Their inclusion will boost vaccination numbers, which reached more than 46 million on Friday, with 14.7 million people now being fully vaccinated.

“Everyone should get vaccinated. We have to trust the science of medicine and we need to protect ourselves,” 19-year-old Ece Çelikkol said as she arrived at the Ankara City Hospital in the capital for vaccination.

Aslı Cansu Bora, 21, said she was afraid of the potential side effects of vaccines but decided to have it as “a citizen with awareness of the need for vaccination to overcome the pandemic.”

Dr. Selmani Doğan, the deputy chief physician of Dr. Sadi Konuk Training and Research Hospital in Istanbul, said they were seeing an increasing demand for vaccination. He told Anadolu Agency (AA) that more young people are expected next week as this weekend’s university admission exams may disrupt registrations.

Doğan said they also sent crews to shopping malls and outdoor venues to set up vaccination booths to increase the drive. “The Health Ministry has a vaccination schedule and it is very busy now. We have to prioritize vaccination to return to normal life, to return to the days when we did not have to wear masks,” Doğan said.

Yaman Erdoğan, a 19-year-old university student, said he applied for vaccination because he wanted his school to be fully reopened for in-person education without the risk of infections.

Health Minister Fahrettin Koca on Friday shared the vaccination rates for provinces and named Edirne in the northwest as the province with the highest rate of inoculation at more than 68%. Edirne is followed by Amasya, Eskişehir and Çanakkale where the rate for each is around 67%.

Under a campaign entitled “We Roll Up Our Sleeves,” the Health Ministry seeks to convince vaccine skeptics to get their jabs, as they are now the last group not getting inoculated. The ministry set up “vaccine persuasion crews” all across the country. Crews visit skeptics at home and explain the benefits of vaccination. If they are convinced, citizens are delivered jabs on site or directed to the nearest hospital.

Ultimately, those below the age of 18 will be the only group exempted from vaccination, though a final decision on the issue has not been made yet.

Professor Serap Şimşek Yavuz, a member of the Health Ministry’s Coronavirus Scientific Advisory Board, told Demirören News Agency (DHA) on Friday that children may be administered a lower dose of vaccines. She said they are monitoring the results of vaccinations among children and young adults in other countries and may consider giving a low, single dose to children, and if two doses are needed, may prolong the period between two doses.

After combating vaccine hesitancy and delays in vaccine imports, Turkey went on to break daily vaccination records, surpassing 1 million per day this month. The numbers are a result of the Health Ministry’s inclusion of new groups in the campaign, almost on a daily basis. Though the campaign began with a focus on age, with the oldest citizens vaccinated first, it expanded into occupational groups regardless of age this summer, from teachers to factory workers. Venues were also diversified and the public can now have their jabs in factories, in the fields and orchards where they work, or as in some cities, at malls or tents set up at busy squares.

The drive also gained momentum with the arrival of more shipments of vaccines from Pfizer-BioNTech and China’s Sinovac. Russia’s Sputnik V vaccine is also expected to be available soon.

In the meantime, a locally made inactive vaccine launched its Phase 3 trials this week.

The inactive coronavirus vaccine began Phase 3 trials recently at a ceremony attended by Turkish President Recep Tayyip Erdoğan. The first volunteers were injected with the jab, which was named “Turkovac” by Erdoğan.

The vaccine is being developed in cooperation with Erciyes University and the Health Institutes of Turkey. It was tentatively named Erucov-Vac, after the name of the university. It is expected to be the first locally-made vaccine to be available in the country if it receives approval from the Health Ministry after safety tests. Earlier, authorities announced that it may be available before the end of 2021.

Speaking during a videocall to officials, including Health Minister Fahrettin Koca, at the ceremony held at the vaccine application center at Ankara City Hospital, Erdoğan said the locally made vaccine was “critical” to save Turkey from the threat of a pandemic. “This is the last stage to have our own vaccine. I hope the vaccine will start mass production and have widespread use soon. I call upon our citizens to get vaccinated as soon as possible to protect themselves and their loved ones from this (pandemic),” Erdoğan said.

Amid a nationwide fall in COVID-19 cases, Turkey is set to end all restrictions, which include nighttime curfews and a full lockdown on Sundays, as of July 1.

On June 1, the country eased some measures following a 17-day strict lockdown.

Since December 2019, the pandemic has claimed over 3.9 million lives in 192 countries and regions, with more than 180.1 million cases reported worldwide, according to Johns Hopkins University.