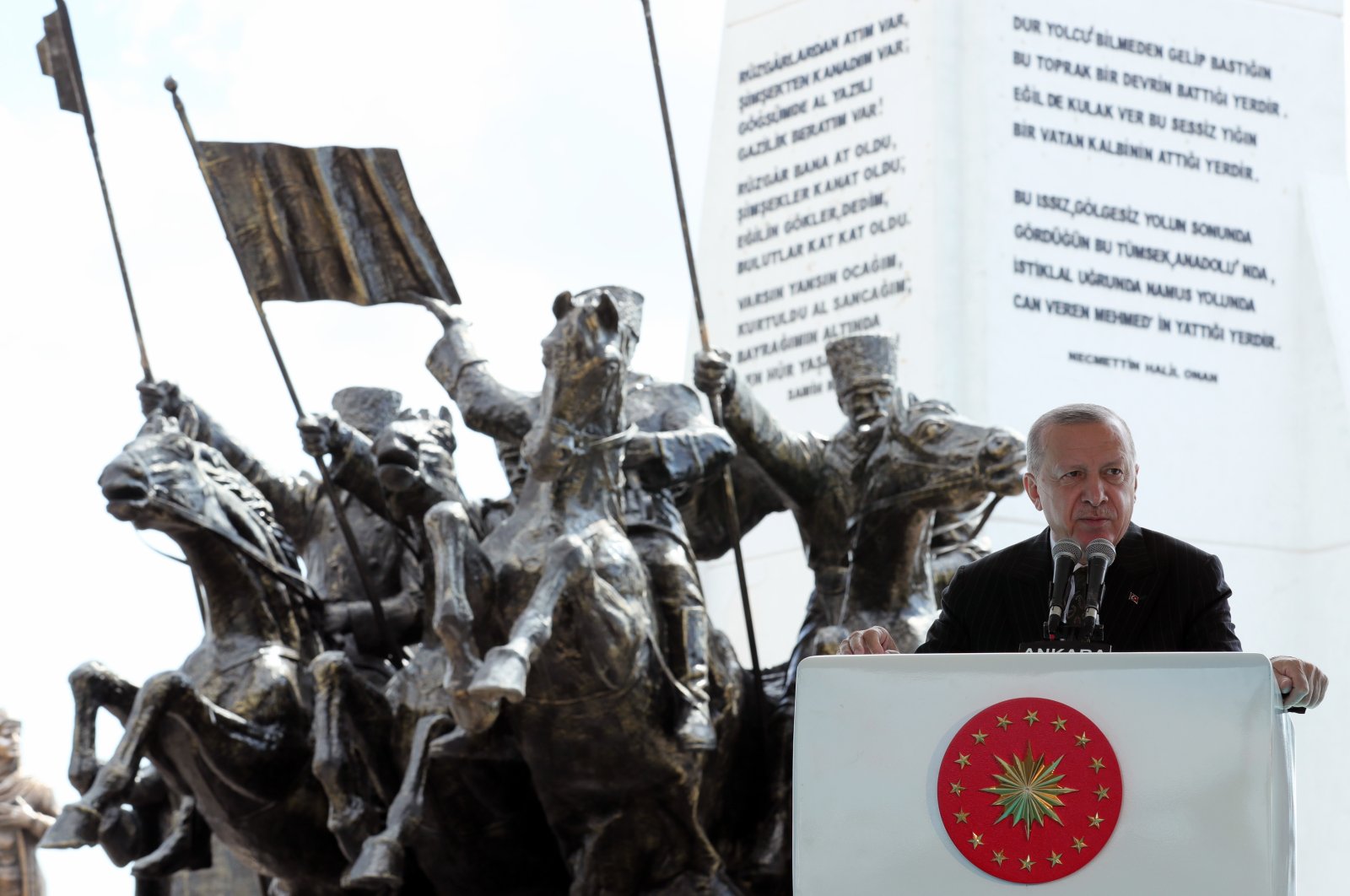 The 100th anniversary of the Battle of Sakarya, the final major victory against invading Greek forces, was marked on Monday with solemn ceremonies dedicated to heroes of the Turkish War of Independence led by Mustafa Kemal Atatürk

It has been 100 years since the battle changed the fate of a nation. On Monday, Turkey commemorated those fallen and victorious souls who sealed Turkey's independence with the Battle of Sakarya.

The battle, which pitted Turkish forces under the command of the Republic’s founder Mustafa Kemal Atatürk against Greek invaders, is hailed as the penultimate push to drive out occupying forces from post-World War I Turkey. It put an end to Greece’s ambition to capture Ankara, the future capital of the country, and forced Turkey’s western neighbor to accelerate their retreat to the west.

Fought mainly in Polatlı, now a district of Ankara, the battle drew its name from the Sakarya River that stretches from the northwest to the capital's borders. “There is no line of defense, there is a field of defense and this field is the entire homeland,” Atatürk had famously told the army before the battle, ordering troops to fight to the death, “even if you see other units falling next to you.”

The Battle of Sakarya began Aug. 23, on the banks of the Sakarya River and concluded Sept. 13, 1921, by stopping the Greek advance. It was preceded by another battle in the west that had forced Turkish troops to retreat. The Turkish retreat to the east of the Sakarya River had fueled a debate at the fledgling Parliament of post-Ottoman Turkey and dampened the public mood. Seeking a firm response against the Greeks, Parliament appointed Atatürk as the commander of the army that would counter the Greek advance. Atatürk mobilized the public by issuing a series of orders calling the nation to donate whatever they had to the army, from guns to food.

The strengthened Turkish side confronted the Greek side on the south of the Sakarya front on Aug. 23 and the battleline sprawled across an area about 100 kilometers long. Though exact figures are not known, some 14,000 soldiers died on the Turkish side while Greek forces lost as many men as well. The battle was one of the bloodiest in the war and Turkish forces rarely gave up the fight apart from brief retreats, despite the nation's exhaustion from World War I. The battlefield moved to the Haymana district of Ankara in September but the Greek offensive failed once again. Turkish forces drove the Greeks to their defensive lines and on Sept. 13, the entire Greek army was compelled to withdraw. One year later, and again in August, Turkish forces won the last battle, the Battle of Dumlupınar, against the Greek invaders.

The victory brought Mustafa Kemal, who then had the title of Pasha, the rank of Field Marshal and Ghazi (a veteran of the battle) awarded by Parliament.

“It was an important turning point in Turkish history,” said professor Birol Çetin, the head of the Turkish Historical Society, which was founded by the directive of Mustafa Kemal Atatürk. “This was a battle fought in the sacred heart of Anatolia. It was a time where artillery shelling was heard in Ankara. Atatürk’s military genius played an important role under such difficult circumstances. Nobody was expecting that Anatolia would demonstrate such fierce resistance. Until then, Turkish forces had been on the defensive side and gradually retreated. The Battle of Sakarya was a comeback for Turkey and restored the confidence of the Turkish nation (against the invaders),” he told Anadolu Agency (AA).

“The Turkish army did not have sufficient ammunition, nor guns but sacrificed a lot to win the battle,” he added.

For professor Temuçin Faik Ertan, a historian from Ankara University, the battle was the end of “a lengthy process of withdrawal since the Siege of Vienna.” Ertan explained: “The battle’s outcome also triggered disagreements between occupying forces and showed French and Italian forces that the Greeks were doomed to fail against the Turks. They withdrew their support to the United Kingdom's Eastern Mediterranean policies. The French signed the Ankara Agreement with the Turkish Parliament, ultimately recognizing its legitimacy while the Italians entirely withdrew from Anatolian lands. The U.K., for its part, largely withdrew its military support for Greece.”

President Recep Tayyip Erdoğan marked the occasion from Duatepe in Ankara. Speaking in front of a monument erected in memory of fallen soldiers on the famed hill, which was first to be captured from the enemy 100 years ago, Erdoğan said the story of the victory should not be forgotten.

“We must remind the future generations how the War of Independence was won, under which circumstances and through great sacrifice,” he said at a remembrance event. “Our soldiers, determined to defend the homeland until they ran out of blood, fought with the same resolve throughout the battle. The battle was crowned with Great Offensive one year later and reached its final conclusion after the enemy was driven to sea on September 9 in (western province) Izmir (in 1922). This episode in our history also showed us the true face of our enemy, who torched and destroyed everything in their path as they retreated from Sakarya."

The president later inaugurated a culture center and a renewed cemetery of fallen soldiers in the area. The center will serve as a museum that will tell the story of the battle.