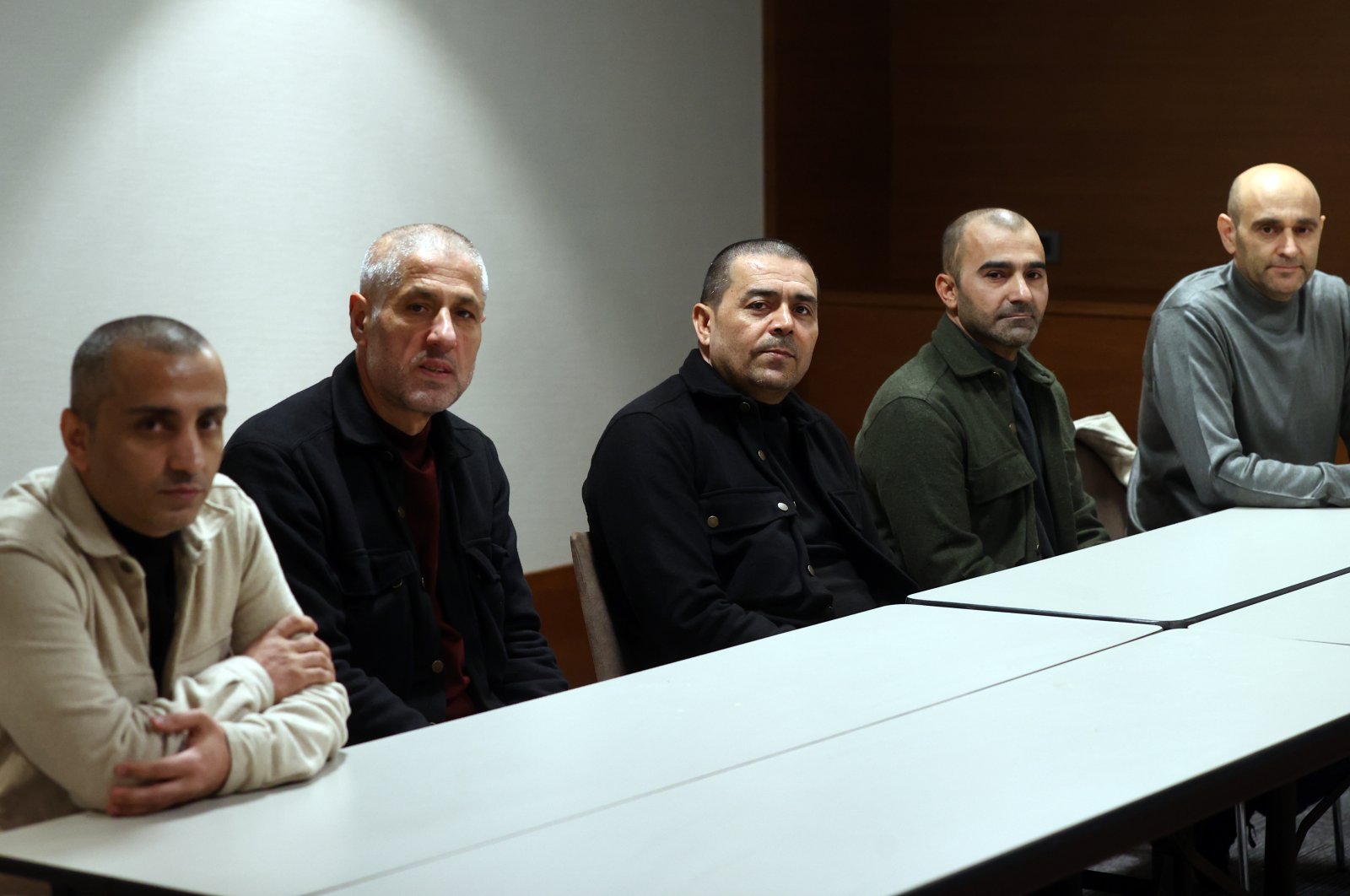 Turkish and Qatari intelligence on Sunday ensured the safe return of seven Turkish citizens who were held for nearly two years by forces loyal to putschist Gen. Khalifa Haftar

Seven Turkish civilians, who were held on baseless allegations in Libya’s east by forces loyal to putschist Gen. Khalifa Haftar, are finally back home after about two years. Turkey’s National Intelligence Organization (MIT) saved the group in collaboration with Qatari intelligence.

The citizens, most of whom were working at restaurants and bakeries in Libya, were identified as Ilker Sağlık, Doğan Kıssa, Nurettin Çalık, Halil Gözel, Ahmet Selvi, Hidayet Yaprak and Abdul Samet Akçay. The Foreign Ministry and MIT have been pursuing efforts over the past two years for their release.

President Recep Tayyip Erdoğan contacted the citizens to wish them well and they, in turn, thanked the state.

Libya has been mired in civil war since the overthrow of dictator Moammar Gadhafi in a 2011 uprising. The bloodshed has drawn in competing Libyan factions and extremist groups as well as foreign powers.

In April 2019, Haftar and his forces, backed by Egypt, Russia, France and the United Arab Emirates (UAE), launched an offensive to try and capture the capital, Tripoli. His 14-month campaign eventually collapsed, and the fall of Tripoli was prevented after Turkey stepped up its military support of the U.N.-backed government.

In a written statement on Sunday, Turkey's Ministry of Foreign Affairs announced that seven citizens were safely brought to Turkey after “lengthy efforts.”

“During this process, the condition of our citizens has been constantly monitored with efficient cooperation between all our relevant agencies and institutions, particularly our embassy in Tripoli and the National Intelligence Organization, and intense efforts were exerted for the safe release of our citizens,” the ministry said. The statement also thanked the governments of Libya and Qatar for their contributions to the release of the citizens.

Halil Gözel, 57, had been working at a Turkish sweet shop in Sirte since the summer of 2019 before his detention by pro-Haftar forces on Feb. 6, while Nurettin Çalık, a baklava baker, last had contact with his family in February 2020. "My older brother went (to Libya) to earn money, he isn't guilty of anything. He went there to pay his debts but unfortunately, he's now arrested (by Haftar forces)," his brother Mehmet Çalık told Anadolu Agency (AA) shortly after his disappearance. "We were told by those who were kept in the same ward as him that they were tortured and getting sick a lot. Perhaps he is ill now and we don't know. His friends who were able to come back said they had gotten scabies in prison because they were unable to clean themselves." He said his brother was kidnapped by Haftar's militias because of his nationality.

Ilker Sağlık, 43, was running the sweet shop in Sirte with his partner Gözel. A baklava baker hailing from the southern Turkish province of Adana, the father of two was taken into custody on Feb. 6, 2020. He was last transported to Benghazi, according to the account of another Turkish citizen who managed to escape arrest by pro-Haftar forces.

Speaking to AA after their arrival in Turkey, the rescued men recounted their days in Libya.

Ahmet Selvi, a 45-year-old engineer was running a company in Libya where he had been working for about 13 years. He was traveling with his Libyan wife when their car was stopped at a checkpoint by Haftar forces in November 2019. "They ordered me to step out of the car when they found out that I was a Turkish citizen. Then, they took me to prison. I could not see or talk to anyone from my family or any friends for two years," he said.

He said he thought he would be let go after they searched his car at the checkpoint. Instead, militia handcuffed and blindfolded him and removed his clothes before he was taken to the prison in Benghazi. Selvi added that he was subjected to "violence" during his time in prison.

"One day, four soldiers took me somewhere outside my cell. One was holding a baseball bat and the other two had a cable and a water pipe. They started beating me up, almost to death. My body was covered in bruises, from my knees to my back. I could not sit down for more than one month. It was painful," he recalled.

"I was stressed whenever the door was opened, thinking whether they would beat me again," he added. Still, he did not lose hope. "I knew I would be rescued," he told AA.

Selvi said they were held in a military prison and were not allowed outside their cell. "For months, we could not see the sun," he said.

Ilker Sağlık said he was taken to prison after a raid on his shop. "I asked them why they arrested me and they told me it was because I was a Turk," he said.

Sağlık, whose wife and 3-year-old daughter lived in Tripoloi with him, did not see them again after his arrest.

"Being free again is something I cannot describe. I am very happy to reunite with my family, to return to my home country. I am grateful to President Recep Tayyip Erdoğan. MIT President Hakan Fidan and other officials worked hard to save us," he said.

Halil Gözel said he was subject to physical and psychological torture during his time in prison but always believed that Turkey would save him. "The world should know that the Republic of Turkey is strong. I felt emotional when Hakan Fidan met us and hugged us, when President Erdoğan called us. Not every statesman would do that," he said.