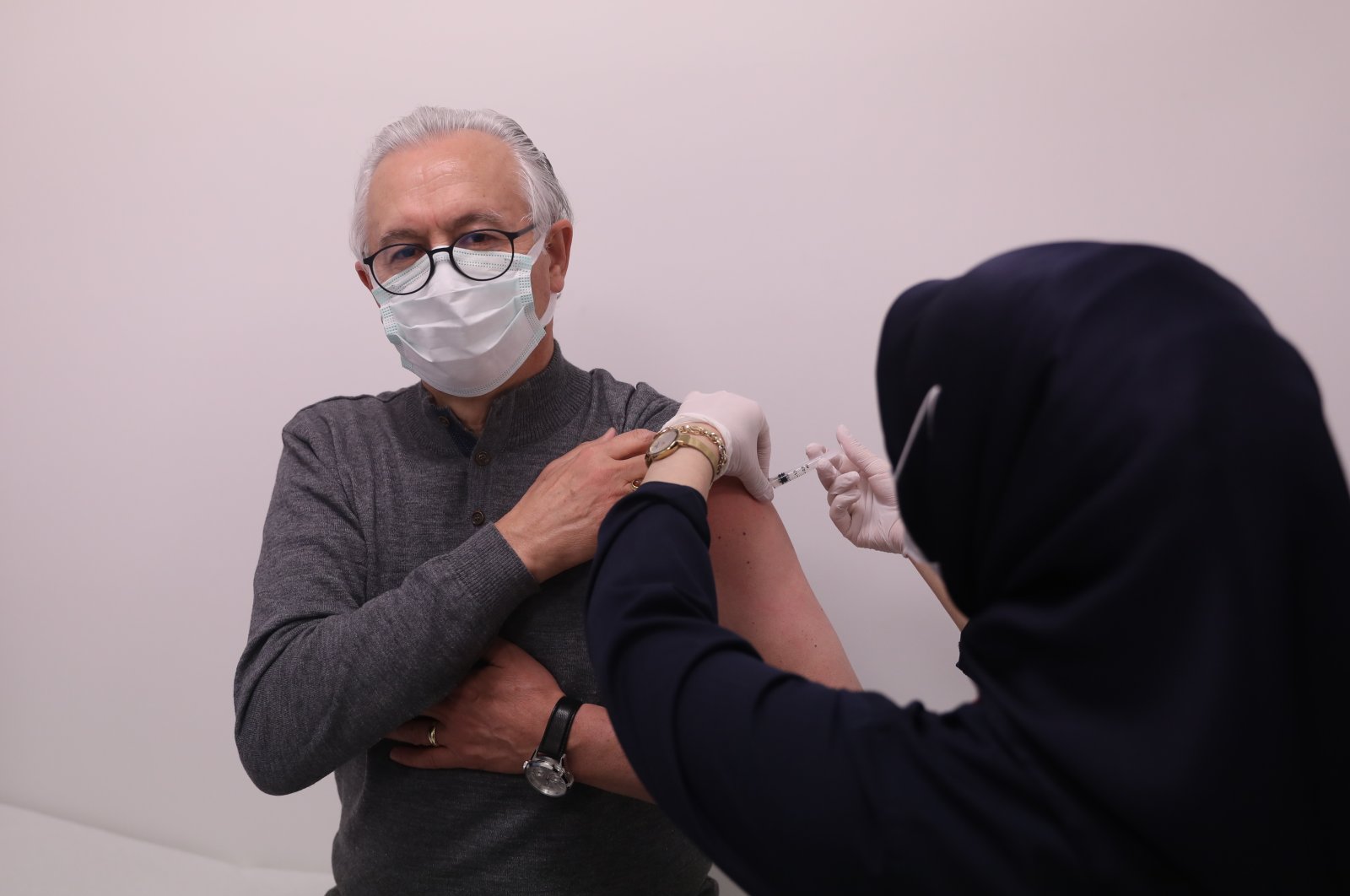 Citizens aged 60 and above, as well as those with chronic diseases like cancer, started receiving COVID-19 jabs on Monday as new variants quickly spread across the country, prompting 'full lockdown' rumors

Vaccinations are among the few weapons in Turkey's arsenal as it continues an uphill battle against the coronavirus outbreak. The country started vaccinating people aged 60 and above as well as their spouses, regardless of age, about two months after the start of the inoculation drive for older citizens and health care workers.

Those with cancer, dialysis patients, people with Down syndrome, patients depending on immunosuppressant drugs and people classified as morbidly obese are also included in the latest round of the vaccination program.

Yet, coronavirus cases do not seem to be dwindling; on the contrary, they have climbed to near 30,000 per day. Media outlets report that no “radical” measures are being considered despite the rate of variants among new cases steadily increasing, especially in big cities. But some media reports point to "full lockdowns" being on the horizon for cities at very high risk of an increase in infections.

Turkey currently uses CoronaVac, an inactive vaccine developed by China’s Sinovac, but it will soon start providing Pfizer-BioNtech vaccines to citizens, authorities recently announced. So far, more than 15 million people received their COVID-19 shots, including more than 6.5 million people who have received their second doses since Jan. 14, when health care workers became the first to be inoculated.

Appointments to be vaccinated can only be made online or by calling a hotline. Necati Yavaş, a 63-year-old man who received his first shot at Ankara City Hospital in the capital, told Anadolu Agency (AA) that he was glad to be vaccinated. “I did not feel any pain. Indeed, I feel very good. Everyone should get a shot,” he said. Ali Ülger, a 60-year-old man who was vaccinated at the same hospital along with his wife, says he was grateful to the state for having people vaccinated. “I hope we will overcome this catastrophe together. Everyone should be careful and follow the rules. Let us wear our masks and care about our hygiene. This is a disease we can overcome if we act together,” he said.

A total of 100 million doses of new vaccines were expected to arrive in Turkey by the end of May. In addition to CoronaVac, Turkey has now received 1.4 million shots of Pfizer-BioNtech jabs and according to Health Minister Fahrettin Koca, this figure will reach 4.5 million by April. He added that an optional deal for another 30 million shots from Pfizer-BioNTech has also been made.

Along with reckless people disregarding the rules, in the aftermath of a normalization process, new variants of the coronavirus that originated in other countries have triggered concerns for the wider population. A rapid rise in the daily cases changed the nationwide outlook in the outbreak. In a color-coded map designated by the Health Ministry to demonstrate the rate of risk in each of the 81 provinces, most big cities are now “red” or at very high risk.

A report in the Sabah newspaper says 80% of new cases in the country stemmed from British variants. In Istanbul, the country’s most crowded city with more than 15 million people, the rate of variants in new cases is 70%. Experts say variants have the ability to spread faster, though they may be less deadly and might be recovered without hospitalization.

Authorities, on the other hand, prefer a gradual approach and will likely shun tighter restrictions. Since the normalization process started, only provinces under high risk continued imposing restrictions while other cities mostly “reopened”, allowing businesses, such as restaurants and cafes, to partially operate again with customers at the tables, and lifting of Saturday curfews.

Reports point out that crowded venues and events can be restricted, however. Authorities ponder strict weekend curfews, limited working hours for some businesses and closure of busy streets to pedestrians, based on the state of the outbreak in any given province. A “full lockdown” is out of the question for now but provinces under risk, where the authority on restrictions relegated this power to local administrations, may take a step to that extent. For instance, Samsun, which has the highest average number of weekly cases, despite measures, may be subject to a wider lockdown, if the surge in cases further burdens local hospitals. A full lockdown means tight curfews and a state of “quarantine” where entries and exits to the province will be closed.

On April 13, Turkey will mark the beginning of Ramadan, the Islamic month of fasting and an occasion with the potential to create crowding, especially during iftar dinners when the faithful break their fast. A three-day holiday follows the month, with millions of people traveling between cities. Authorities have considered extra measures throughout the month, but they will likely be based on the status of each province in terms of infection rates. Anticipated measures include limited working hours for restaurants and cafes and a full lockdown on weekends, along with restrictions at mosques where large crowds gather every evening for a prayer exclusive to Ramadan.

Experts say that the country, which experienced a second wave in the outbreak last year, has not been through a third wave yet. They point to the upcoming weeks for the new wave before cases “plateau” in May, with the aid of a mass vaccination drive.

Professor Mustafa Necmi Ilhan, a member of the Coronavirus Scientific Advisory Board that advises the government on outbreak measures, said curbing the cases “in a week” is quite possible, “if only people fully follow the rules,” he told Demirören News Agency (DHA) Monday. The rules he underlines are wearing protective masks, social distancing and hygiene, as well as proper ventilation of enclosed spaces where people live or work together.

Ilhan said authorities may mull restrictions in provinces with a high rate of infections, but one of the most important measures would be “limiting exits” from those provinces. “It is difficult to maintain a travel ban between provinces with very high risk and those with lower risk. Even with a HES code, you cannot prevent all people from leaving one province to travel to another,” he said. Ilhan was referring to a code acquired through the “Life Fits Into Home” (Hayat Eve Sığar) application of the Health Ministry. The code allows tracking the health status of any person and is usually requested from people entering public buildings and for intercity travel. “I think it is easier to impose restrictions on a district with a cluster of cases in a province rather than a travel ban on the entire province,” he said.