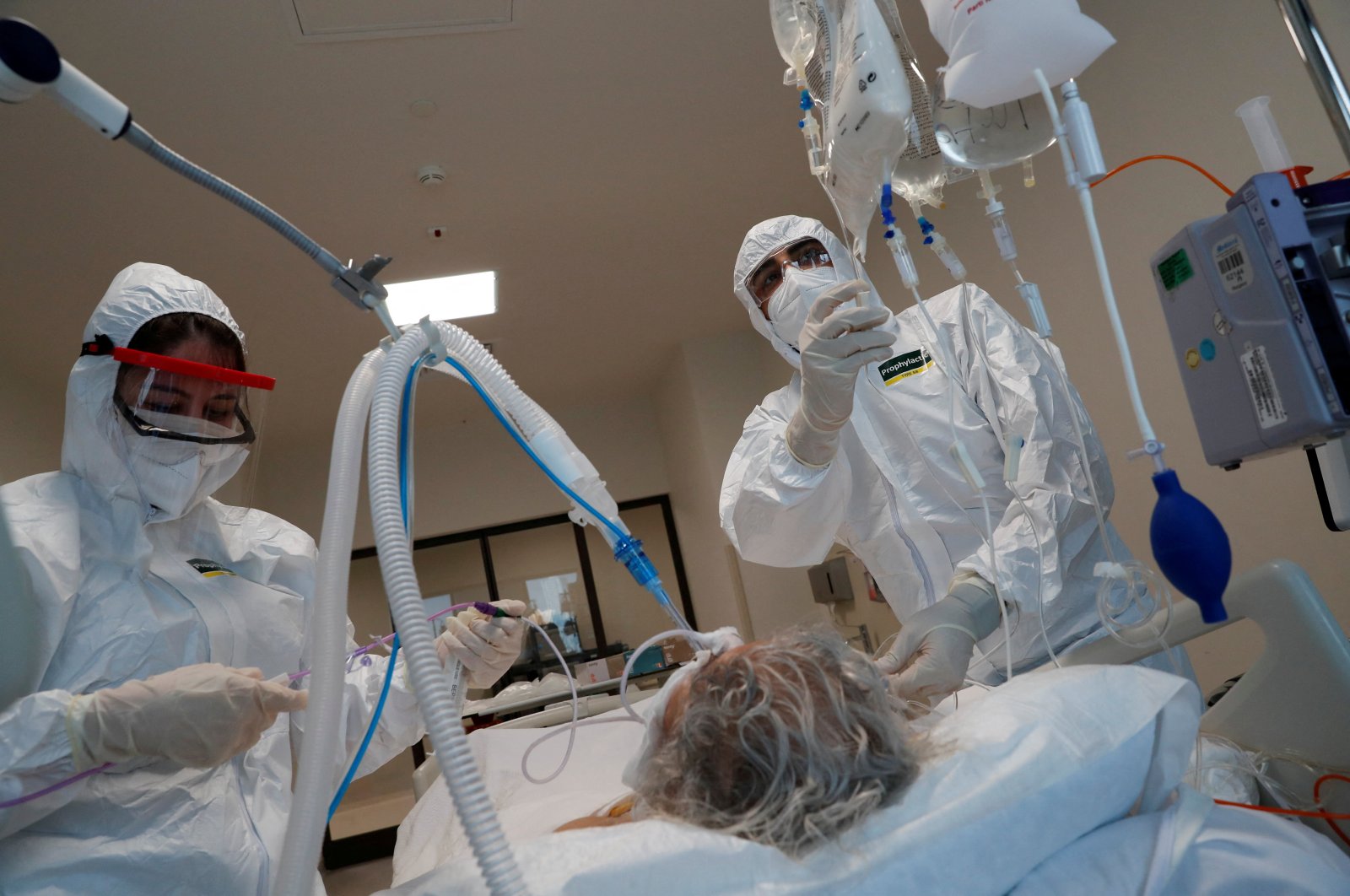 As the highly contagious omicron variant continues to rattle, Turkey is witnessing a surge in the number of daily cases

The omicron variant of COVID-19 that overtook other strains worldwide has also reached Turkey, with the country registering more than 66,000 new COVID-19 cases on Saturday amid the fast-spreading variant, data from the Health Ministry showed.

To stem the spread of the infection, the country has administered nearly 136 million doses of COVID-19 vaccines since it launched an immunization drive in January 2021, according to the latest figures.

Professor Alper Şener, a member of the Health Ministry's Coronavirus Scientific Advisory Board, told Demirören News Agency (DHA) last week that Turkey may see a significant rise in the number of COVID-19 outpatients next month and an extra burden on health care services.

"Figures were more stable (in December) but we expect the rise to continue. It is not possible to stop the surge any time soon," he said, regretfully drawing attention to the fact that people have been discarding personal protection measures like wearing protective masks and adhering to social distancing. He also pointed out that there were still a number of people refusing to receive their third dose of a vaccine.

"Two doses are not sufficient against omicron as we have seen in other countries," he highlighted. Turkey has been conducting a nationwide vaccination program since January 2021 that was expanded to all age groups last summer.

In a statement on Sunday, Şener also said that shorter 7-day quarantine time may help “break the chain of infections.”

“Because of the longer quarantine times, many people were hesitant to get tested,” he said, referring to citizens concerned about facing problems with their employers due to the 15-day quarantine during in which they couldn’t work.

“And this situation was leading to the further spread of the virus,” Şener added.

“With the new system, the number of tests with positive results has increased too,” he said.

Turkey is also experiencing a surge in influenza and similar respiratory illnesses, especially among children, something linked to decreased use of masks and a lack of other personal measures.

In Istanbul, hospitals are facing a surge in the number of people applying for vaccination and polymerase chain reaction (PCR) tests. Professor Nurettin Yiyit, another member of the board, says the youth make up the majority of new cases and that there has been a rise in the number of infected children. "They are more mobile and less compliant with rules," he told Anadolu Agency (AA).

Meanwhile, Turkey continues its vaccination efforts at full speed, especially with the addition of its domestically developed vaccine, Turkovac.

Professor Ateş Kara, president of the Turkish Vaccine Institute and member of the Ministry of Health's Coronavirus Scientific Advisory Board, warned that there was serious risk involved with variant's spread and that the efficacy of Turkey's own coronavirus vaccine, Turkovac, showed promising results against the variant.

"For instance, when the city of Şanlıurfa reported cases, the time period for all the delta variant cases was around six weeks. According to the data in Europe, this period in omicron is two or three weeks. In other words, it is transmitted almost twice as fast."

Kara stated that intensive studies on the efficacy of the Turkovac vaccine are underway and emphasized that they were pleased with the citizen's interest in the vaccine.

He explained that when the data and studies were analyzed, "the antibody levels we obtained seem to provide protection against omicron."

"Our work in this direction and our efforts to combine scientific data are continuing. When we compare Turkovac with the data we have available, it also provides protection against omicron, but how long it will last, it is not possible to say now."

Kara stated that citizens in Turkey are now more aware of vaccinations. Noting that Turkey started administering the booster dose earlier than the rest of the world, Kara stated that this situation played an important role in reducing the impact of the virus.

Kara also emphasized the importance of the booster dose.

"The booster dose application in Turkey started a little earlier than in Europe, this was an advantage, but the important point here is, it is very important for people the booster dose, for unvaccinated people to get vaccinated, for this epidemic to stop, prevent the spread of omicron and to be protected from COVID-19."

Aykut Özdarendeli of Turkey's Erciyes University, one of the Turkish scientists who developed the vaccine, said that work would soon begin to determine the efficacy of the vaccine against omicron.

Özdarendeli said that the team observed "100% protection" against both the delta and alpha variants in transgenic mice injected with the vaccine.

"We plan to start studies on the isolation of the omicron variant as soon as possible, as we see that omicron is rapidly becoming dominant across the world," he said. "We will soon see Turkovac's effectiveness against omicron."

While Phase 3 trials of the vaccine are ongoing, data from Phase 1 and Phase 2 tests, as well as preclinical data, were brought together in the application for emergency use approval, he noted.

Özdarendeli urged all who were eligible, unvaccinated as well as those who haven't been infected, to participate in the Phase 3 trials.

In a televised interview, President Recep Tayyip Erdoğan underlined that the local vaccine is also sure to eliminate any hesitancy among the Turkish public that may have arisen due to widespread conspiracy theories and anti-vaxxer propaganda as the country has administered nearly 130 million doses.

“I know that there is a group of our citizens that hesitate – albeit in a groundless thought – to get a COVID-19 vaccine,” the president said recently during an ATV broadcast.

“With Turkovac, which has been produced by our own scientists in Turkey, I call upon those citizens to get their jabs as soon as possible,” he added.

Turkey jumped into action after the first coronavirus case was reported in March 2020 and launched studies to develop its first vaccine to combat the outbreak.

Among the vaccine studies supported by the Presidency of Turkish Health Institutes (TÜSEB) and the Scientific and Technological Research Council of Turkey (TÜBITAK), the inactive vaccine developed by Erciyes University showed the fastest progress.

While the development process for Turkovac began in April last year, the preclinical stages, where animal trials were conducted, were successfully concluded in October 2020.

Phase 1 studies for the vaccine kicked off the following month and it was administered to 44 volunteers. Phase 2 studies were launched on Feb. 10, 2021, with 250 volunteers. With both phases showing positive data, authorities moved onto Phase 3 of the development process.

As part of the Phase 3 studies, the first dose of the vaccine was administered on June 22, 2021, in a program in which Erdoğan participated and announced the name of the vaccine – Turkovac.

Thousands of volunteers, who had not been infected with COVID-19 or had gotten vaccinated before, were given Turkovac as part of the Phase 3 studies.

In October this year, Turkovac was administered as a booster shot. Volunteers who previously received two doses of the Chinese Sinovac vaccine were given Turkovac or Sinovac, depending on their personal preference.

Speaking at the production facility of the vaccine, Koca said public hospitals would start using it after approximately 10 days.

The emergency authorization application for Turkovac was submitted to the Turkish Medicines and Medical Devices Agency (TITCK) last month.

Since early in the vaccine’s development, Erdoğan has vowed to make it available globally, stating it will benefit all.

"Our COVID-19 vaccine, Turkovac, which has come to the production and usage stage by receiving the necessary approvals, is a symbol of our efforts to protect our nation against the pandemic in the most effective way," Erdoğan said in a video message to the laboratory in southeastern Şanlıurfa province, where the vaccine research and production is being conducted.