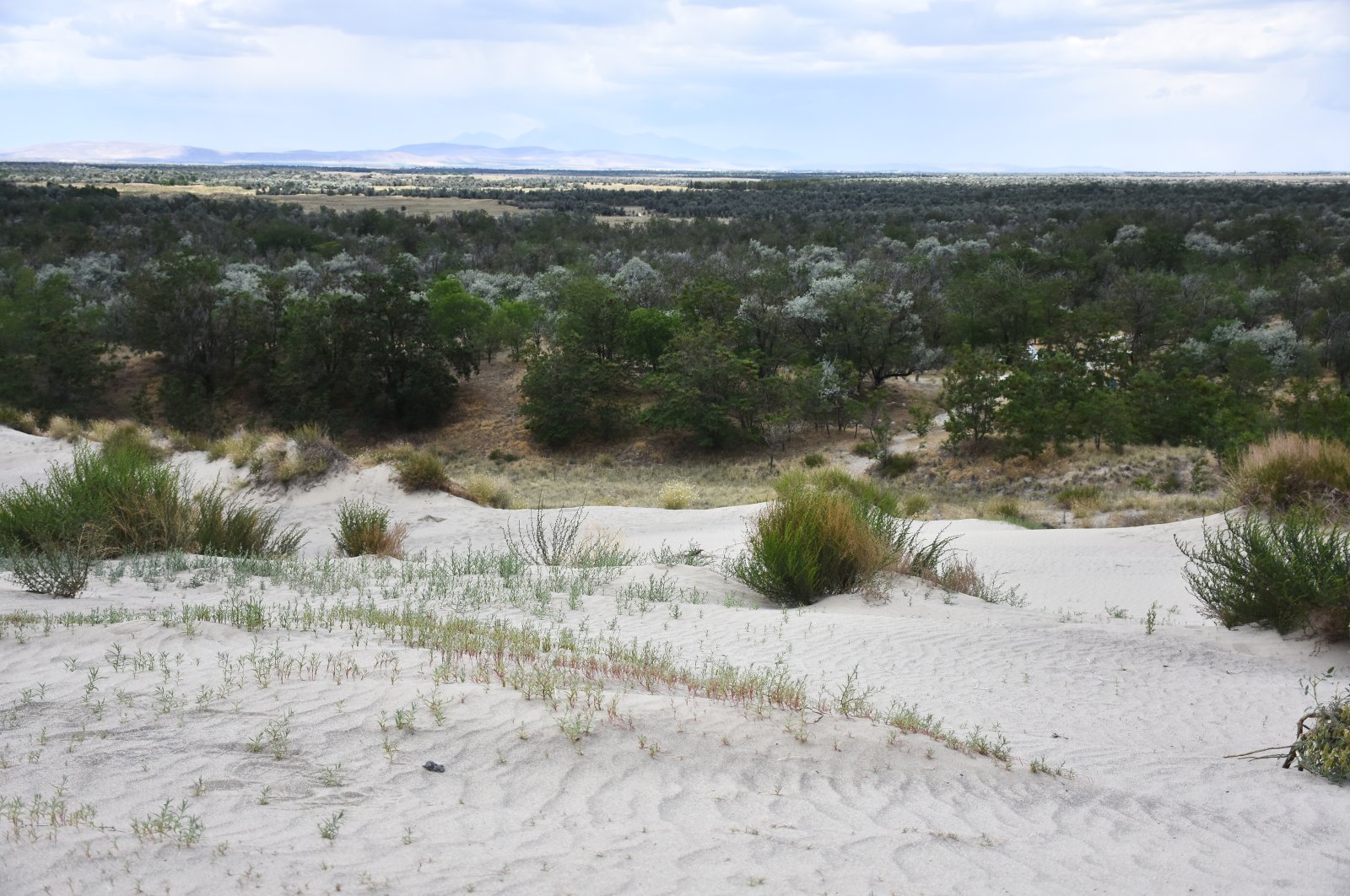 Facing the fallout of climate change, the country has intensified its efforts to improve its land and fight erosion with mass planting and other measures. Thus far, Turkey has recovered about 9.8 million hectares of land

On Thursday, Turkey marked World Day to Combat Desertification and Drought. For a country hosting diverse agricultural lands, these two risks stemming from climate change are something not to underestimate. The government is pursuing efforts to that extent and by the end of 2020, it managed to rehabilitate lands amounting to about 9.8 million hectares through tree planting, erosion control, improvement of spoiled forests damaged in fires and recovery of pastures. It aims to decrease the yearly amount of lands carried away by erosion to 130 million tons within the next two years.

The government unveiled an 11-year action plan to fight against desertification in 2019 and started working on projections and mapping areas most likely to be affected by drought and desertification. “Hot spots” for the phenomenon were defined in 2020.

The country is among the top three in the world in terms of tree planting according to authorities and over the past two decades, increased its forest areas by 2.1 million hectares. By 2023, it seeks to make one-third of its total area covered by forests. The ambition might be challenging but given the country’s troubled past – where 500 million tons of land was lost to erosion in the 1970s – it is a necessity. By the end of last year, this number dropped to 140 million tons a year.

Software developed to track erosion is among the major contributors to the fight, along with rising public awareness. The software used nationwide by the Ministry of Agriculture and Forestry helps with the micromanagement of lands and the impact of erosion. The government also prepares tree planting action plans for dam basins to reduce the amount of soil accumulated at dam lakes and to preserve basins. Flood control projects are also underway in basins exposed to floods.

In its fight against drought, the government promotes the cultivation of crops that are sustainable during lengthy droughts. Farmers are given incentives – including funds to grow such crops – especially in areas not previously used for agricultural activities or abandoned after past dry seasons. Drip irrigation, an irrigation technique that saves water, is also promoted.

Karapınar, a district in the country’s breadbasket Konya, is an example of efforts that have paid off in the fight against erosion. Once dubbed the “place where the land ended” because of massive erosion, Karapınar was even set to be relocated in the past due to an end to its agricultural activities, the main livelihood of its population. Years later, it is now dubbed a “blossoming desert” as it is dotted with ubiquitous trees.

Wind erosion was so prevalent seven decades ago, it bit off large chunks of land and moved them away, damaging 103,000 hectares of ground. Karapınar, which means "black spring" in Turkish, was actually the driest area in the larger Konya basin, a region with Turkey's lowest precipitation. In the 1950s, it started evolving into a desert, with sand carried by strong winds blanketing agricultural lands. Locals, cooperating with authorities, started taking action in 1959, first erecting high fences around an area of 160,000 decares of land. Canes and tall grass were planted to prevent winds from reaching the crops and these efforts were followed by a mass planting drive. Years later, 42,000 decares of land were regained for agricultural purposes.

Nowadays, green is the dominant color in Karapınar. Cihan Uzun, the head of the ministry's Soil, Water and Deserting Control Research Institute says Karapınar is an example of mankind’s struggle against the devastating impact of desertification.

“Life was unbearable in the 1950s here because of sandstorms. The entire land was covered with sand and some locals migrated to other places. Later, the government and locals launched probably Turkey’s first battle against this harmful phenomenon. They built ‘wind curtains’ against winds whose speed reached 110 kilometers per hour (68 miles per hour). In the following years, they planted trees everywhere; trees able to grow in a place which receives only up to 300 millimeters (11.8 inches) of precipitation yearly,” he told Anadolu Agency (AA) on Thursday.

Today, a small patch of “desert” land remains in Karapınar, deliberately left unattended to demonstrate the impact of desertification on future generations. A few kilometers away from the dunes, a lush forest and pastures can be found. Uzun says every year, hundreds of researchers from around the world visit Karapınar to see how it won the battle against desertification. He said Karapınar vastly improved in terms of agricultural activities and it contributes TL 2 billion ($231 million) to the Turkish economy every year in this field.

Desertification affects the lives of approximately 2 billion people worldwide, turning them into "ecological migrants," according to the head of a nonprofit environmental group.

Speaking to AA, Deniz Ataç – CEO of the Turkish Foundation for Combating Soil Erosion for the Reforestation and the Protection of Natural Habitats (TEMA) – said that land degradation causes an 11% reduction in food production. "Land degradation is the reduction of land productivity, biodiversity, carbon sequestration potential and all ecosystem services of nature, including wetlands. In summary, (desertification) means impoverishment, lack of food, more drought and thirst," she said, adding that desertification refers to land degradation in arid areas.

Highlighting that arid regions have fragile ecosystems that will suffer the most from climate change, Ataç stated that droughts in these arid regions are expected to increase and intensify.

"12 million hectares (29.7 million acres) of agricultural land are degraded annually due to erosion, improper soil management, excessive use of chemical fertilizers, use of pesticides for agricultural purposes, excessive and incorrect irrigation, and pollution," she added.

"With the destruction of rainforests, tropical regions with a humid climate have begun to face the danger of desertification even in this humid climate ... Desertification affects the lives of approximately 2 billion people, reducing their well-being, (causing) food shortages and turning people into ecological migrants," she stressed.

In response to a question as to what steps should be taken to mitigate desertification and drought, Ataç said that preventing land degradation, immediately starting restoration activities and expanding sustainable agricultural practices are the priority. "Restoration work and preventing land and forest destruction are also important as part of combating biodiversity loss and climate change as well as reducing its effects," she noted.

Stating that the destruction of forests and natural vegetation increases drought, Ataç said that tropical regions with a humid climate are under the risk of desertification, as a typical example.

Touching on TEMA's ongoing efforts in the field, she noted that the foundation continues its activities in five key areas including forestry, advocacy and environmental policies, rural development, education and organization, and volunteering.

She added that TEMA currently carries out two important projects. One of them is the Hayrettin Karaca Natural Old-Growth Forests Project that was launched to determine and map old-growth forests in Turkey's eastern Black Sea region.

The project was named after Hayrettin Karaca, the founder of TEMA, who was also known as "Grandpa Earth." He died in 2020 at the age of 97.

Another is the Nihat Gökyiğit Biodiversity Project, which was launched to raise public awareness and to minimize human-induced biodiversity loss.

Founded in 1992, TEMA is the country's leading environmental advocacy group that focuses on preserving nature by combating erosion and carrying out forestation projects.