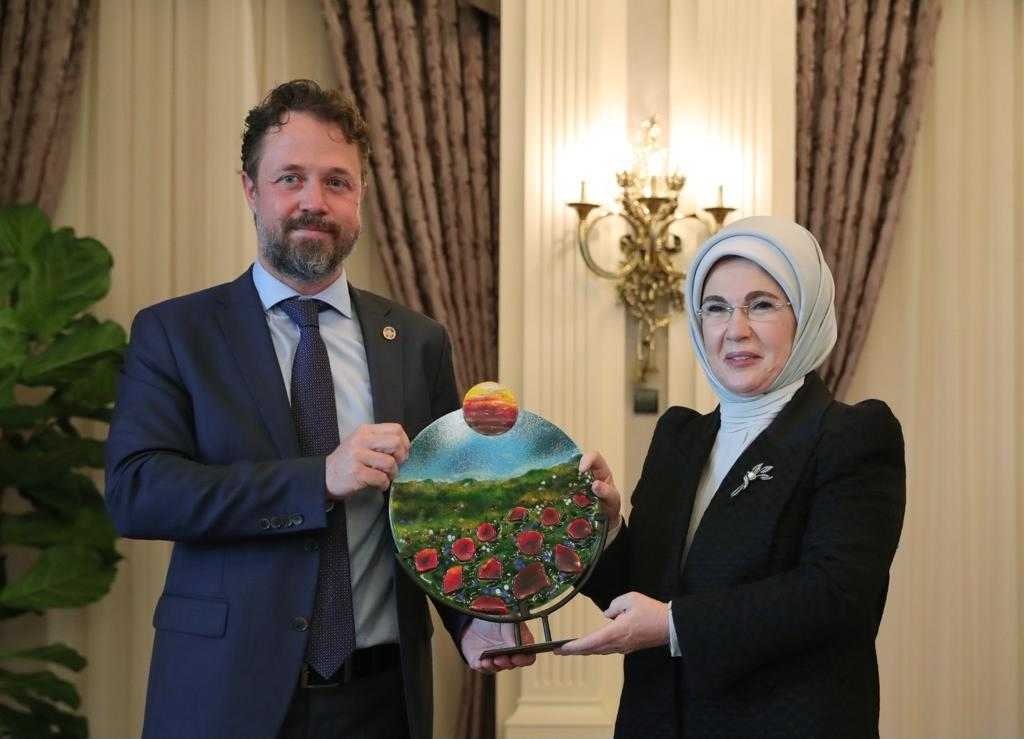 First lady Emine Erdoğan was on stage in the capital Ankara on Thursday as an ambitious project she helped launch four years ago received top recognition from the United Nations.

The United Nations Development Program (UNDP) Turkey representative Claudio Tomasi presented the award to first lady Erdoğan for the Zero Waste project, the first program from Turkey to win a Sustainable Development Goals Action Award. The award recognizes the project’s contribution to responsible consumption and production, one of the 17 Global Goals for Sustainable Development set out by the U.N.

First lady Erdoğan was joined by the Minister of Environment and Urban Planning Murat Kurum, deputy minister and Turkey’s chief climate envoy Mehmet Emin Birpınar, Şahika Ercümen, a record-holding diver and supporter of the project, as well as heads of several environmental organizations active in Turkey.

Speaking at the event, Emine Erdoğan said they shared the common language of “a special awareness” with the UNDP and together they created a synergy as “friends of the environment.” She said she received the award “on behalf of all beautiful hearts dedicated to nature.”

“The Zero Waste project is a small step in the responsibility of leaving a livable world to future generations. We hope to make this effort more efficient with the cooperation of our public and non-governmental organizations,” she said. “Nature is a friend entrusted to us. Just like treating a friend, humans must behave the same way with nature. But unfortunately, the effects of industrialization have transformed this understanding, as in the whole world. As the consumption society expanded, environmental problems increased. Modern humans are alienated from nature and even attempted to dominate it. What we need today is to close the distance between us and nature – that has become “the other.” It is to regain its friendship. We share the universal values of organizations that offer global solutions, such as the United Nations. We try to contribute to these values with our cultural experiences,” she added.

The Zero Waste project was launched in 2017 under the auspices of Emine Erdoğan. It focuses on efficient waste management by preventing wastage if possible and recovering it at its source separately to enhance recycling. It covers everything from plastic waste to food waste, which is recycled into common items, compost for plants and more.

In its first stage, the project cooperated with the Ministry of National Education and an environmental non-profit to launch an online education portal to raise awareness on the issue among children. It was followed by the installation of recycling bins at schools across the country and thousands of students were educated on how to separate waste and recycle it. Later, the project was widely embraced by the public and public agencies, eventually leading to amendments to environmental regulations. These include a landmark fee for plastic bags that aimed to discourage their use. In 2020, the Ministry of Environment and Urban Development founded the Turkish Environment Agency and launched a deposit-return scheme that involves refunds for packaging if it is returned intact.

The project also branched out into maritime pollution with “Zero Waste Blue,” a new stage launched in June 2019. Zero Waste Blue brought together 760 companies and nongovernmental organizations for cleaning up the seas.

Between 2017 and 2020, Turkey saved 397 million tons (360,152 million kilograms) of raw material, 315 million kilowatts per hour of energy, 345 million cubic meters of water and 50 million barrels of oil, thanks to the Zero Waste project. In the same period, 17 million tons of usable waste were collected, 2 billion tons of greenhouse gas emissions were prevented and 209 million trees were saved by the project. The economic savings attained with these actions are calculated at TL 17 billion (over $3 billion). The project aims to generate employment for 100,000 people and make TL 20 billion of annual savings.

The presidential complex was the first to switch to a zero-waste scheme and it was followed by ministries. Since 2017, thousands of public buildings have joined the campaign with recycling almost all the waste they produce, from paper to food. Authorities aim to expand the project to 400,000 buildings in 2023, the centenary of the Republic of Turkey. Last year, the number of buildings that adopted new recycling practices thanks to the project, reached 76,000 buildings. The recycling rate, which was 13% at the beginning of the project, reached 19%.

Speaking at the award ceremony, Claudio Tomasi said the project was important for promoting the efficient use of finite resources, curbing and eliminating waste by prevention, minimization, reuse and separation at the source. “Economic sustainability cannot be achieved without true environmental sustainability,” he said.

"Achieving economic growth and sustainable development requires that we urgently reduce our ecological footprint by changing the way we produce and consume goods and resources. Encouraging industries, businesses and consumers to recycle and reduce waste is extremely important to achieve Sustainable Development Goal 12: responsible consumption and production. Our goal is to create a society that produces and consumes responsibly. We will produce, but the products we produce must also be recycled. Waste must be minimized. I think this is how we come closer to being a zero-waste society. With just nine years left, we are in a period in which we need to engage in maximum action to deliver the Sustainable Development Goals by 2030. The COVID-19 pandemic urges everyone to work together towards a better recovery, keeping the goals as our compass for transformative action. Transformation is possible and every individual action matters. We must make 2021 a turning point for people and the planet. In order to succeed, we need bold, ambitious plans and we must take action quickly and decisively now.” Tomasi added.

Turkey uses about 10 million tons of glass, plastic, aluminum and metal packaging every year according to figures and plans to increase the recycling rate for packaging to 65% by 2026.