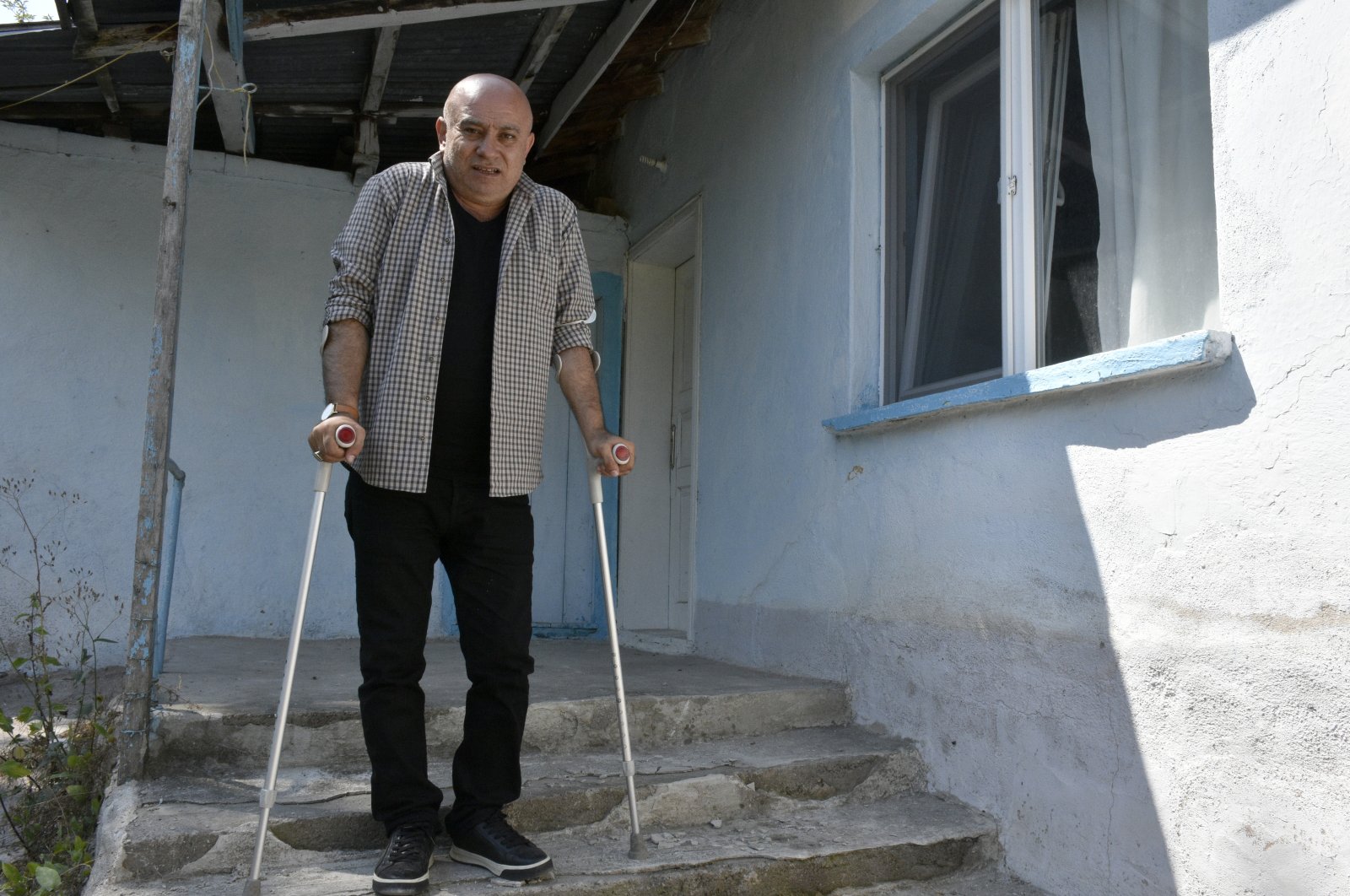 Yaşar Parlak stands outside his house, leaning on his crutches, in Gümüşhane, northern Turkey, July 14, 2021. Parlak was left injured by putschists in Istanbul in 2016. (AA PHOTO)
by Daily Sabah with AA Jul 15, 2021 5:00 pm
RECOMMENDED

Memories linger for those who fought the putschists five years ago, when the Gülenist Terror Group (FETÖ) tried to seize power through its infiltrators in the army.

They are proud of their brave actions that helped eliminate the group's plot.

Among the veterans is Yaşar Parlak, a 52-year-old man who hit the street after President Recep Tayyip Erdoğan called his nation to not stand idly before the putschists. Parlak joined a group that gathered at a police station nearby his house in Istanbul and endeavored to prevent putschists from occupying the station. Upon learning that the putschists were occupying the building of national broadcaster TRT, Parlak left the police station with his fellow companions.

On his way, a police officer warned him and others not to get any closer, as it could be dangerous. But Parlak continued on, as he believed there was no reason for him to be afraid.

"Why would soldiers open fire on us? After all, they are our soldiers ... That is what we thought. We moved forward along with a group of 50 ... I saluted some soldiers. Then these soldiers and others began shooting at us," he said.

Parlak said three people in the group were killed and 49 others were wounded. He was shot multiple times, also suffering from shrapnel pieces. He was confined to crutches after sustaining severe injuries that night. The putschists also fired on ambulances that arrived at the scene to transfer them to nearby health facilities. While he was shocked by what happened, the police officer who warned him previously now pulled him to safety and he was taken to a hospital.

Despite going through numerous medical operations and suffering permanent physical damage, Parlak remained undaunted, as he said he would not hesitate to act against putschists in the future if need be.

Another veteran, Turgut Aslan, said the fight against FETÖ was still ongoing in Turkey and people must be vigilant against terrorist groups, whether it be FETÖ or some other one, for the sake of the country’s prosperity. Aslan was the head of the counterterrorism department of the police force when putschists took him hostage on the night of the coup attempt, and his guard was killed while he was shot in the head twice by FETÖ members. Despite being seriously wounded, Aslan survived and underwent five brain surgeries and remained in a coma for five months. When he first woke up, he asked: "Was Fetullah Gülen successful?"

Aslan, who is also a chief advisor to the president, said he had instructed his units to closely watch FETÖ leader Gülen and his followers when he was the head of the anti-terrorist department and later issued a 60-page report that eventually led to the designation of FETÖ as an armed terrorist group. Stressing that the fight against terrorism would never end, he called on FETÖ members to surrender to the Turkish state and be held accountable for their crimes.

Çiğdem Sürücü, mother of Yakup, a police officer who was killed on the night of the coup attempt when an F-16 piloted by one of the putschists struck the headquarters of special units of the police force in Ankara, is still haunted by the death of her beloved son yet is proud of him.

The tearful mother regularly visits her son’s grave and prays for him and other brave souls who lost their lives at the hands of FETÖ members, but she gets heartbroken every time she encounters children of her late son’s friends as they remind her of Yakup’s lost future.