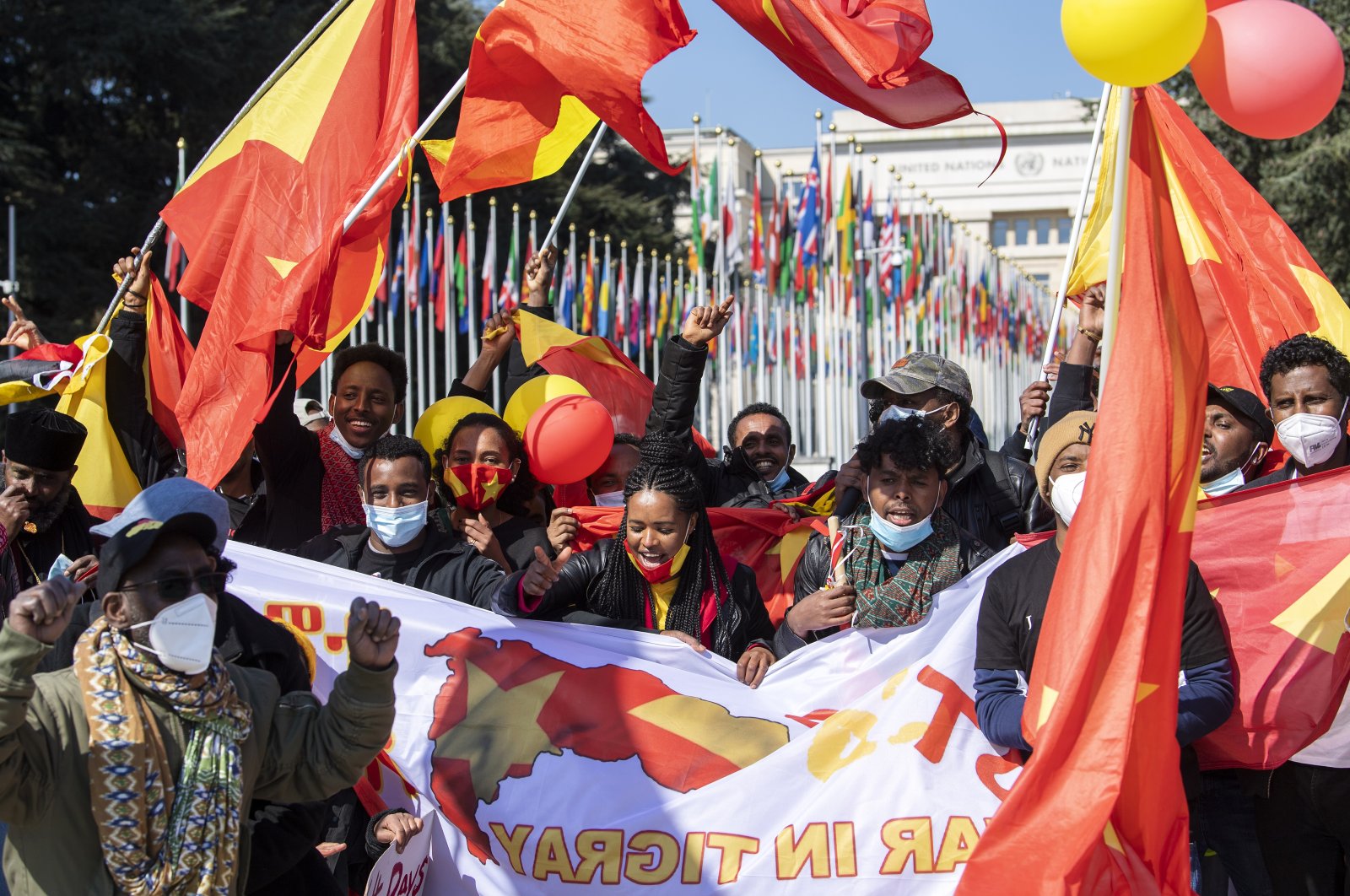 Members of the Ethiopian Tigray community in Switzerland protest against the Ethiopian government for what they call a civil war in Tigray and genocide on Tigray people on the "Place des Nations" in front of the European headquarters of the United Nations, in Geneva, Switzerland, April 16, 2021. (Keystone via AP)
by Agencies Apr 19, 2021 9:12 pm
RECOMMENDED

At least 14 civilians and one police officer have died in the latest bout of ethnic violence in Ethiopia's Amhara region, officials said Monday, adding to a toll already in the hundreds.

Dozens of homes have burnt to the ground and thousands of civilians have been displaced since Wednesday alone, many of them now huddling in schools and stadiums, the officials said.

Ethiopia's military said Sunday it was sending in troops to try to calm the situation, which has amplified security concerns ahead of national elections planned for early June.

The Amhara region is dominated by the ethnic Amhara group, Ethiopia's second-largest.

The violence there has hit the North Shoa zone and the Oromo special zone, the latter of which is populated mainly by Oromos, the country's largest group.

After a short period of calm, it flared up again last week.

"In this second round I've treated more than 30 injuries, and more than 10 people were killed," Wondwossen Zeleke, a health official in the North Shoa district of Antsokia, told AFP Monday.

"I'm seeing unprecedented killings, displacement and mass arson of homes. All those victims were by gunshots," he said.

Teshome Yilma, administrator of North Shoa's Majete city, told AFP at least four farmers were killed in one area and a police officer shot dead in a separate incident.

Both officials said they expected the true toll would be much higher once communications were fully restored in the area.

They pinned the violence at least partly on the Oromo Liberation Army (OLA) rebel group.

But OLA Spokesperson Odaa Tarbii told AFP his group did not have a presence in the area and dismissed the claims as a pretext to drive Oromos out of Amhara.

Prime Minister Abiy Ahmed, winner of the 2019 Nobel Peace Prize, is under mounting pressure to address the violence.

The National Movement for Amhara, an opposition political party, on Monday criticized his response and said Amhara special forces should be empowered to protect civilians in the affected areas.

"It seems like the government is preventing the Amhara special forces from freely operating in the area and from taking down these armed criminals," Dessalegn Chanie, a senior member of the party, told AFP, adding he did not trust the military to restore order.

Abiy came to power in 2018 after several years of anti-government protests staged by Amhara and Oromo youth.

But his tenure has been marred by ethnic violence, and analysts warn national elections scheduled for June 5 could bring further insecurity.

Meanwhile, the European Union on Monday said it would allocate 53.7 million euros ($64.6 million) in humanitarian aid for the most vulnerable people in Ethiopia, including those affected by the conflict, according to a statement.

EU Commissioner for Crisis Management Janez Lenarcic, who is expected in Ethiopia on Tuesday, said the conflict in the Tigray region has exacerbated an already difficult situation in the Horn of Africa country.

"Humanitarian needs, even basic survival needs like food security, health and shelter, are growing. What is more, violence is increasing in several parts of the country ... On top of that, five months into the conflict, the situation in Tigray remains severe despite slight improvements, keeping millions of people in need of assistance, especially in rural and hard-to-reach areas," he said.

Lenarcic will meet Ethiopian Deputy Prime Minister Demeke Mekonnen when he arrives in Ethiopia, according to the statement.

He said the key priority remains to ensure humanitarian access to all those in need in the Tigray region.

The government of Ethiopia is working to reach six Woredas (districts) that have not received any food assistance, targeting approximately 300,000 people, according to the United Nations.