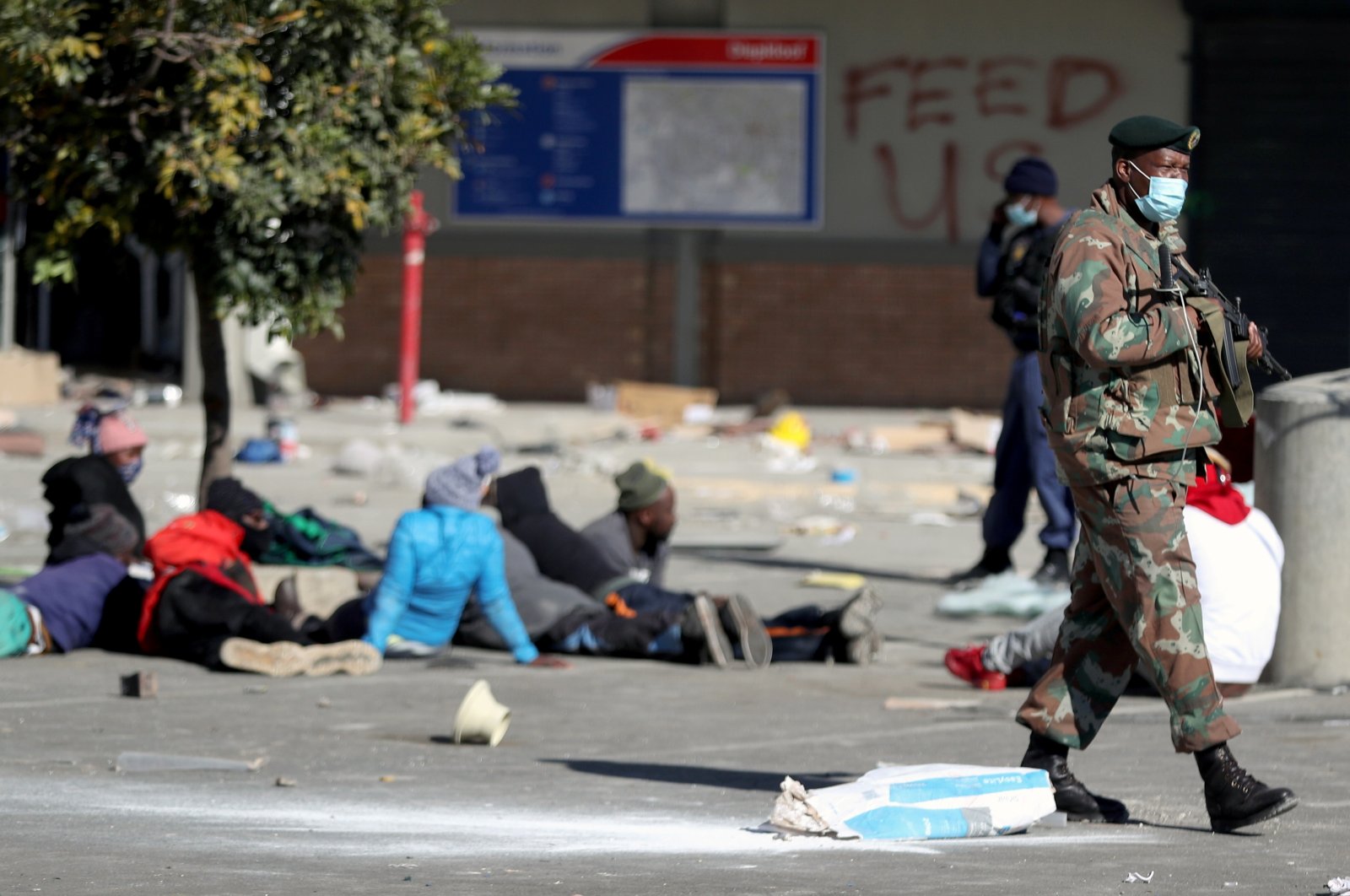 A member of the military keeps guard next to suspected looters outside Diepkloof mall as the country deploys army to quell unrest linked to jailing of former President Jacob Zuma, in Soweto, South Africa, July 13, 2021. (Reuters Photo)
by Agencies Jul 13, 2021 11:45 am
RECOMMENDED

Another 22 people have died during unrest raging in South Africa, a provincial official said Tuesday, taking the national death toll from days of violence to 32.

"These were people killed during stampedes as protesters ran riot," he said, without specifying which parts of the province.

What began over the weekend as protests against Zuma's 15-month jail term for contempt of court has rapidly devolved, in some instances, into large-scale, bloody riots.

The province of Gauteng, which includes the cities of Pretoria and Johannesburg, and Zuma's eastern home province of KwaZulu-Natal, have been particularly impacted and will now see the military assisting local law enforcement agencies.

"The duration and number of deploying soldiers will be determined based on the assessment of the situation on the ground by the relevant law enforcement agencies," the Defense Department said, according to Agence France-Presse (AFP).

The state's Minister of Defense Nosiviwe Noluthando Mapisa-Nqakula said Tuesday that South Africa was not at the stage of a state of emergency yet.

In the port city of Durban, the local government said the protests could cause problems with municipal utility services such as the water supply, as urgently needed repairs could not be carried out.

Zuma was sentenced last week to 15 months in prison for contempt of court, which he began serving late Wednesday. He faces a commission of inquiry into various corruption charges during his time in office, from 2009 to 2018, but had failed to comply with a court summons.

Witnesses told of people driving up to stores in cars and walking away with refrigerators, beds, clothes, shoes and even furniture. The outnumbered police officers would frequently watch powerlessly from the sidelines, and sometimes even be assaulted by rock throwers.

The tumult has brought buses, trains and traffic to a standstill, disrupting transportation and supply chains in one of Africa's biggest economies.

Zuma's legal battle may have sparked the protests, but they are also being read as an expression of anger and frustration over the country's high unemployment and growing inequality, which have only been exacerbated by the coronavirus pandemic.

"Over the past few days and nights, there have been acts of public violence of a kind rarely seen in the history of our democracy," Ramphosa said late Monday.

"Property has been vandalized and destroyed. Shops have been looted. Law-abiding citizens have been threatened and intimidated. Workers are scared that they may not be able to return to work. People have died ... This is not who we are as a people," he said.

In his remarks, the president addressed the problems that were tearing apart South Africans, saying the pandemic and the violence had "thrown into stark relief what we already knew: that the level of unemployment, poverty and inequality in our society is unsustainable."

At an emergency COVID-19 ward run by a charity in southern Johannesburg, medics wheel gasping patients to their beds, rush from room to room with oxygen cylinders and pat the back of someone in the grip of a coughing fit.

The scenes in the converted community hall are a reminder of how badly South Africa has been hit by its third and most debilitating COVID-19 wave yet, as the infectious delta variant surges through a mostly unvaccinated population.

"The delta variant has caused enormous strain on the resources ... Every hospital is getting strained, every healthcare worker is getting strained," said Fatimah Lambat, the doctor in charge of the ward set up by Gift of the Givers, a Muslim charity, to ease overloaded public hospitals.

"It's very draining ... patients are still phoning me from the community for help. And when we're full here, we still need to help them," she said, according to Reuters. "We don't want them to be lost."

With South Africa recording an average of about 20,000 cases a day and nursing active cases, cumulatively, of more than 10 times that, Africa's most economically advanced nation has also been its worst hit by the virus, with 64,000 deaths.

A vaccination campaign has been slow, with just 4.2 million doses administered to a population of 60 million. Officials aim to reach a vaccination rate of 300,000 a day by the end of August.

Doctors say they have never had to deal with so many COVID-19 infections all at once. Hospitals in the largest city Johannesburg, where the latest wave started, are full.

For 79-year-old Catherine Naidoo, the most terrifying thing about falling gravely ill was knowing that so many had died.

"You don't know what lies ahead. You look at the news and see how people are passing away," the recovered COVID-19 patient said, lying on her back and adjusting her mask. "It was the most frightening experience."

Behind another curtain, medics covered head to toe in protective gear adjusted the drip of a sleeping patient, while in another, a medic was getting a patient to do some exercises before getting her to blow into a tube to test her lungs.