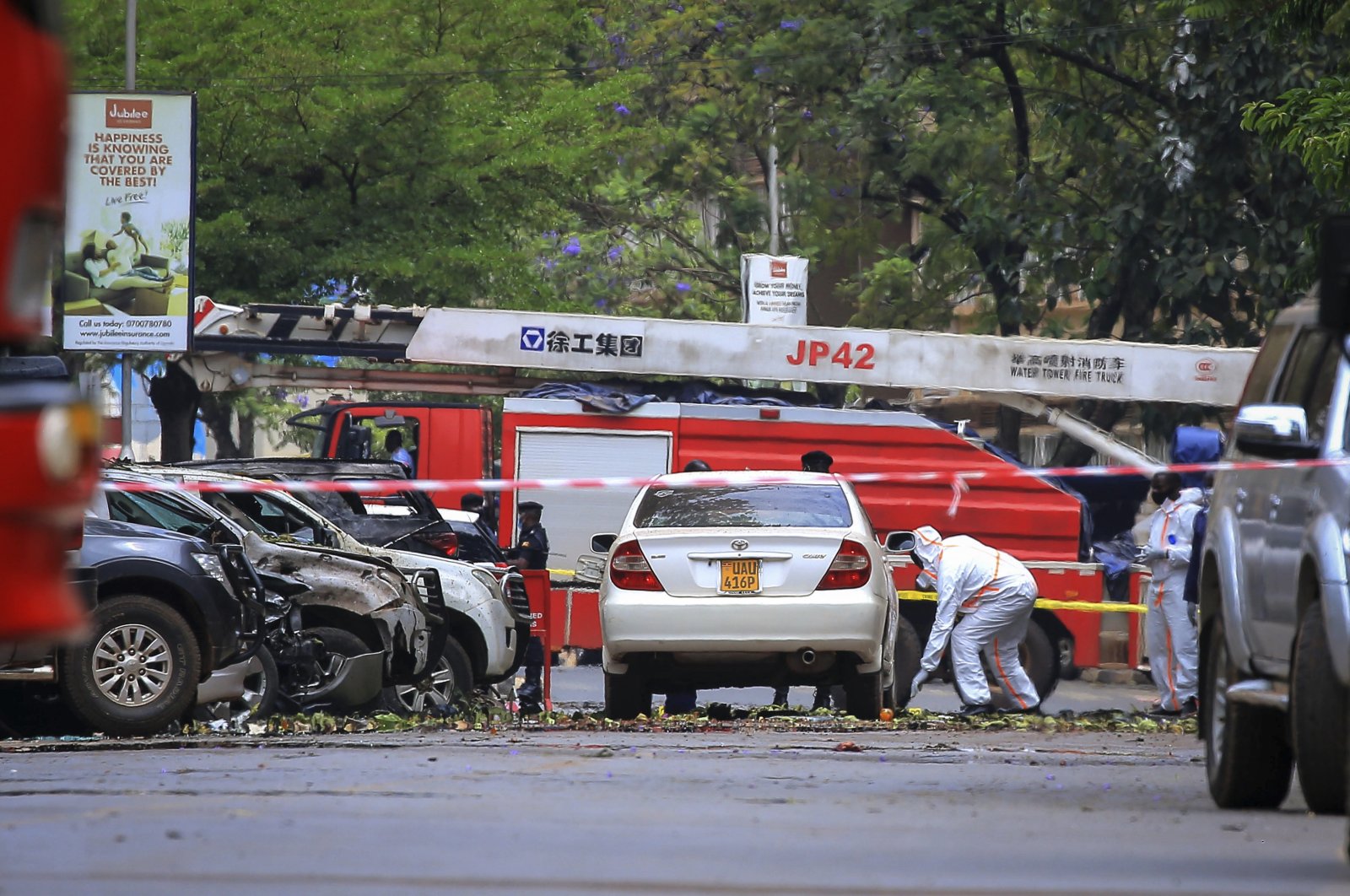 Security forces and forensics officers examine the scene of a blast on a street near the parliamentary building in Kampala, Uganda, Nov. 16, 2021. (AP Photo)
by Agencies Nov 16, 2021 2:26 pm
RECOMMENDED

At least 33 people are being treated at the city's main public referral hospital, Enanga told reporters. Five are critically injured, he said.

An eyewitness video posted online showed a plume of white smoke rising from the blast scene near the police station.

People are scampering to leave the city, many on passenger motorcycles.

Ugandan officials have been urging vigilance in the wake of a string of bomb explosions in recent weeks.

One person was killed and at least seven others wounded in an explosion at a restaurant in a suburb of Kampala on Oct. 23.

Another explosion two days later on a passenger bus killed only the suicide bomber, according to police.

Even before those attacks, the U.K. government had updated its Uganda travel advisory to say extremists "are very likely to try to carry out attacks” in this East African country. ADF, an affiliate of the Daesh terrorist group in central Africa, claimed responsibility for the attack on the eatery.

That group has long been opposed to the rule of longtime President Yoweri Museveni, a U.S. security ally who was the first African leader to deploy peacekeepers in Somalia to protect the federal government from the extremist group al-Shabab. In retaliation over Uganda's deployment of troops to Somalia, the group carried out attacks in 2010 that killed at least 70 people who had assembled in public places in Kampala to watch a World Cup soccer game.

But the ADF, with its local roots, has proved more of a headache to Museveni.

The group was established in the early 1990s by Ugandan Muslims who said they had been sidelined by Museveni's policies. At the time, the rebel group staged deadly terrorist attacks in Ugandan villages as well as in the capital, including a 1998 attack in which 80 students were massacred in a frontier town near the Congo border.

A Ugandan military assault later forced the rebels into eastern Congo, where many rebel groups are able to roam free because the central government has limited control there.

Reports of an alliance between the ADF and Daesh first emerged in 2019, according to the SITE Intelligence Group, which tracks the online activities of extremist organizations.