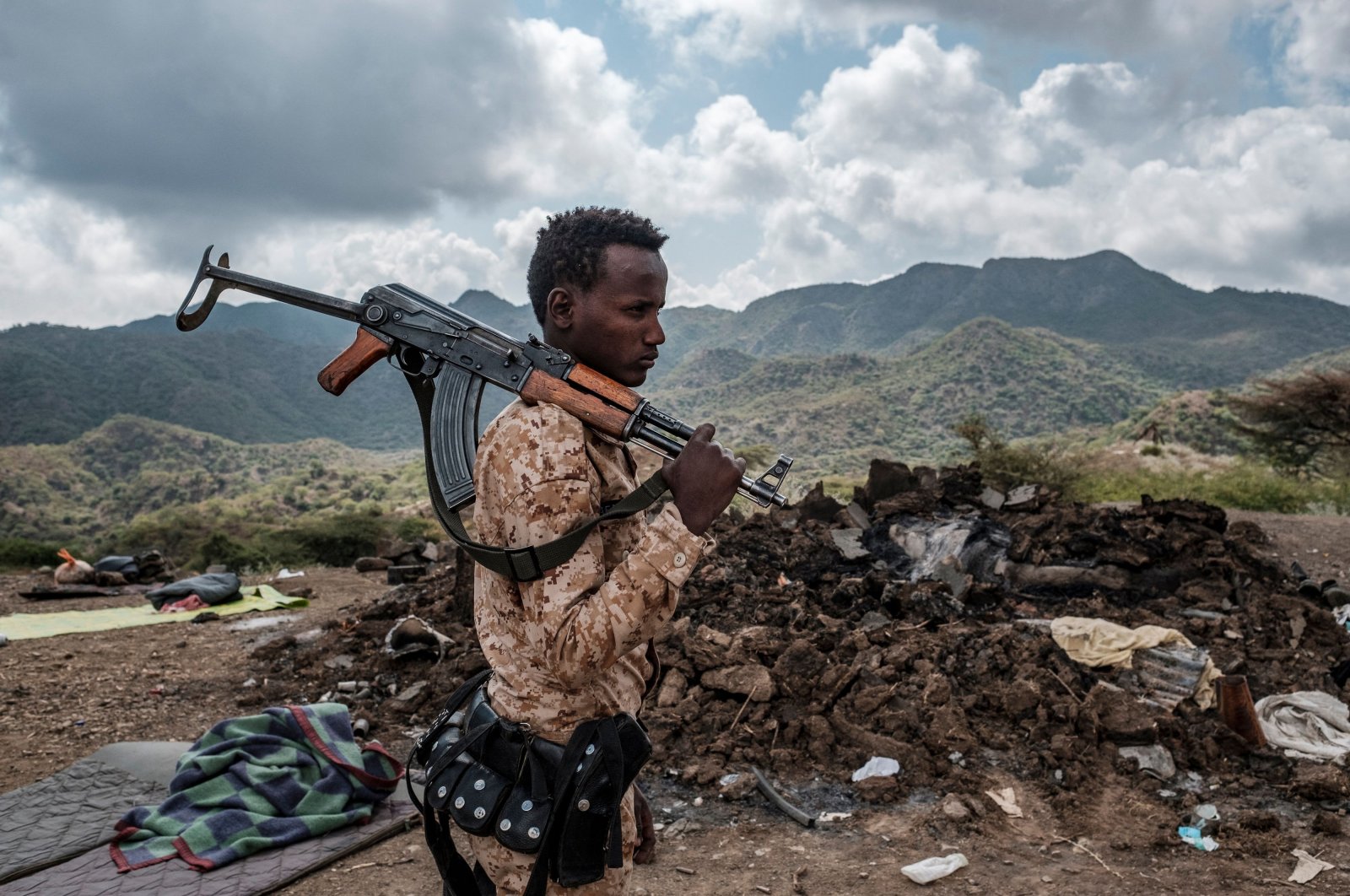 A member of the Afar Special Forces stands in front of the debris of a house in the outskirts of the village of Bisober, Tigray Region, Dec. 9, 2020. (AFP Photo)
by French Press Agency - AFP Jul 25, 2021 5:58 pm
RECOMMENDED

Amhara borders Tigray to the south, and the two regions are embroiled in a decades-old land dispute that has become central to the eight-month-old war in Tigray.

Together the two statements highlight the potential for the Tigray war, which Prime Minister Abiy Ahmed declared all but over in late November, to draw in the rest of the country.

"Starting from tomorrow (Monday), I call on all people of age who are armed either at governmental or private level to mobilize for a survival campaign," Agegnehu said.

Abiy, winner of the 2019 Nobel Peace Prize, sent troops into Tigray last November to oust the region's ruling party, the Tigray People's Liberation Front (TPLF), a move he said was in response to TPLF attacks on federal army camps.

The fighting dragged on for months before the war took a stunning turn in late June, with pro-TPLF fighters reclaiming the Tigray capital Mekele and Abiy declaring a unilateral cease-fire.

Yet clashes have continued and officials from six regions and the city of Dire Dawa have since said they would send troops to back government forces.

The war has already killed thousands and, according to the United Nations, pushed hundreds of thousands into famine.

"We will not rest"

Rebel spokesperson Getachew Reda has vowed to "liberate every square inch of Tigray," including its western and southern portions, disputed territories that have been occupied by Amhara forces since the beginning of the war.

Thousands of Amhara militia fighters have mobilized in recent days and headed toward the Tigray-Amhara border, but Getachew has boasted of swift gains against what he dismisses as "ill-trained peasant militias."

Agegnehu, the Amhara president, on Sunday said the opposite was true and that the TPLF was suffering heavy losses.

A communications blackout in Tigray makes it difficult to confirm who holds which territory."We will not rest until the TPLF is laid to rest," Agegnehu said, though he said the Amharas' campaign was not against Tigrayan civilians.

"The people of Tigray are our brothers. All Tigrayans are not our enemies."

"We're still in a war," he said, adding that the TPLF continued to hold territory in the districts of Awra, Ewa and Gulina.

An official told AFP last week that at least 20 civilians had been killed and 70,000 displaced.

Ahmed said he did not have information on fatalities but confirmed the widespread displacement.

"More than 75,000 members of the pastoral community who used to live in the area have been displaced and are currently in different camps and shelters," he said.

The road into Ethiopia via Djibouti's port, located east of Afar, is vital for the landlocked country, raising speculation that Tigrayan rebels might try to choke it off.

But Ahmed said Sunday so far the fighting had not approached it.