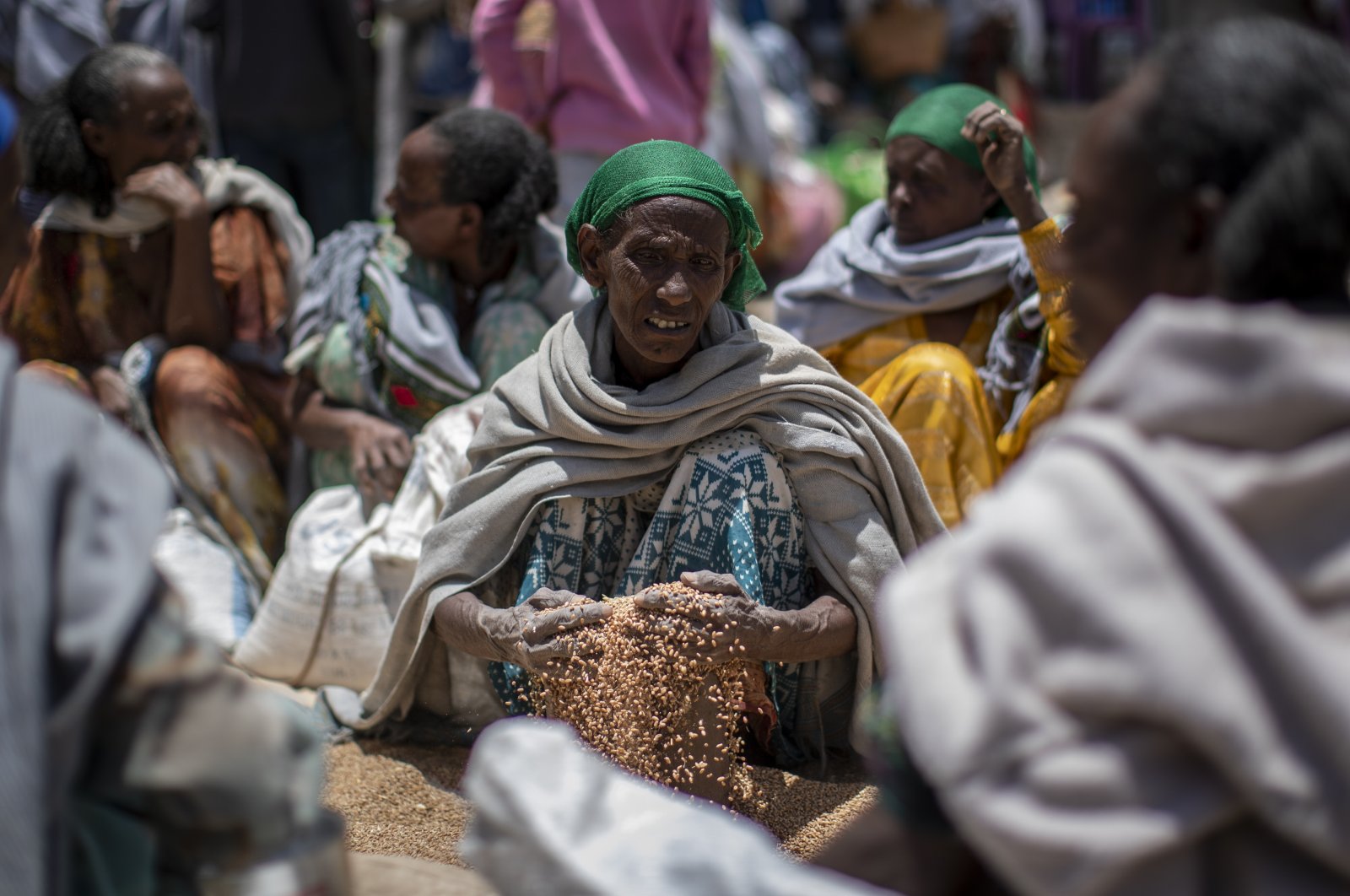 An Ethiopian woman scoops up grains of wheat after it was distributed by the Relief Society of Tigray in the town of Agula, in the Tigray region of northern Ethiopia, May 8, 2021. (AP Photo)
by French Press Agency - AFP Jul 03, 2021 12:50 pm
RECOMMENDED

More than 400,000 people are now suffering from famine in Ethiopia's Tigray region, a United Nations official said Friday, calling for immediate humanitarian action to help the millions affected by the brutal eight-month-long conflict.

Fighting between the Ethiopian government and the Tigray People's Liberation Front (TPLF) was reignited last month when the rebels launched a major counter-offensive that saw them retake their regional capital of Mekele.

This week two key bridges allowing desperately-needed aid into the region were destroyed, prompting fears the federal government was seeking to choke off humanitarian assistance – a charge Addis Ababa denied.

Friday saw the U.N. Security Council hold its first public meeting on a conflict that has left thousands dead and plunged hundreds of thousands into hunger.

Ramesh Rajasingham, Acting Under-Secretary-General for Humanitarian Affairs and Emergency Relief Coordinator, said that the situation had "worsened dramatically" as the conflict had reignited in recent weeks.

"More than 400,000 people are estimated to have crossed the threshold into famine and another 1.8 million people are on the brink of famine," he said. "Some are suggesting that the numbers are even higher. 33,000 children are severely malnourished."

"The lives of many of these people (in Tigray) depend on our ability to reach them with food, medicine, nutrition supplies and other humanitarian assistance," he added. "We need to reach them now. Not next week. Now."

Ethiopia has rejected charges that it planned to choke off aid to the region.

"The insinuation that we are planning to suffocate the Tigrayan people by denying humanitarian access and using hunger as a weapon of war is beyond the pale," Deputy Prime Minister Demeke Mekonnen told diplomats gathered at a hotel in the capital, Addis Ababa.

Officials are "using every ounce of our strength to extricate" Tigrayan civilians "from the dire situation they find themselves in," he added.

He said the move was in response to TPLF attacks on federal army camps and declared victory within weeks after federal forces took the regional capital Mekele.

But after the rebels – having rebranded themselves the Tigray Defense Forces (TDF) – retook Mekele and asserted control over most of the region, the government announced a unilateral cease-fire that the TDF has dismissed as "a joke."

"A cease-fire observed by all parties would not only facilitate the provision of humanitarian aid but would also be a starting point for the necessary political efforts to chart a way out of the crisis," DiCarlo said.

'Lives will be lost'

On Friday, the WFP said it had resumed aid operations after a two-day pause but added that lives were still in the balance after the two major bridges leading into Tigray were destroyed.

"Lives will be lost if supply routes into Tigray do not fully open and parties to the conflict continue to disrupt or endanger free movement of cargo for WFP and other emergency responders."

The U.N. has said one of the bridges was "reportedly" blown up by security forces from the Amhara region, south of Tigray, but the government on Friday blamed Tigrayan forces.

In his comments to diplomats Friday, Demeke reiterated the government's position that the cease-fire was motivated by humanitarian concerns and to facilitate farming.

But with electricity and telecommunications cut off, flights suspended and most roads into the region now impassable, U.N. officials and diplomats fear the situation could deteriorate further.

"A credible cease-fire means doing everything possible so that aid reaches the millions of children, women and men who urgently need it," EU foreign policy chief Josep Borrell said on Twitter.

Demeke also said that, following national elections last month that are expected to give Abiy a new term, the government was preparing for an "inclusive dialogue" to resolve the crisis. The polls were postponed in Tigray.

Such a dialogue has long been sought by diplomats lobbying for a political resolution of the war.

But in a closed question-and-answer session with diplomats, officials indicated that dialogue with the TPLF leadership remained off the table.

In May, lawmakers designated the TPLF a terrorist organization.

When pressed by diplomats on how that might affect whatever dialogue takes place, Demeke said some TPLF members were "innocent" and could be included, according to three attendees.

But both Demeke and Redwan Hussein, spokesperson for a government task force on the Tigray conflict, told diplomats that Addis Ababa was committed to "accountability" for TPLF leaders, the diplomats said.